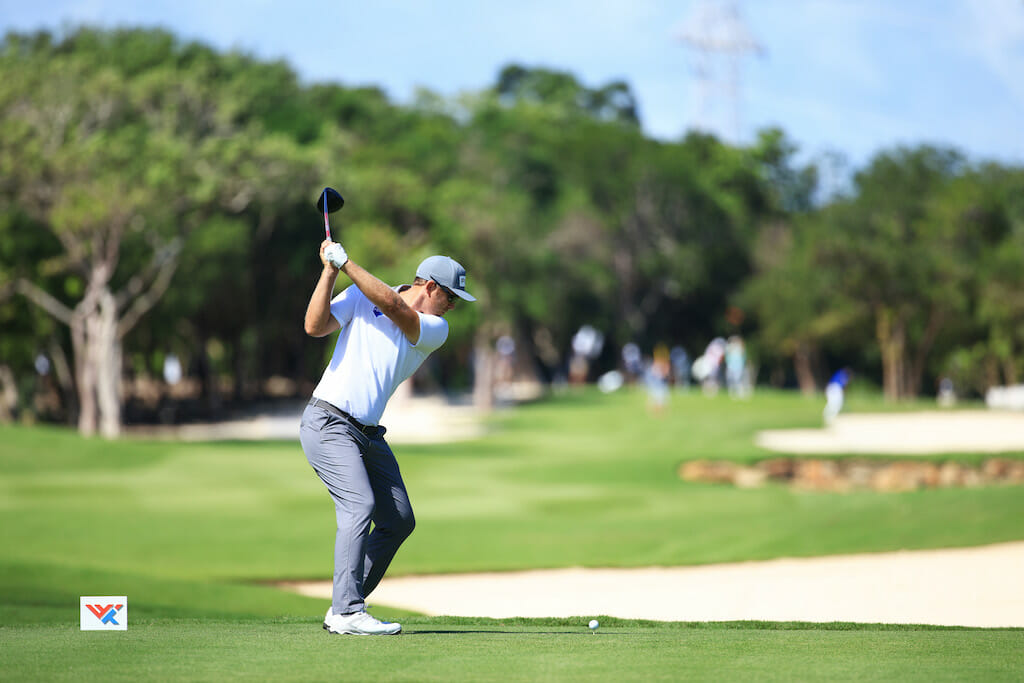 Seamus Power says he will take an aggressive approach on the final day of the World Wide Technology Championship at Mayakoba after working his way into the top-10 in Mexico after a strong moving day.

The Waterford man mixed five birdies and one bogey in a second consecutive four-under 67 that took him onto 11-under, good for a share of 10th heading the final day but eight shots off the lead held by defending champion Viktor Hovland.

The Norwegian was on song on Saturday, carding nine birdies in a career-best round on the PGA Tour – a flawless 62 that took him to 19-under overall and has him two clear of Talor Gooch with one round to play.

Gooch fired a 63 to move up to 17-under to assume the position of Hovland’s closest challenger, with Justin Thomas’ 64 taking him onto 16-under and within striking distance on day four.

It means Power would need a miraculous round to put himself in a position to win his second PGA Tour event, but the 34-year-old has a target in mind that he will try and hit at El Camaleon to at least give himself a chance of lifting the trophy.

“When the wind lowered you knew that you were going to have to get to 20 (under) or at least close. That’s still going to be the goal tomorrow,” said Power after his third round.

“Obviously that leaves me a lot of work to do but that’s why you’re here. You want to get as close to that winning number as you can.

“I am going to try and stay nice and aggressive. You’re going to need a few putts to go in here and there. So play the par-fives well and a little bit of magic here and there and you never know.”

Power’s third round was one that threatened to have that little bit of magic when he went on a run of four birdies in five holes, starting at the fourth, which took him to four-under thru eight and looking dangerous.

However, his back nine failed to live up to expectation, a birdie at the 13th cancelled out by a bogey at the 12th, and his round was rather frustratingly summed up when his tee shot at the par-three 15th hit the pin but spun back so far that he couldn’t even convert for birdie.

“It felt like it never left the flag. I couldn’t see where it hit the flag but I felt like it was going to be pretty close. But it came back to the front edge unfortunately and I didn’t make the putt. That happens in golf,” he said with a rueful grin.

“It was a beautiful shot and I would’ve been nice if it had gone in, but it wasn’t meant to be.”

On his round as a whole, the Barbasol champion added: “It wasn’t bad. It was a little ropey the first three holes. I missed the first three fairways but from there, I settled down and hit a lot of good shots.

Hovland is the man they’re all chasing, the affable Norwegian finishing off an already spectacular round with back-to-back birdies to take him onto 19-under with a fantastic 62 that saw him open up a two-shot advantage over the chasing pack.

Gooch is his nearest challenger, an eagle and six birdies contributing to a 63 that takes him up to 17-under, while Thomas recorded seven birdies in a 64 to reach 16-under on a day that encouraged low scores.

“That was fun today,” smiled Hovland. “Obviously got off to a nice start and it was nice to have one of those rounds where you can kind of keep it going throughout the day instead of maybe slowing down towards the end there where, frankly, there’s some tough holes.

“I’d say today it was a step above the first two days, but it was still really, really good. I feel like today I still hit a couple bad iron shots, but I was able to get those up and down, and a couple of wedges that I didn’t really hit as close as I should have.

“But the great part is that I managed to par all those times where I didn’t hit great approach shots and when I did hit one in there pretty close, I made the putts, so just scored really well.”

Overnight leader Matthew Wolff has fallen well off the pace, however, after a three-over 74 dropped him back to 10-over and outside the top-10.