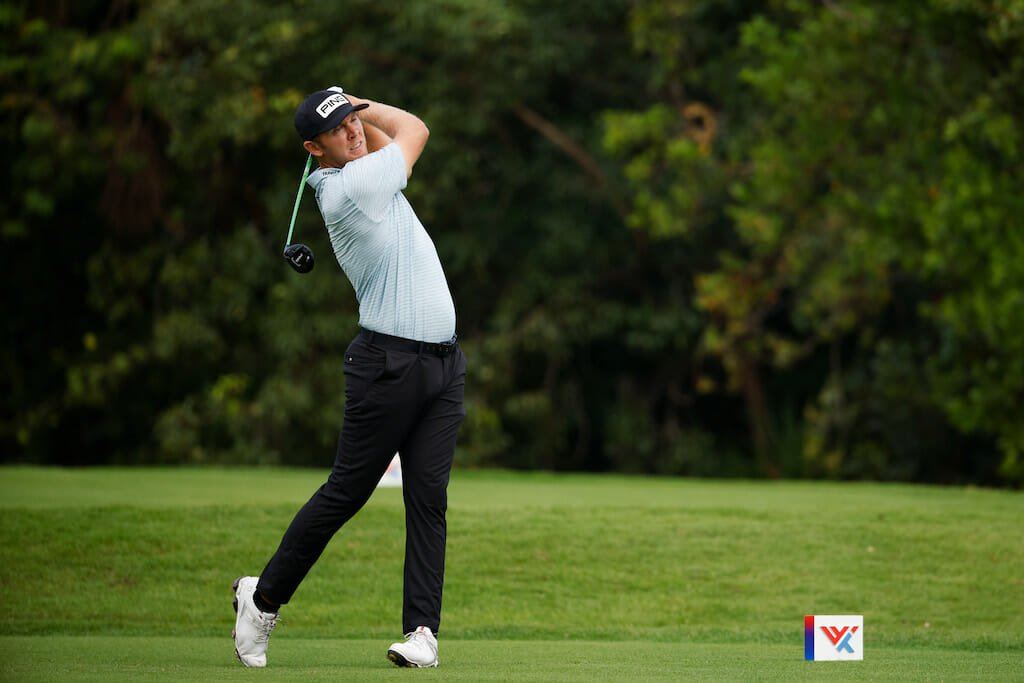 Seamus Power continues to tap into his rich vein of good form, signing for a three-under par 68 to lead the Irish charge on day one of the renamed World Wide Technology Championship of Mayakoba in Mexico.

Power, coming off a share of 12th in last week’s Butterfield Bermuda Championship bashing, capped his round with a hat-trick of birdies from the 13th hole in the €6.5m event being again staged on the El Camaleon course laid out just to the south of Cancun along Mexico’s Caribbean shoreline.

American Matt Wolff, 22, brilliantly set the early clubhouse lead by two shots with a stunning 10-under par 61 in his first event in three weeks since the 22-year old was runner-up in Las Vegas.

Bizarrely, Wolff’s career low came hours after Swiss-born Italian Nino Bertasio went within two shots of matching England’s Ollie Fisher’s 2018 Tour milestone of a score of 59 with an impressive 10-under par 61 on the opening day of the Portugal Masters.

Fellow American-born Aaron Wise was next best in the El Camaleon clubhouse after his eight-under par 63.

Power is no stranger to the Mayakoba resort having made his debut early in the 2016/17 PGA Tour season and in a fourth of 25 events that year when attaining a full main Tour card for a first time in his pro career.

The West Waterford golfer’s best finish was in that first appearance finishing in a share of 28th and while missing the cut in both the following two years, Power has chosen to return even though his two-year exemption in capturing the Barracuda Championship in July means he does not need to be now ‘chasing’ starts in the Tour’s ‘Fall Season’.

In saying that, Power admitted after his round it had been a frustrating round given he had birdied the second hole and then produced 10 straight pars before his three birdies in a row from the 13th.

“It was a bit frustrating there in the front nine. I just couldn’t get the putts to drop but I had a nice little run on the back that made me feel better so overall, it’s not too bad a start,” said Power.

“Today conditions were perfect. We had that rain shower that was nasty for a couple of holes but besides that there was no breeze and it’s the first time I’ve seen this with no breeze. So the course is perfect, the greens are good and the course is in good shape. That overnight rain made conditions a little softer but it was perfect out there this morning.

“My game is not too bad. I played nicely last week in Bermuda and kind of okay in Vegas so it’s coming along. There were a couple of things I wasn’t quite happy with today but I’ll do some work here in the afternoon.

“Besides that, it’s in good shape. It’s been a good summer so hopefully I can just keep it going.”

Shane Lowry had it going albeit to move to three-under par through 15 holes but then proceeded to bogey his closing three holes in a level par 71. Lowry, who is making his Mayakoba debut, had earlier produced three birdies and a pair of bogeys over his opening seven holes before a run of six successive pars.

And former Mayakoba champion Graeme McDowell produced the opposite to Lowry when he birdied three of his closing four holes, his 14th, 16th and 17th, in a round of a one-under par 70.  Though sticking out like a dog’s hind leg is a triple bogey ‘6’ at the par-3 fourth hole that McDowell was playing as his unlucky 13th.