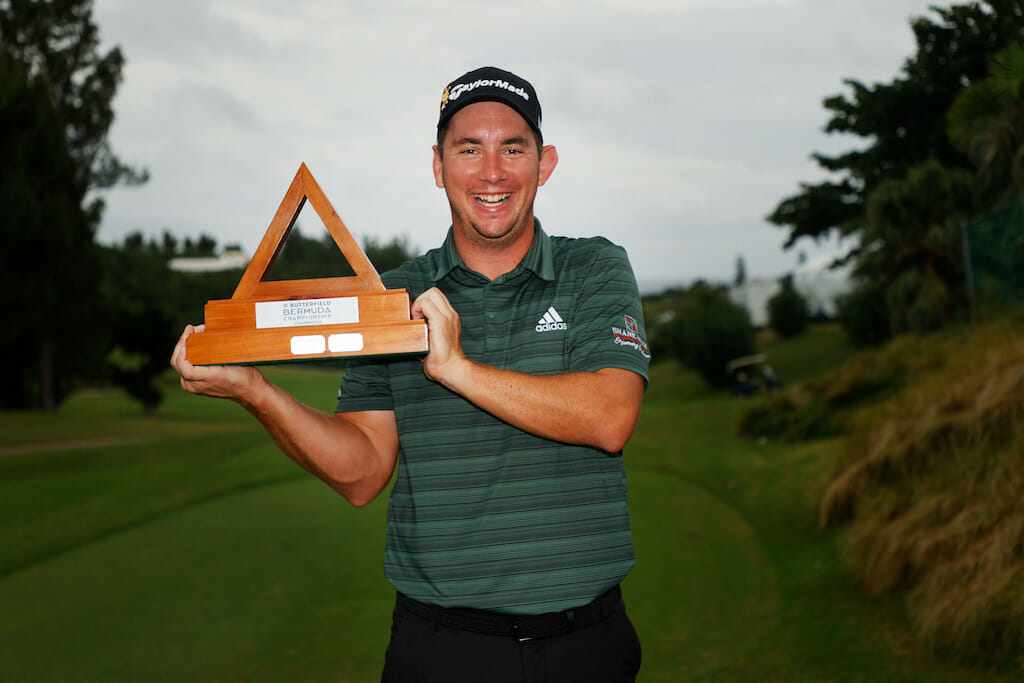 Trailing three shots from the lead heading to the final round, Herbert closed out a third pro career success with a final round 69 to win by a shot at 15-under par. Former Masters champion Patrick Reed had set the clubhouse mark at 14-under thanks to a rousing 65 to eventually finish joint second with Kiwi Danny Lee who signed for a level par 71. Lee’s effort sees him secure full 2021/22 PGA Tour membership given he was playing on a ‘Minor Medical Exemption’.

Herbert, 25, had played in 17 prior PGA Tour affiliated events including this year’s Open Championship by virtue of his wire-to-wire Irish Open win, though he secured full membership rights a few months back in the very first event of the three-tournament Korn Ferry Finals series, and with this week’s event just his third as a fully-fledged PGA Tour.

“I mean, it’s pretty unbelievable. Just so hard out there today and I just, it was one of those ones you couldn’t even let yourself kind of get ahead and think that you’ve won the tournament early because conditions were just so brutal that you could have hit a shot anywhere at any time offline and it was just, it was just good to survive I guess is probably the way to describe it,” he said.

The win earned the Bendigo-born Herbert a $1.17m plus first prize cheque, a two-year Tour exemption to the end of 2023 along with a first invitation into next year’s Masters. However, the new World No. 43,  up 14 places from last week’s ranking of No. 57, is not about to get carried away with the spoils of his latest victory as he explained to me via a dodgy Zoom hook-up soon after his win.

“I don’t even want to try to put expectations on anything right now. Too easy when you win to think you’re never going to not win again. So I think the next few days we’ll sit back and think and celebrate and then, yeah, reset some plans going forward as to what our goals are going to be and how we want to play in some of these awesome tournaments that we’re going to get into.

“I hope that was a sufficient answer, Bernie. Sorry, I couldn’t really hear!”

There also is the question of selection later next year in the Presidents Cup with Lucas set to put himself well-up the standings ahead of the 23rd September start to the event at Quail Hollow in Charlotte.

“Yeah, I think we’ve seen probably three of the guys that have got a good chance of making that team playing out there today, Taylor, myself and Danny,” said Herbert.

“I like to think that we’ve got a good chance assembling a pretty good team. I mean, I would love to be a part of the team, don’t get me wrong, but I feel like there’s a lot of good players that are probably ahead of me at the moment, whether it be in the standings or whether it be in their actual games. We have a very strong team. All the guys like Scotty are playing really nicely and having a good patch in their career, but then we’ve got a lot of younger guys like Joaquin Niemann and Sungjae Im coming through as well that are just bolstering that squad so much.

“I want to think we’re going to be really competitive next year, but I don’t want to say anything that’s going to provoke that U.S. team because they’re also incredibly strong. I would love to be a part of it. I wish I had been a part of the one at Royal Melbourne, that would be amazing. I’d love for it to go back to Royal Melbourne again to get a chance to play in front of our home crowd. Yeah, it’s exciting times and I would love to be a part of that team.”

Of course, Bermuda is famous as the top of the ‘Bermuda Triangle’ and it’s not surprising the trophy is in the shape of a triangle, so I also asked Herbert what he knew about Bermuda ahead of the event

“There’s a sizable triangle that seems to capture a lot of ships and planes, that’s kind of the extent of my knowledge on Bermuda, I think,” he said smiling.

“I’ve been to the Bahamas before and the water here off the ocean was very — it reminded me a lot of that. Yeah, just amazing views, I think. Like you look at that eighth and ninth and 16th and 17th holes here this week, just pretty amazing views off the coast. Stayed at a really nice hotel obviously down there at the Fairmont, got a ferry pretty much every day to the golf course.

“It’s a pretty nice spot to be. If the weather had been a little bit nicer, I think we could have enjoyed it so much more. Just unfortunately we got some pretty blustery conditions this week that probably stopped us from going to the beach or doing anything as fun. It’s still an amazing place and yeah, definitely come back here again”.