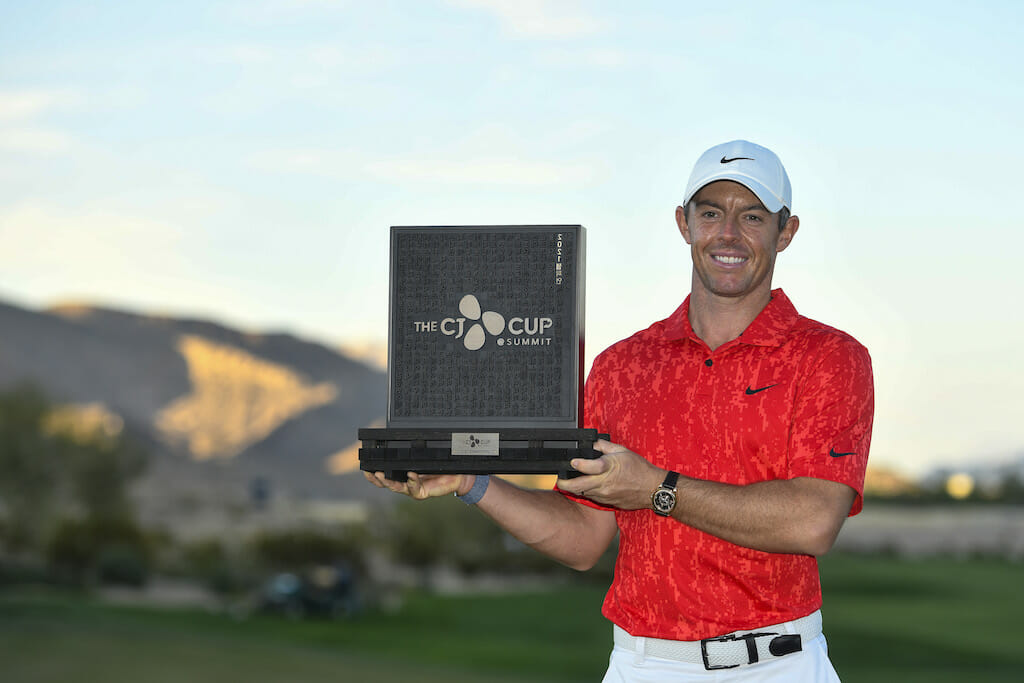 Rory McIlroy spoke on the eve of the CJ Cup that when he was on his game, he was the best player in the world. Four days later he lived-up to that statement in capturing a 20th PGA Tour title with a stunning one-shot success thanks to closing 66 for a record-setting 25-under par total on the host Summit course in Las Vegas.

McIlroy brushed aside third round leader Rickie Fowler and kept Open Champion Collin Morikawa at bay to earn PGA Tour ‘Lifetime’ membership at the start of his 15th season on golf’s biggest stage.

The Irishman set-up a 29th pro career win thanks to a third round 62, his lowest score in two years, and then a closing round capped by a 14th hole eagle and five birdies that also comes sweetly in McIlroy’s first event since the bitter disappointment of losing the Ryder Cup.

It is McIlroy’s second success in 2021 proper after capturing the Wells Fargo Championship in May but his first of the new 2021/22 PGA Tour season and in a second showing in the CJ Cup.

“It’s a big carrot and to get to 20 wins here is a big achievement,” said McIlroy, the 39th player to achieve the feat.  “I didn’t know if it was going to be this week, but I knew if I just kept my head down and kept playing well and kept doing the right things that eventually I’d get there. To get a win, it’s great, it feels really good.”

Fowler, who started the final round with a two-shot lead as he tried to end nearly three years without a victory, saw his quest for success end in taking a sixth hole double-bogey and then fade further with a level par closing nine of 71 to tie for third at 22-under par.

The threat came from Morikawa, a member at The Summit Club, who shot 29 on the front to get in the mix and closed in holing a six-footer for an eagle ‘3’ at the 72nd hole for a 62. It was also Morikawa’s first event since the Ryder Cup.

Morikawa’s run forced McIlroy to play mistake-free after his big eagle putt on the 14th ahead of four closing pars.

“I played really well this week, highlighted by the 10-under yesterday, but to follow that up with a really solid round today,” said McIlroy.

“I just played really solid golf, just kept giving myself birdie looks and thankfully made enough of them to get the job done.”

And it was not lost on McIlroy, who has moved back to No. 8 in the world, the importance of winning in his very first outing since the emotion of Whistling Straits.

“It was huge. It really was. I was really disappointed with how I played,” he said. “There was a lot of reflection in the last couple of weeks. This is what I need to do. I need to play golf. I need to simplify it. I need to just be me. I think for the last few months I was maybe trying to be someone else to try and get better.

“I realised that being me is enough, and being me, I can do things like this.”

McIlroy joined England’s Matthew Fitzpatrick, who captured the Valderrama Masters earlier on Sunday, as European winners just weeks after Europe’s bitter Ryder Cup showing. He takes home a cheque worth $1,755,000 for the effort.

While in more good news for Irish golf, Shane Lowry birdied four of his closing six holes in Las Vegas in an eight-under par 64 to finish in a tie for 54th at 12-under and bank $20,085 for his week’s work.