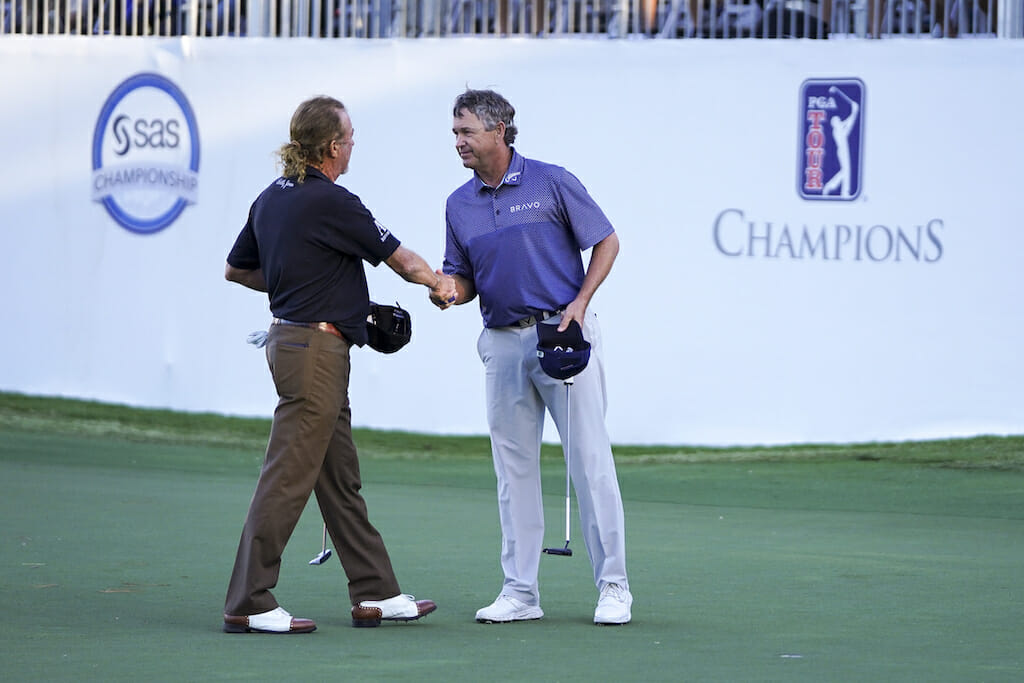 Padraig Harrington’s first over-50’s title will have to wait another day after his final round bid failed to get off the ground at the PGA TOUR Champions’ SAS Championship.

The Dubliner started the day just three strokes back of the lead but was never under-par for his round; trading three bogeys and three birdies in an even par effort for a six-under tally and a share of 18th.

That left him six back of an eventual playoff that saw Lee Janzen drain a 20-foot birdie putt at the first extra hole to deny legendary Spaniard Miguel Angel Jimenez on Sunday.

The 57-year-old Janzen also birdied the par-4 18th in regulation in a closing five-under 67 in the regular-season finale. The two-time U.S. Open champion won the 2015 ACE Group Classic for his only other Champions title.

“Crazy. I just need to get through this so I can have a moment to myself soon,” said an emotional Janzen.

“You know, when you get in the heat of a tournament, it’s emotional. Everything gets amped up. If you’re a machine like Langer, then these things don’t bother you.”

With six years between titles, Janzen was asked if he saw this one coming

“Every week I think, you know, things could turn around, it’s just momentum,” he said.

“It was really the middle of the first round that changed where I had six birdies in seven holes. Even though I hit the ball in the trees and made a double and missed a short putt, 67’s a really good score to start with. I just thought to myself if I shoot 67 every day for the rest of my life, it’s going to all work out.”

The top-72 players in the Charles Schwab Cup Standings list now advance to the playoffs with Darren Clarke flying the flag for Ireland from ninth place and Janzen up 22 spots to 37th on the standings.