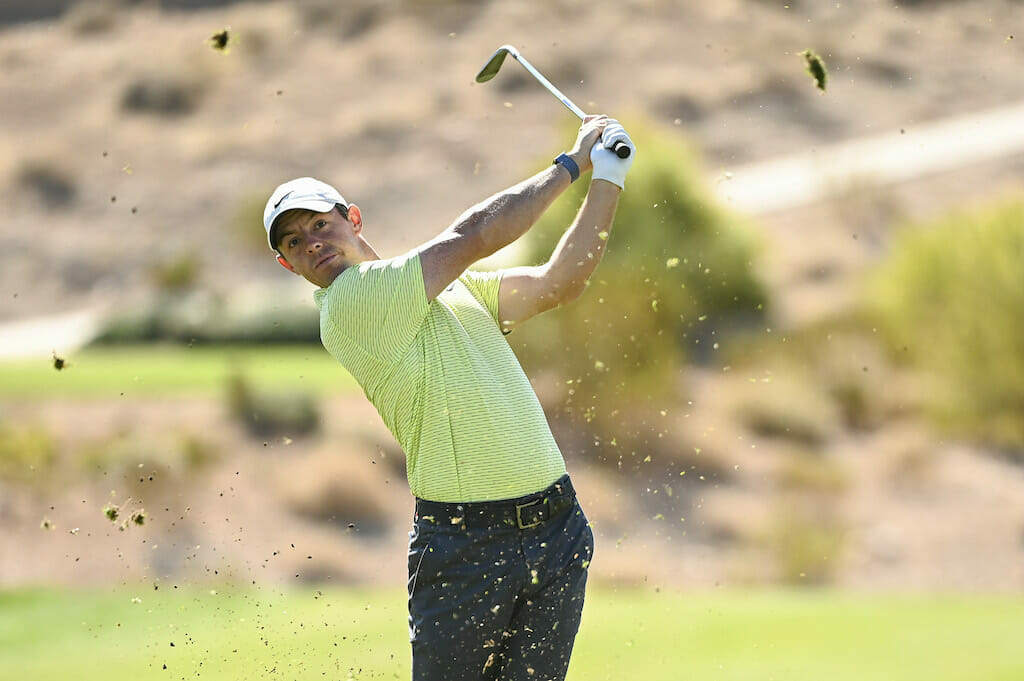 Rory McIlroy signed off with a brilliant eagle for a best of the day 10-under par round of 62 that saw him soar 17 places up the leaderboard and into outright second at 19-under, two shots behind a resurgent Rickie Fowler at the CJ CUP.

McIlroy picked up six front nine birdies in seven holes from the third to tie his career-best front nine score of 30 having last posted the number at the WGC-FedEx St. Jude this year. He added two more birdies at 12 and 14 before a brilliant 352-yard drive down the last set up an iron into twenty feet for his closing eagle in a highly encouraging bogey-free effort.

McIlroy leads the field in Strokes Gained: Putting (6.842); the only time he’s led the category for an event on Tour was the 2018 Arnold Palmer Invitational where he won, outperforming the field by 10.03 strokes on the greens that week. No wonder then that McIlroy is feeling excited about what he’s seeing ahead of tonight’s final round.

“It’s an exciting day for me,” he said. “I’m working on a few things in my game not necessarily swing related, but more mental stuff, routine, visualisation, things that I’ve done pretty well this week for three days, but it’s exciting to try to do those things when you’re under a little more pressure tomorrow and you’re trying to win a golf tournament. So I’m excited to see how that goes.”

“I mean the big thing is I’ve played the last two days keeping it in the short stuff and I haven’t made any bogeys. That’s huge. I said to Harry yesterday, I can’t remember the last time I played a round of golf without a bogey and now I’ve played two rounds in a row, so that’s nice to see.”

McIlroy will renew old rivalries, staring down Rickie Fowler in the final group after the American finally came good after a horrid spell on Tour. Taking full advantage of a sponsor’s exemption, Fowler posted nine birdies in his bogey-free 63 to reach 21-under par, a 54-hole tournament record-low putting Fowler within touching distance of a sixth PGA Tour win.

“I’ve done everything I really wanted to do the first three days,” said Fowler, who hit all 18 greens in regulation for just the third time in his career on Saturday.

“It’s nice to be executing the way we are. I say “we,” it’s a two-man show out there, Joe [caddie] and myself, and ultimately I’m the one pulling the trigger.

“No, it’s just been a long time coming. I haven’t been in this position a whole lot in the last couple years, so to feel the emotions again on the back nine being around and then in the lead, you know, kind of dealing with that again and kind of making sure that I was going through the right process and committing to what I was ultimately trying to do, it was great to see that I was still executing and hitting the shots that I wanted to.

“So, no, just a solid round of golf today. Started with two solid rounds the first two days, so yeah, three days are done. I can’t do anything about that. So 18 holes of golf tomorrow and a whole new day.”