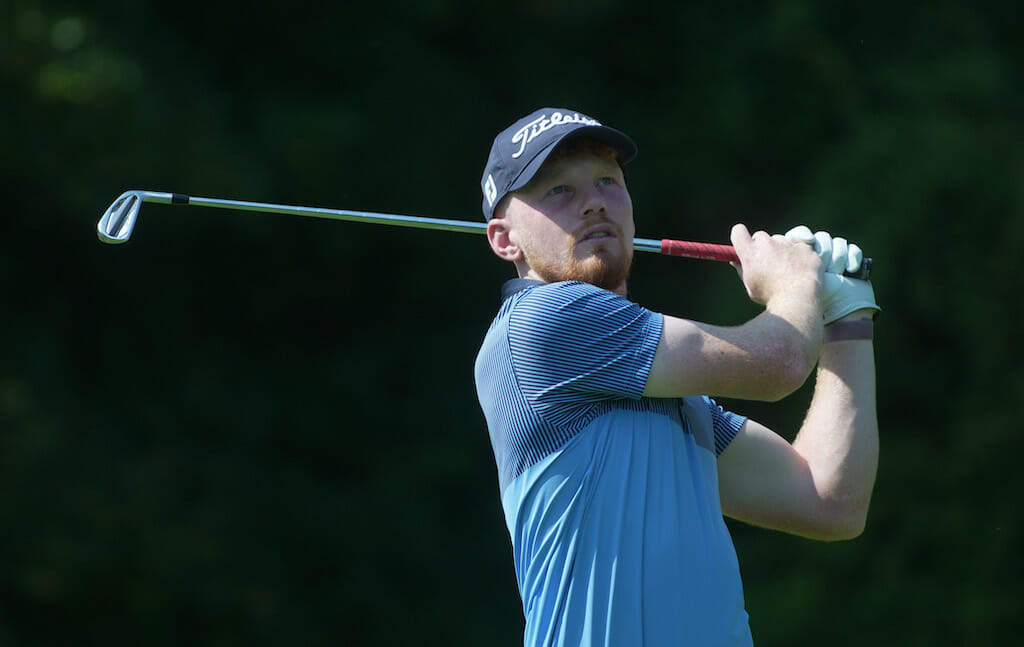 John Murphy’s recent form translated perfectly from the European Tour back to the Challenge Tour as he opened his Empordà Challenge bid by positioning himself two shots off the lead after the opening round in Girona.

The Kinsale man, who recorded a top-10 finish at the Alfred Dunhill Links Championship and then made the cut at last week’s Open de España, found seven birdies in a four-under-par first round 67 at Empordà Golf to lie a couple of shots adrift on a packed leaderboard.

Five players lead the way after day one at six-under following a low-scoring day in Spain, with another 11 players one shot back at five-under, meaning Murphy, despite being just two off the lead, is only in tied-17th.

Meanwhile, a closing eagle fired Michael Hoey back up the leaderboard in Girona as he battled back from a shaky middle third of his round to shoot a two-under 69, good for an early tie of 35th.

Given how late it is in the Challenge Tour season, Murphy would likely need a few top-five finishes – and possibly a win – to put himself in the picture for promotion to the European Tour next year, but he’s started the right way with this opening display.

Starting at the 10th, the 23-year-old racked up birdies at the 12th, 14th, 15th and 17th at Empordà to hit four-under at the turn, but he ran into difficulties at the first which led to a bogey, and a double-bogey followed at the par-three sixth.

But that had been preceded by a birdie on the third, and birdies at the eighth and ninth to close his opening round will give him a spring in his step going into his second round as he looks to maintain his fine momentum and chase down the leaders.

Elsewhere, Hoey has realistic designs on a top-20 place which would earn him automatic promotion to the European Tour next season, currently sitting 33rd, and he had started well with three birdies on his front nine but gave it all away with two bogeys and a double in his first three holes of the back nine.

But a birdie at 14 got the 42-year-old back to level-par, and he finished with a flourish with a three at the par-five 18th to sign for a 69 that has him four back of five players at the top.

Those five players are Scotland’s Craig Howie, South African duo Jacques Blaauw and JC Ritchie and the French pairing of Julien Brun and Ugo Coussaud, the quintet all returning rounds of 65 to hold a one-shot advantage at six-under.

Brun won the Open de Bretagne earlier this year and is looking to nail down his fifth-placed ranking in the Race to Mallorca, admitting that some mental adjustments he made earlier in the year have paid off for him.

“I have played better, and I have made a lot of changes,” said the Frenchman. “I’ve got a new coach and I’ve surrounded myself with new people as well and I have worked mentally and physically a bit differently.

“I moved to Prague as well two years ago and when you add it all up it’s a lot of changes.”

Meanwhile, Howie is another who could cement himself inside that top-20 if he can produce a good finish this week, which would take the pressure off him going into the Tour Championship in Mallorca.

“I’d love to go to Mallorca and have absolutely no worries. To be able to go there and relax and just enjoy the week, but this is golf. These things very rarely go in your favour and I’m trying not to think about it,” said Howie, who is 16th in the Order of Merit.

“I think if I play good golf the points will kind of take care of themselves. I think it’s more about trying not to think about it rather than trying to figure out what I’m actually doing.”