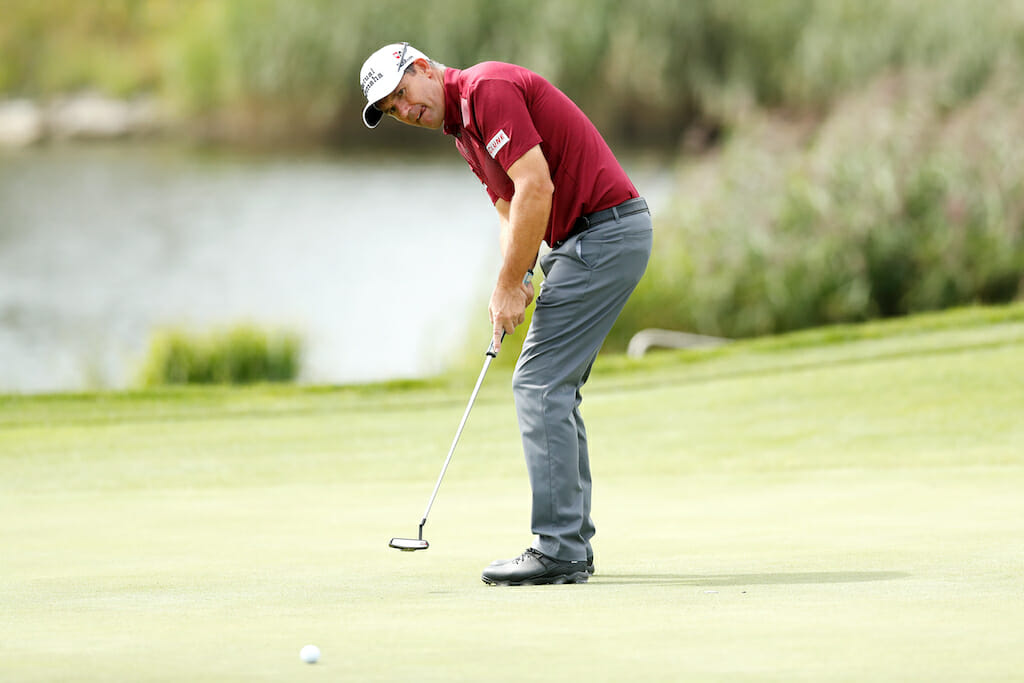 Darren Clarke and Padraig Harrington went the wrong way on the leaderboard in the second round of the Constellation Furyk & Friends in Jacksonville, Florida on a tough day for the Irishmen.

Near the top of the leaderboard, Clarke endured a rough day that ended with a double-bogey, seeing him card a one-over 73 and slip outside the top-20 at three-under for the week, eight back of leader Phil Mickelson at Timuquana Country Club.

Meanwhile, Harrington’s PGA Tour Champions debut is not going the way he would have hoped, the European Ryder Cup captain adding a three-over 75 to his second round 74 to drop back to 63rd in an 80-man field at five-over.

Clarke had been in the mix, just two strokes back of Mickelson – who had led after the first round too – after the opening round, but he never got going on Saturday as he couldn’t keep the mistakes off the scorecard.

The former Open champion had started strongly with two birdies in his first three holes, but a bogey at the fourth was his only other notable score on the front nine, before he then cancelled out a bogey at 14 with a birdie at 15 prior to taking a six at the par-four 18th to slip back.

As for Harrington, his PGA Tour Champions bow will not be one he will remember in a hurry as five bogeys and two bogeys led to a frustrating 75 in Florida that has him well off the pace going into the final day.

A bogey on his opening hole set the tone and, although he responded with a birdie at the third, a bogey at the eighth had him over-par at the turn. The Irishman did get under-par briefly with a birdie on 13, but bogeys to close at the 15th, 17th and 18th capped another tough day.

At the top, Mickelson turned in a five-under 67 in his second round and will take a two-shot lead over Miguel Angel Jiménez, Steve Flesch and Matt Gogel into the final day at Timuquana as he goes in search of a third PGA Tour Champions victory.

After one birdie on the front nine, the US PGA champion came to life on the back nine, headlined by an eagle at the par-five 13th and complemented by birdies on 10, 14 and 15 to give him a little bit of a buffer to the chasing pack.

“I felt like I was hitting some good shots on the front nine but they weren’t quite going the right distance or just weren’t quite working out, and then the back, when I made that eagle putt, I went on a nice little tear, birdieing the next two,” said Mickelson, who also had a bogey on the 16th.

“I had a lot of fun. And I hit some good shots. With the exception of that one bad tee shot on 16 that led to a bogey, I drove it pretty well, and that allowed me to play much more aggressively on the course.

“(The rest of the field) are playing some good golf, so I have to keep doing the same thing and playing aggressive, driving the ball in play, and hit some good iron shots and give myself some putts and hopefully make some.”

Jiménez had the best round of the day, a bogey-free seven-under 65, to bring himself into contention alongside Flesch, who notched seven birdies in a 66 that ended with a bogey, and first round overnight leader Gogel, who will be disappointed by comparison following a second round 69.