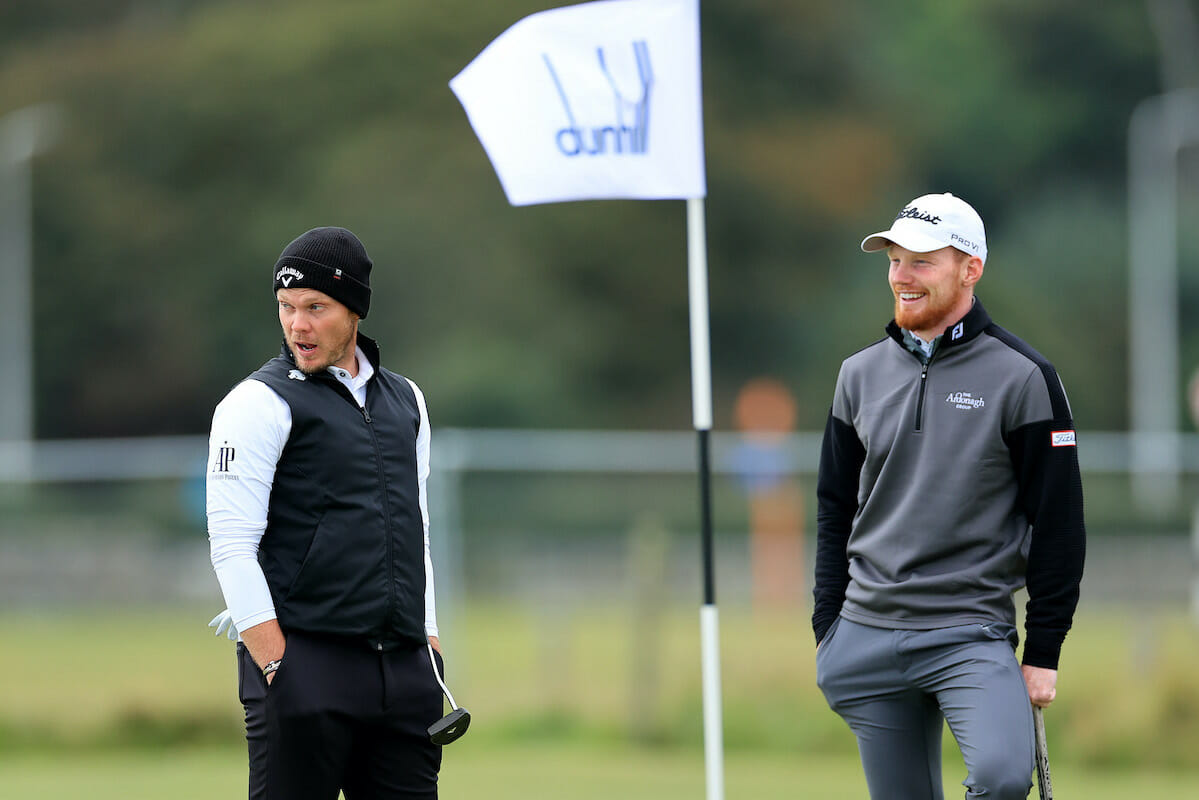 Danny Willett of England waits to putt on the third hole with his playing partner John Murphy of Ireland (R) during the final round of The Alfred Dunhill Links Championship on The Old Course on October 03, 2021 in St Andrews, Scotland. (Photo by David Cannon/Getty Images)

Winning birthday boy Danny Willett was singing the praise of Cork’s John Murphy after the Englishman captured the 20th anniversary Alfred Dunhill Links Championship at St. Andrews. In a possible St. Andrews first, the crowd gathered around the final green singing ‘Happy Birthday’ to the now 34-year-old Willett who posted a final round 68 to win by two shots at 18-under-par.

It is Willett’s first taste of success in just over two-years and comes on the back of a number of health issues this season that derailed any hope of qualifying for the European Ryder Cup team. “Hearing everyone sing ‘Happy Birthday’ was great and that has to be a first on the Old Course”, said Willett. “It’s just great to win again because it has been a very unfortunate last eight months, really. Every time the game feels like it’s been in a nice place, we’ve had a couple of things, issues with health, just things that you can’t really avoid.

“We’ve had COVID, wisdom teeth problems, appendix issues, they’re not things that — they are just things, and they seem to have knocked us back a peg or two, and never really been able to get the momentum going in”.

Murphy, 23, partnered Willett over the final round having headed into the last day locked in a four-way share of second that included Shane Lowry, and with the Kinsale Golf Club attached flame-haired Murphy equitting himself superbly in posting a 71 to share ninth place at 12-under par.

After missing the halfway cut in only two prior European Tour events since turning pro in June, Murphy earned a whopping Euro 81,543 prize cheque to take him straight to 197th on the Race to Dubai money list.

“John played good and was playing lovely”, said Willett. “He made a couple of silly errors, and nine killed him, like really killed his momentum that he had going. It was just an unfortunate one, kind of rolled in the wind a little bit and had to take a drop.

“There was again a silly error on 16, but John played a nice up-and-down on the last for birdie to finish top 10 that gets him into next week. “Though this is kind of what you want to do when you’re first starting out. These top-10s are massive, not only for the money, but for the opportunity to play the week after when you’re clearly playing some good golf. We’ll see how it goes next week and wish John well”.

Murphy’s effort at the Home of Golf comes three-years after the then amateur Murphy captured the prestigious St. Andrews Links Trophy. “I would have preferred it if it was me again walking up the 18th as the winner for a second time, but, no, it was a cool experience”, said Murphy. “I knew a lot of people around that 18th green. It was lovely to have some local support out there today.

“As I said, I would have loved to have been in contention coming down that stretch, because that’s why I practice, why I play golf, to put myself in those situations. “So, I’m pretty happy with how I got the most out of the last few holes. Got up-and-down on 17 and 18 to come top ten, so that was a positive take”.

Shane Lowry, and with a closing bogey-free 68, shared fourth place at 15-under par and three adfit of Willett with the Clara golfer’s last round producing three birdies in his opening six holes but just one over the next dozen, and that being at the last. “I’m happy with the result but I do feel like I left it all out there today but then a top-five coming off of last week is my best finish for a while,” said Lowry. “My golf has been good. You need to finish with a better score around here to get the job done today. It is what it is. “I’m a bit disappointed, but I’m really happy with how I played this week and how I handled myself after last week”.

Lowry will have a week off ahead of returning to the PGA Tour for the October 14th CJ Cup in Las Vegas. “I’ll be on the couch for the next few days and looking forward to it”, said Lowry.