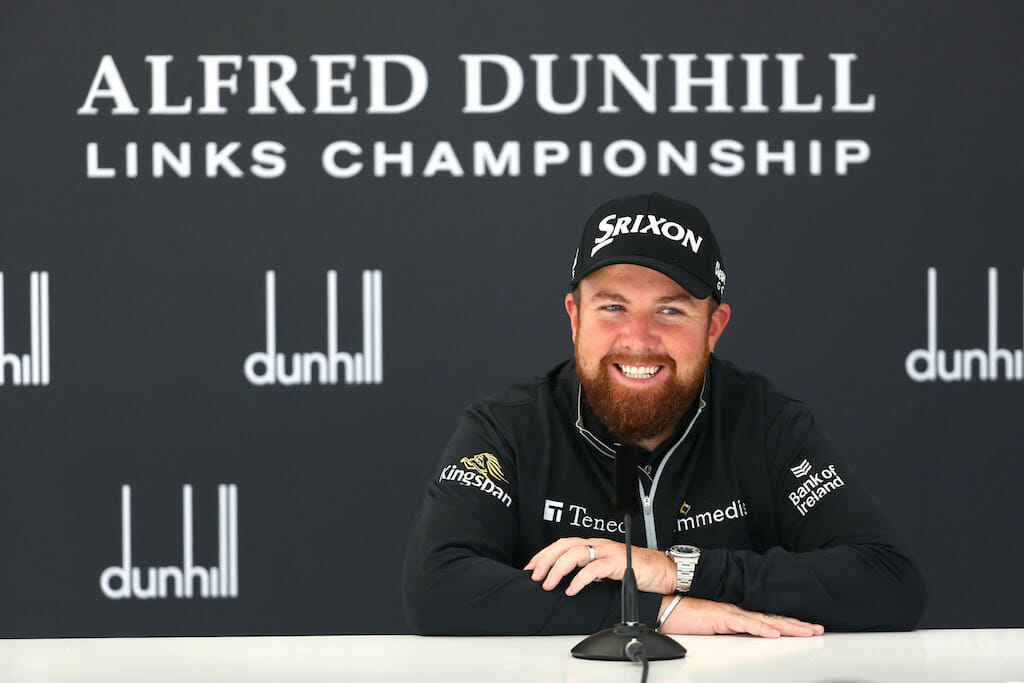 Shane Lowry returns to action at Carnoustie this morning for the Alfred Dunhill Links Championship, and the 2019 Open Champion will be hoping to bring the kind of links form which has yielded two of his biggest career victories as he takes in three of Scotland’s most celebrated coastal venues.

The Irishman claimed his maiden Major title at Royal Portrush more than two years ago and also won the Irish Open as an amateur on a links course, County Louth Golf Club, in 2009.

He is joined this week by two of his fellow European Ryder Cup team members – Tommy Fleetwood and Tyrrell Hatton – as they tee it up at regular Open Championship venue Carnoustie Golf Links in round one, followed by the spectacular Kingsbarns Golf Links in round two and then play the iconic Old Course St Andrews, which hosts the final two rounds of the Pro-Am format event.

“But the reason I’m here this year is to come here and play with Gerry (McManus) and have a good time,” said Lowry. “My dad and his friends always come over. It’s a week that I do love and I love playing here and love. And look, playing golf at St Andrews is pretty cool, especially on days like today where it’s nice and sunny.

“So obviously it’s going to be a little bit of a comedown from last week. Be interesting to see how it goes. But look, I’ll just go out play my best and see what happens.”

The trio are joined by three-time Major winner Pádraig Harrington, who goes from captain to competitor after leading the European side at Whistling Straits last week. The 50-year-old’s first of his back-to-back Open Championship victories came at Carnoustie in 2007.

Victor Perez defends this week having held the title of reigning Alfred Dunhill Links Champion for two years, the Frenchman earning his maiden win here by a one-stroke margin in 2019, while Billy Horschel makes his debut in the event having given his chances of winning the Race to Dubai a huge boost by winning the BMW PGA Championship, the third Rolex Series event of the 2021 season, less than three weeks ago.

“My game was in good shape a few weeks ago,” said Horschel. “It’s still in pretty good shape. I’m not nearly as sharp as I was in Wentworth. Home for two weeks. Didn’t do anything for about, seven, eight days at home. Just spent time relaxing coming off four weeks in a row, four big weeks in a row, and then picked up the clubs middle of last week and started practicing.

“So the game is not far off but there may be a few loose shots here and there. And then at the same time with the conditions that it looks like we’re going to have, it’s going to come down to some bounces and some luck here and there a little bit. But I’m still feeling very confident with my game is right now and we’ll see what happens, and hopefully I’ll have a chance to win this title come Sunday.”

Robert MacIntyre, Scotland’s highest-ranked golfer, leads the home charge this week having registered a top ten finish at The 2021 Open Championship at Royal St George’s in July, his last appearance on a links course

“I’ve not really reset goals. That’s one thing I’ll do at the end of the year. This year I’m just trying to build on what I started the year on. I started really well, and the last eight weeks, I feel like I’ve just kind of plateaued out. Obviously missed a few cuts. But at the end of the day, if I go out here this week and I put on a good performance, them three missed cuts, no one’s talking about them. For me, I’m not really thinking about them, or I’m not thinking about them at all. I’m out here this week to try and win a golf tournament.”