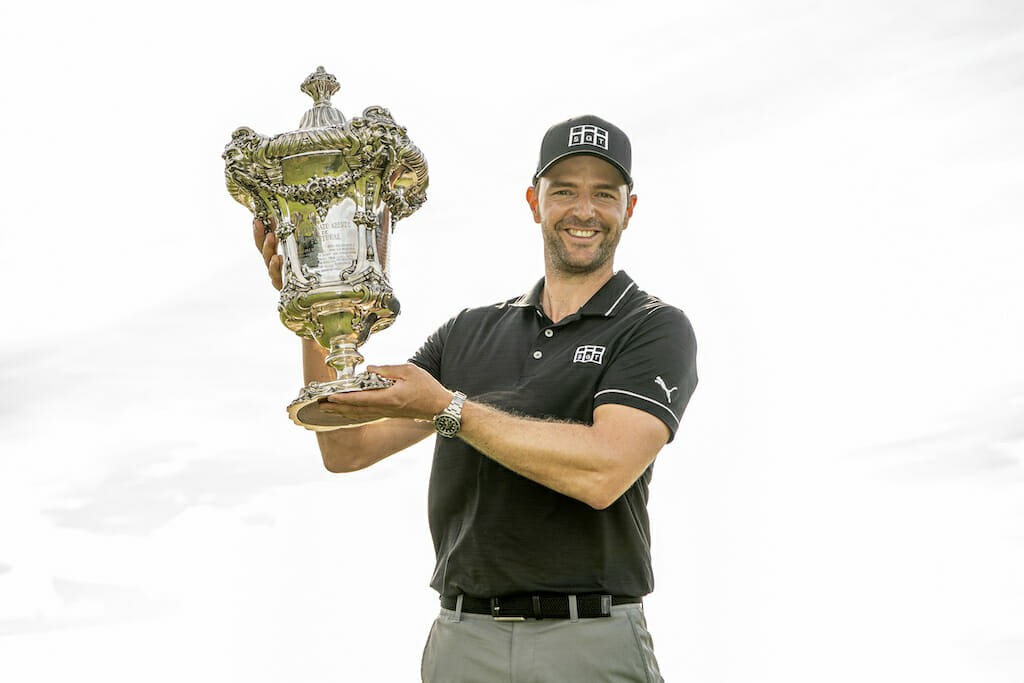 Michael Hoey carded consecutive rounds of 71 over the weekend for a top-25 finish as Marcel Schneider holed a 30-foot eagle putt on the 72nd hole to seal a one-stroke victory and his second title of the 2021 Road to Mallorca at the Open de Portugal at Royal Óbidos.

Hoey traded five birdies and four bogeys in a one-under closing effort, seeing him drop 11 places down the leaderboard to a tie for 23rd at eight-under par. That leaves the five-time European Tour winner in 31st on the Road to Mallorca standings after banking €1,860 for his week’s work, though Hoey would’ve been hoping for more having played himself into contention at the halfway stage.

In the end he finished 11 shots back of a worthy winner in Schneider. The German was left needing a birdie on the par five final hole to force a play-off with Frenchman Frederic Lacroix, who had set the clubhouse lead at 18 under par following a sublime seven under par round of 65, however Schneider’s eagle meant he went one better, signing for a two under par round of 70 to climb to 19 under par and top the leaderboard at Royal Óbidos Spa and Golf Resort.

The 31-year-old showed real bravery to bounce back from a double bogey on the par five second hole to secure an enthralling victory and convert a 54-hole lead for the third time in his European Challenge Tour career.

“I’m still pumped. I’m still out of words, it means a lot, for sure,” he said. “When the ball dropped I just thought ‘come on, that’s it’. I waited for it the whole day.

“I made a huge mistake on the second hole and del Rey started birdie-birdie so that took the momentum off me. I told myself to hang in there, hit good shots onto the greens, stay patient on the greens but the putts just didn’t want to fall in. I had to stay patient until the last putt and I knew at the end that it was a super important one and I did it.”

Schneider had focussed his efforts on the European Tour earlier in the year after finishing in the top five on the Road to Mallorca Rankings in 2020, however a victory in the Kaskáda Golf Challenge in July changed his outlook on the season.

“My main focus at the start of the season was on the European Tour but I didn’t do that well,” he said.

“I missed three tournaments because I was not able to play so I went to Czech because I knew the place and I always played well there. I just wanted a one-week experience on the Challenge Tour but I won it, so the whole schedule changed again.

Lacroix’s second place was enough to move him inside the top 20 on the Road to Mallorca Rankings, while 23-year-old Alejandro del Rey, of Spain, finished three shots further back in third place on 15 under par to secure a career-best finish. Sweden’s Jens Dantorp finished in a tie for fourth place on 13 under par alongside Ricardo Gouveia, who was the highest placed Portuguese.

England’s Todd Clements, New Zealand’s Daniel Hillier and Austria’s Lukas Nemecz finished in a tie for sixth place on 12 under par, with Kristian Krogh Johannessen a shot further back in ninth place.

Schneider’s victory, his second of the season after his triumph in the Czech Republic, moves him up 12 places to tenth on the Road to Mallorca Rankings, which are still led by Spain’s Santiago Tarrio. Gouveia strengthened his grip on second place in the Rankings following his tie for fourth, while Spain’s del Rey was the biggest mover of the week, jumping 34 places to 60th.

The next stop on the Road to Mallorca is the Swiss Challenge, which takes place at Golf Saint Apollinaire from September 30 – October 3, 2021.