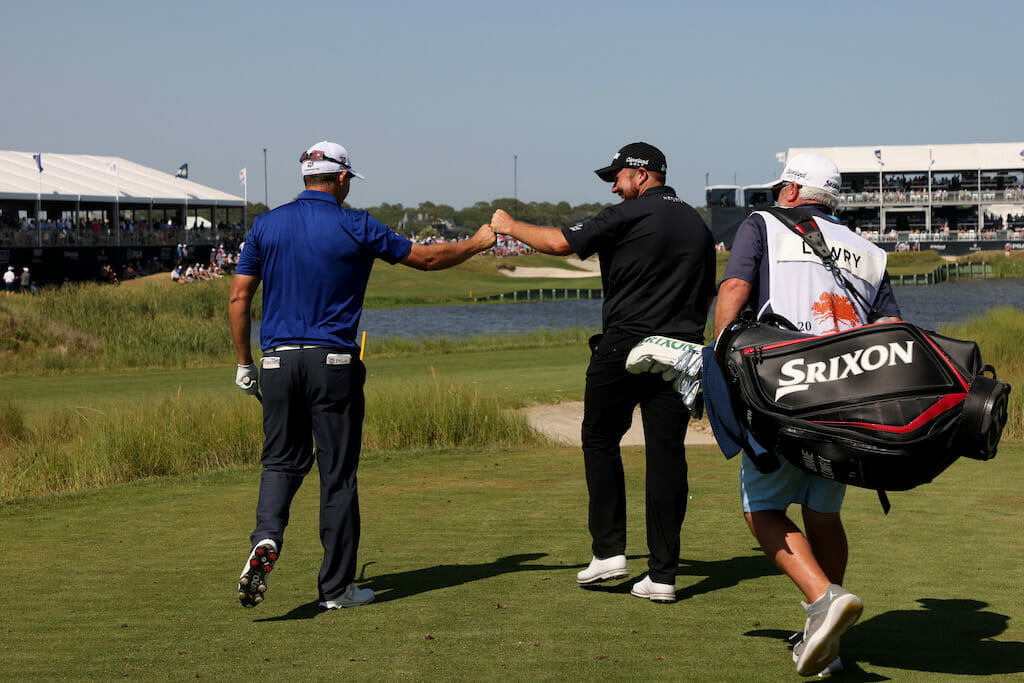 It would never be a good thing in anyone’s life when a pupil gets called into the Principal’s Office. Such a call would likely lead to a suspension or a worse-case scenario of expulsion from the school, college or whatever.

Shane Lowry remarked he got called into the Principal’s Office but instead of being handed bad news, the Principal Padraig Harrington found himself embracing the pupil or in this scenario his fellow Irishman and European Ryder Cup debutant:

“I was called into the Principal’s office and he just gave me a hug and said congrats,” Lowry smiled. “We had a little conversation and it was obviously very special. Very special moment to have my dad here – I’ve got a great picture of the two of us when we both found out so that’s pretty cool to have.”

And for Harrington it was one of what he described as the ‘better parts of the job’ of advising Lowry, along with Sergio Garcia and Ian Poulter, that they will be joining his team heading to Whistling Straits.

“Calling for Shane to meet with me was really one of the better parts of the job,” said Harrington smiling.

“I’ve been around Shane the last two and a half years and it’s the elephant in the room, no doubt about it. Everybody was saying, you’re going to pick Shane, you’re going to pick Shane, and if anything, that pushed it away from me. I’m terrible like that. I was making sure I kept on doing this; it actually made it harder for Shane to get in the team.

“I’m thrilled with the way he handled the pressure throughout this year. His consistency, his form has been tremendous. He really pushed on during the latter half of the season.   You know, it was great sitting down with the vice captains, and it was one of those picks, as well, I had to keep checking with the vice captains.

“I’m not biased here. I’m not like, you know, this is that — this is right. Don’t let me be distracted here because Shane is my friend. It was with the support of the vice captains that I was able to give him the nod and I was thrilled with that.

“I believe he’s going to do a good job. He brings great passion. He fits very well into the team and it’s great to have a few rookies in the team.”

Though there’s always a downside to being the captain of the team and that’s having to advise those that missed out on selection.

“Absolutely,” said Harrington. “You know, obviously most people will think of J.R. (Justin Rose) and it was difficult to have to ring him. He played well enough to be on the team. He pushed hard at the end but there wasn’t a spot ultimately.

“Alex Noren played great. Stats-wise, Alex Noren was right there. Fantastically suited to the golf course. So, I don’t know if Alex knows how close he was to making the team.  Really quality player.

“But it was tough ringing Justin, because that was the one right in the bubble. Clearly, he’s good enough to be in The Ryder Cup. He’s a great player showing some form right now.  That eagle on the last, what a way to finish; the drama of it.

“Thus, yeah, could we have a couple more weeks – it’s tough. I certainly had my heart set on Ian and Sergio being the hearts of the team, the soul of a Ryder Cup Team. They have shown it and proved it in the past. Both of them are in great form. We see the stats.

“I think Ian is having the best ball-striking of his whole career and he’s in great form.  Sergio, again, statistically, very good. Loves the Ryder Cup, the passion of it, great in match-play. I couldn’t have done without those two guys.

“That ultimately means that you know, you’re skiing down to the last spot. Bernd Weisberger, he delivered. He turned out. He played his way into the team under pressure this week. Again, fabulous ball-striker but delivering under the pressure that he must have been under this week was fantastic. Exactly what a captain wants to see, and it ultimately left no spot.

“That’s the way it is. If you don’t play your way in, it’s a tough position to be in, and while J.R. and Alex certainly were very strong on the radar, both very capable of being members of this Ryder Cup Team, it just didn’t fall in their favour this time around.”