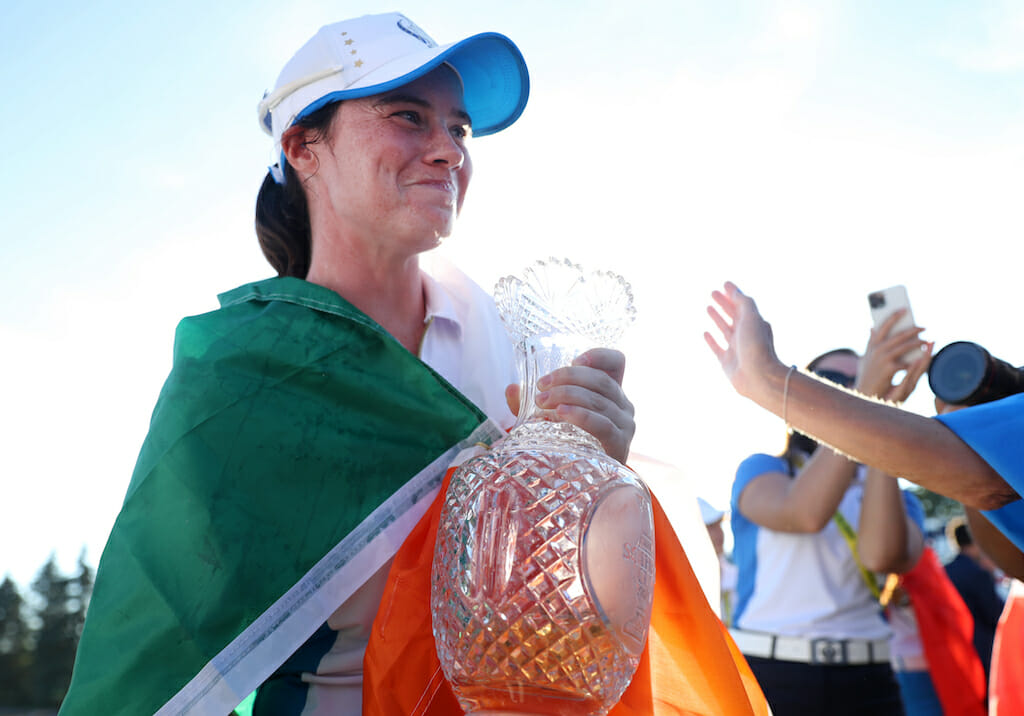 Solheim Cup hero Leona Maguire returned home having written her name into European team history as the leading European points-scorer ever in a single Solheim Cup.

In her maiden Solheim Cup, the undefeated Maguire is now the highest European points scorer in any Europe side in the 31-year history of the competition after amassing 4½ points following Europe’s stunning 15-13 triumph of the US in Ohio.

The Slieve Russell attached pro’s effort is a half-a-point more than Frenchwoman Celine Boutier’s previous European team best of four points in the 2019 Solheim Cup at Gleneagles. Maguire, watched by twin sister Lisa, had earned Europe’s first point in the singles taking down American rival Jennifer Kupcho 5&4 and then both Maguire’s were on hand to cheer on Finland’s Matilda Castren who holed her birdie putt to give Europe a 15-13 triumph in Toledo.

It is only the second time in the 31-year history of the event that Europe had won back-to-back with Catriona Matthew the first captain to lead Europe to successive wins.

Matthew, who is stepping down as captain, was asked ahead of the victory celebrations if she felt Maguire was worthy of the ‘Woman of the Match’ award:

“I think she certainly qualifies, but this team is always one team and we win as a team or we lose as a team,” said Matthew. “It’s tough to pick out individuals. I think they all played fantastically well, so we’re all one team.”

Maguire, proudly wrapped in the Irish flag and along with her sister Lisa who was part of Matthew’s back-room team, then celebrated into the wee hours of Tuesday morning (US time).

“It’s been an incredible week,” Leona said. “It’s a dream come true to be here to go and win a Solheim Cup on American soil, you can’t even imagine. We had a phenomenal team this week from top to bottom and this is an experience I will probably never forget

“Never in my wildest dreams did I think the week was going to go this way.  It’s been an honour to represent Europe and the trust that Beany and all the vice-captains had in me was incredible. It’s given me a massive confidence boost and I wouldn’t have been able to do it without them.”

And Lisa, decked-out in the European Team uniform, shared her emotions and praise of her sister.

And there was a side of Maguire rarely seen before in the heat of competition and that was producing fist pump after fist pump, as Lisa witnessed.

Maguire is taking this week off back home in Co. Cavan and is expected to head back to the States for the September 16th start to the Cambia Portland Classic in Oregon.