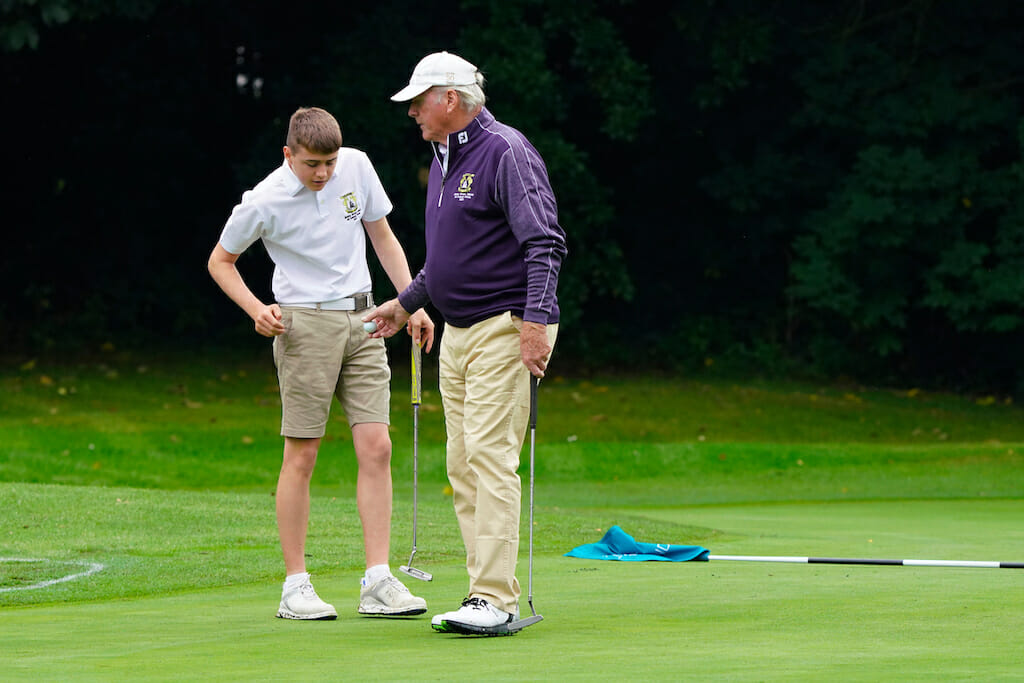 Two weeks of jam-packed golf began on Tuesday as the AIG Cups and Shields All-Ireland Final series kicked off in Shandon Park. Forty-eight teams will compete in six events this week as the Men’s and Women’s Inter-Club season reaches its culmination.

First to tee off was the quarter finals of the AIG Jimmy Bruen Shield where the format is foursomes matchplay. Strabane, Co. Cavan, Tramore and Gowran Park move through to Wednesday’s semi-final matches while it was the end of the road for Dundalk, Beech Park, Carrick-on-Shannon and Berehaven.

Playing their part significantly in Tramore’s 3-2 win over Carrick-on-Shannon was the grandad – grandson pairing of John O’Brien and James Patrick (JP) O’Brien who fought back from being 2 down with 4 to play to win on the 18th.

“This man [JP] hit a brilliant shot to 3-feet in the end to win it for us,” beamed Grandad John. “We played steady more than great, but we hung in there. It’s about keeping going, you never give up. For a long time we looked in trouble but we never gave up.”

“Class” is how JP describes having played a summer of competitive golf with his grandad, who is over 60-years his elder:

“A small bit of experience helps,” replied John with a smile.

In the AIG Women’s Minor Cup Ashbourne, Powerscourt, East Cork and The Heath will compete in Wednesday’s semi-final matches as they overcame Royal Portrush, Belvoir Park, Gort and Castlegregory respectively.

To be eligible to compete in the AIG Minor Cup, players must not have had a Handicap Index lower than 21.0 on 1st January 2021. The Powerscourt team looked strong with Jeanette Lowe and Stella Carmody both winning their matches 4&3 before Alison Notley finished with a 6&4 advantage in the last match to secure a 4-1 victory for the Leinster South Champions.

On the opposite side of the draw, the Heath won by the same margin as Helen Bergin, Mary McNamara and Anne Doolan won their matches with the final two called-in and declared halves.

Wednesday will see the semi-finals of the AIG Jimmy Bruen and AIG Minor Cup completed in addition to the AIG Challenge Cup quarter-final matches.