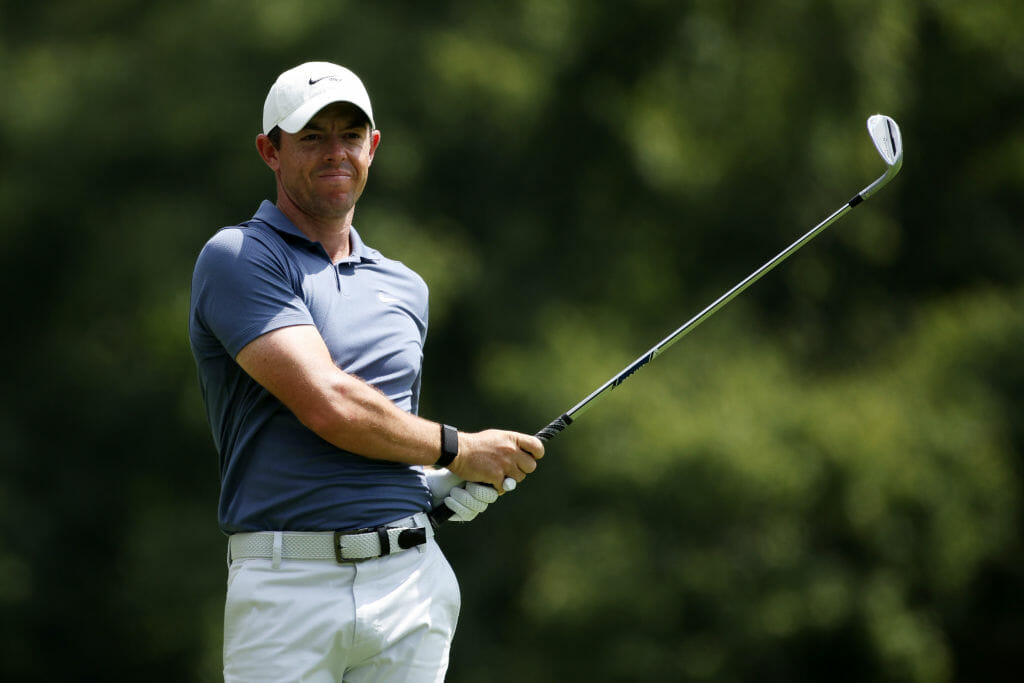 Rory McIlroy plays his shot from the fifth tee during the final round of the TOUR Championship at East Lake Golf Club on September 05, 2021 in Atlanta, Georgia. (Photo by Kevin C. Cox/Getty Images)

Rory McIlroy ended his PGA Tour year declaring his game is still a ‘work in progress’ ahead of a fortnight’s break leading into joining his European team-mates in the September 24th starting Ryder Cup in Wisconsin.

McIlroy was already winging his way back to Florida after a closing 67 as Patrick Cantlay claimed the PGA Tour No. 1 crown from World No. 1 Jon Rahm after their two-man showdown over four rounds in the season-ending Tour Championship in Atlanta.

McIlroy’s final day over the East Lake course was a mix of a sixth hole eagle, in landing his 186-yard second shot to six-feet, four birdies but also a bogey and a seventh hole double-bogey when he drove into trees and had to chip-out sideways.

In between, his 10th full PGA Tour season was capped in capturing a 19th Tour win at the Wells Fargo Championship and the 28th victory of his pro career.

McIlroy posted six other top-10s including a fifth at last November’s Masters, a seventh at the U.S. Open and losing out in a play-off for bronze medal at the recent Tokyo Olympics.

“Looking back over my year it was some good and some bad,” said McIlroy.

“It started okay. Well, actually it didn’t. I got some decent results at the start of the year but it never felt really comfortable. And then there was that transition period when I started working on some new stuff.

“Struggled a bit in the springtime, sort of Players, Match Play, Masters, but after that it got pretty good. The win in Charlotte was nice.

“Overall, I feel like it’s been a work-in-progress from April onwards, but I think it’s been going in the right direction”.

McIlroy’s expected 12th place final 2020/21 FedEx Cup standing sees the goal of becoming the first to win the FedEx Cup titles now on hold to this time next year.

However, for the time being McIlroy is looking forward to a fortnight at home with his wife and one-year-old daughter, Poppy.

“I’ve got two weeks at home. First week I’ll relax. It’s been — this is like eight out of ten weeks and it’s been Europe, Japan, back here, a lot of travel, a lot of time without the family,” he said.

“So, I’ll go home and be a husband and a dad for a week, and then I’ll start to ramp it back up and get prepared for going up to Wisconsin”.