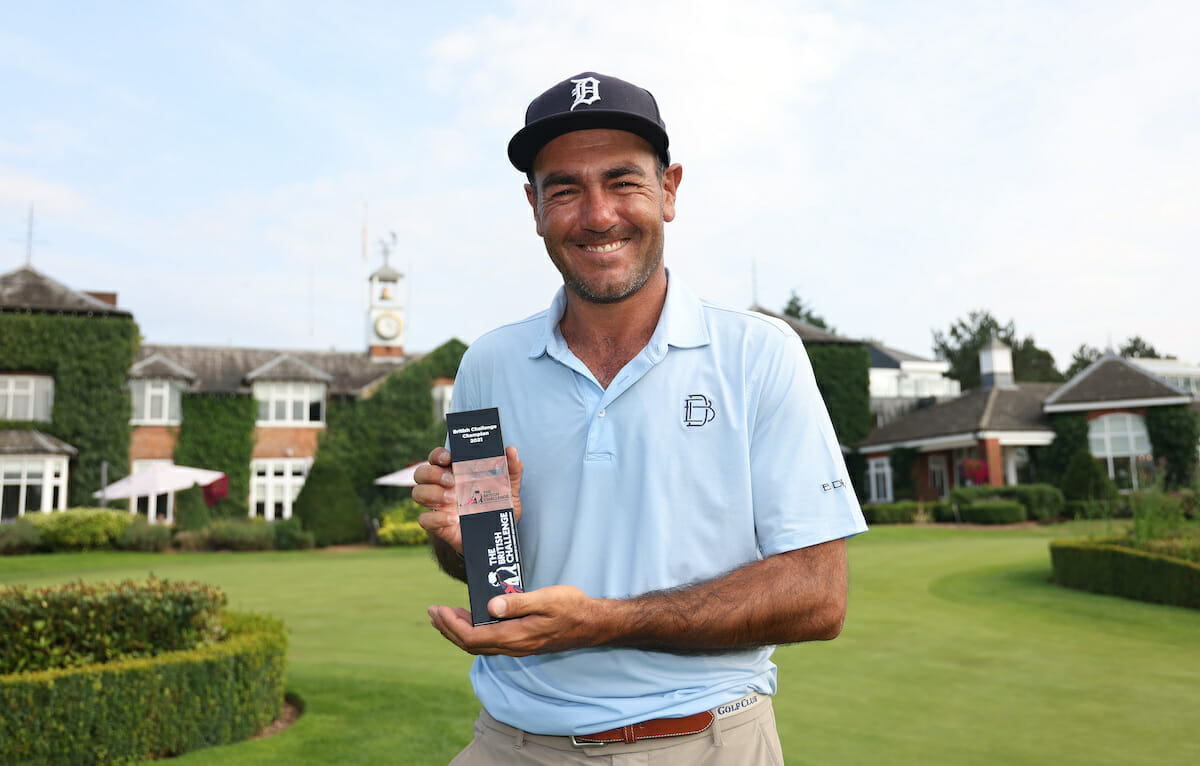 Hugo Leon of Chile pictured after winning the British Challenge Presented by Modest! Golf Management at The Belfry on September 05, 2021 in Sutton Coldfield, England. (Photo by Matthew Lewis/Getty Images)

Gavin Moynihan and Michael Hoey both returned final rounds of 69 at the Belfry to grab strong finishes at the British Challenge presented by Modest! Golf Management.

Moynihan will have enjoyed the ‘best of the Irish’ tag as he claimed 18th place on 12-under par while Hoey was two shots further back on 10-under, both though a long way off the 19-under winning total of Hugo Leon.

John Murphy recovered from yesterday’s 75 to record five birdies with just the one dropped shot in his 68 for a T33 placing while Tom McKibbin snagged a second straight 71 for a 5-under par total and a T49 finish.

Leon finished with back-to-back birdies to earn an emotional first victory on European soil and the Chilean bounced back from a double bogey on the par three 15th hole to post a three under par round of 69 and reach 19-under par, one stroke clear of playing partner Oliver Bekker, who finished second on 18-under.

The 36-year-old was unable to compete for 15 months due to travel difficulties posed by the Covid-19 pandemic, therefore making today’s victory extra special for the man from Santiago.

“I wasn’t able to travel for a long time and not being able to come over here, I felt like I was losing my category and I wasn’t getting a chance to get to play for something that I’ve worked so hard to get to. Now, being here, and preparing, I’ve put in so much work for this. I put in endless hours. I gave it everything I have so being able to get one this time is such a rewarding feeling, especially at a place as iconic as here.”

Leon made the turn at two under par following a blemish free front nine and, despite the double bogey at the 15th, always felt control of his game throughout the final round.

“I was very steady; on the fairway, on the greens, giving myself chances and I felt very good out there,” he said.

“My putting was very, very good. I missed a couple of putts on the start of the back nine and felt that I could’ve run away with it but I felt good. The stroke was good, the game was very good, everything was going well, everything was going as I envisioned but golf’s got a funny way of testing us. I hit a poor shot on 15, caught a bad break there and before you know it I was in a four-way tie for the lead with a few holes to go.

“The way I played 17 was really pleasing. I hit a perfect tee shot, a perfect wedge and a perfect putt, that was what I will take out of this experience, the way I hit it on my last two holes. Every single one was flush, exactly where I was going. That is the ultimate reward, being able to perform when everything is on the line.”

Portugal’s Ricardo Gouveia had a third win of the season in his sights but eventually had to settle for a tie for third place with Germany’s Yannik Paul on 17 under par, while Spain’s Javier Sainz secured his best career finish by joining Englishman Nathan Kimsey in a tie for 16th place.

With his victory in England, Leon moves to 12th on the Road to Mallorca Rankings, which are still led by Spain’s Santiago Tarrio, with Gouveia currently in second place.