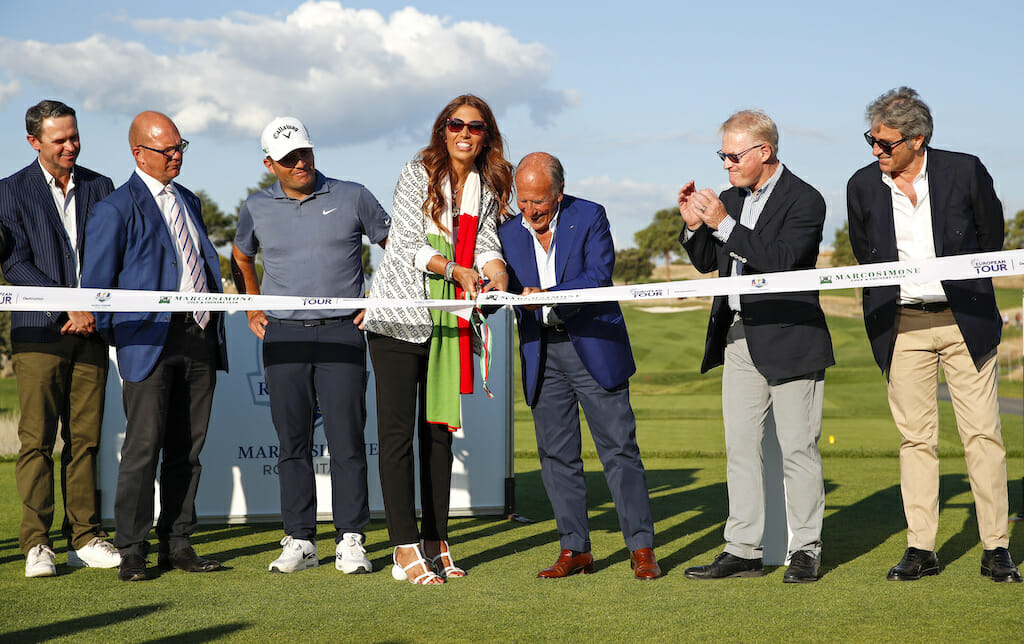 The official opening at the revamped Marco Simone Golf Club on September 01, 2021 in Rome, Italy. (Photo by Luke Walker/Getty Images)

Marco Simone Golf & Country Club has formally welcomed its first major event – this week’s Italian Open – following extensive renovation work as the venue on the outskirts of Rome continues its preparations ahead of hosting the 2023 Ryder Cup.

Representatives from Ryder Cup Europe, the Federazione Italiana Golf and Marco Simone Golf & Country Club gathered outside the clubhouse for a ribbon cutting ceremony to acknowledge the occasion on the eve of this week’s DS Automobiles Italian Open on the European Tour.

It is the second time Marco Simone has hosted Italy’s national open, having previously done so in 1994, and this week represents another important milestone for the venue, built and owned by the Biagiotti family who run global businesses in fashion and fragrance, as it showcases its significant redesign to a global audience for the first time.

Italian Ryder Cup player Francesco Molinari who entered the history books by winning a maximum five points in Europe’s victory at Le Golf National in 2018, is among the first players to take on the spectacular course, which underwent 18 months of renovation work including the redesign of all 18 holes.

The redesign project at Marco Simone, led by European Golf Design in co-operation with Tom Fazio II, focused creating a golf course specifically with the drama of match play in mind, with the previous layout rerouted not only to provide numerous risk and reward opportunities for the world’s leading players, but also to maximise the natural rolling countryside terrain.

It means spectators will have unrivalled vantage points of the on-course action as well as distant views of the famous Eternal City, including spectacular views of St Peter’s Basilica and of the Castle of Marco Simone which together will provide the backdrop to golf’s greatest team contest.

Franco Chimenti, President of the Federazione Italiana Golf, said: “With the first Italian Open at the new Marco Simone Golf & Country Club, the path to the 2023 Ryder Cup comes alive. A sustainable golf course, representing international excellence, it is our pride not only for golf but for all Italian sport. The unique charm of Rome, combined with the adrenaline of the match between Europe and the USA will make the Italian edition unique. I thank all the institutions, Ryder Cup Europe and Marco Simone Golf & Country Club for supporting the development of the project.”

“The redesign project at Marco Simone is spectacular and we are delighted to showcase it to a global audience at this week’s Italian Open, giving fans a glimpse of what to expect when the venue welcomes golf’s greatest team contest in 2023.

“The global pandemic has restricted our opportunities to share several key moments in the reopening process, so we are also delighted to be able to join Lavinia Biagiotti and her team today, along with Franco Chimenti, Gian Paolo Montali and everyone at the Federazione Italiana Golf for this significant occasion which is the culmination of months of hard work and collaboration.”

Lavinia Biagiotti, President of Marco Simone Golf & Country Club, said: “After 27 years Marco Simone Golf & Country Club is excited to host the prestigious Italian Open and we are delighted to welcome the world’s best golfers to our newly renovated course. We are proud to showcase our unique destination to a global audience and we hope to inspire the next generation of Italian golfers as we look forward to hosting our national open and the 2023 Ryder Cup in the coming years.

“I would like to thank the Federazione Italiana Golf and its visionary President Franco Chimenti, along with Gian Paolo Montali, CONI and their President Giovanni Malagò, the European Tour and Ryder Cup Europe, the Biagiotti Group, our local and national institutions, Marco Simone’s CEO Emilio Carbonera, and the dedicated Marco Simone team that are all part of this incredible journey.”

Gian Paolo Montali, General Director of the Ryder Cup 2023 Project, said: “We are very proud to inaugurate the new Marco Simone Golf & Country Club golf course, venue of the 2023 Ryder Cup, with a great international tournament like the Italian Open. As promised, the golf course is ready thanks to the tremendous effort and coordination between the Italian Golf Federation, Marco Simone Golf & Country Club, Ryder Cup Europe and European Golf Design. The journey continues.”

The redesign of Marco Simone Golf and Country Club began in August 2018, with the back nine completed and reopened in October 2019 followed by the full 18 holes in October 2020.

In addition to the extensive work to the golf course, the clubhouse is currently undergoing further renovation which will be completed in 2022, and a new practice ground which will be constructed in the spring of 2022.

Part of the European Tour Destinations network, Marco Simone will host two further editions of Italy’s national open in 2022 and 2023, before becoming the third venue in continental Europe to host the Ryder Cup following Valderrama in Spain (1997) and Le Golf National in France (2018).