Højgaard makes it three wins by age 20 in Switzerland 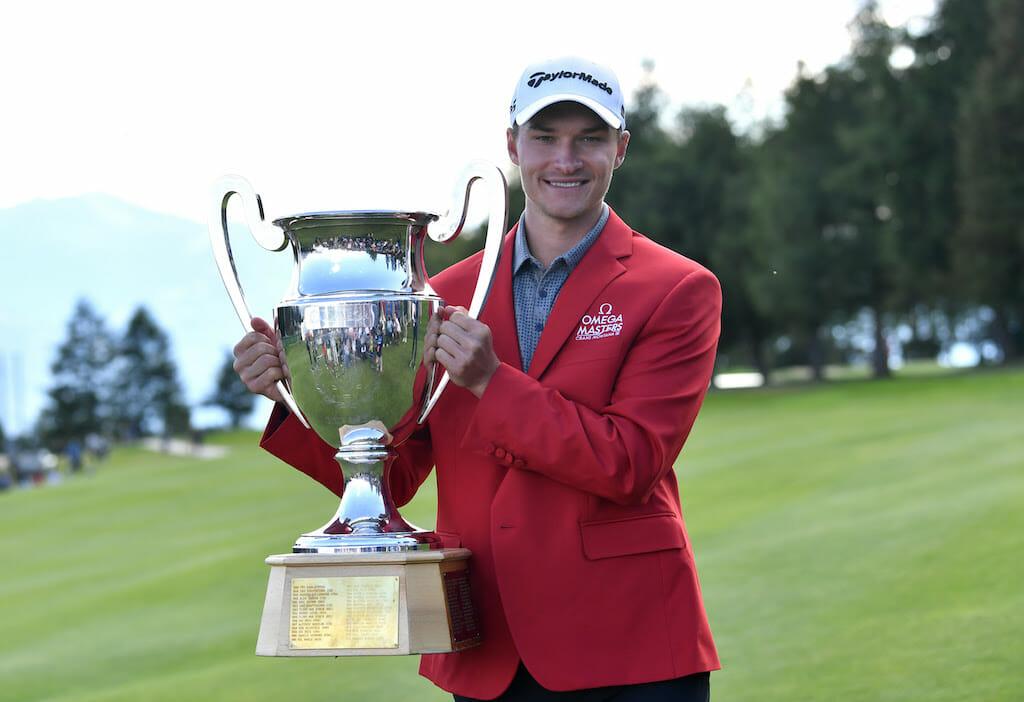 Rasmus Hojgaard poses with the trophy after winning The Omega European Masters in Switzerland. (Photo by Valerio Pennicino/Getty Images)

Rasmus Højgaard became a three time European Tour winner at the age of 20 after producing a closing bogey free 63 to come through the field and claim a one shot victory at the Omega European Masters.

The 18th hole at Crans-sur-Sierre golf club proved crucial on Sunday, with Højgaard holing his nine foot birdie putt there to get to 13 under par. He walked off the course trailing Bernd Wiesberger by one shot, but that all changed as the Austrian found the water at the last to surrender a double bogey and slip to 12 under.

Højgaard’s nervous wait continued as the final three groups finished off their rounds, but with none of the remaining players able to match his 72 hole total, he was crowned King of the Mountains, becoming the third youngest player to get to three wins on the European Tour, following Matteo Manassero and Seve Ballesteros – a three-time winner of the even.

“At the moment it’s a bit surreal to be fair,” he reflected. “I didn’t expect to be in this position but it’s amazing. I knew I had to make a birdie (at the 18th) to have a chance to maybe get in the play-off, so we were just trying to set up a chance. I made a birdie and then we had a bit of a strange ending. It was crazy.

“That’s by far the most nervous I’ve been the whole day (over the putt at the 18th). But it’s so nice to have the crowds back to cheer you on. That was a great moment.

“I’m very proud. With some of the players who have won it, it’s very special. It’s an amazing place and I can’t wait to come back again.

“I’ve been playing well the last three days and I know I had a low round in me. Today was the day, I guess. I was just trying to give myself chances and stay patient, I knew there would be chances on the back. Just had to keep doing my thing and I got on a little run on the back nine.

“I’ve been struggling quite a bit the last few months. Had a good week in London, trying to find my game a little bit again and it was right here again.”

Wiesberger finished alone in second, one shot behind Højgaard, with Henrik Stenson another shot behind on 11 under after par. English pair Matthew Jordan and Ross McGowan joined American Sean Crocker in a tie for fourth at ten under par.

Clandeboye’s Jonathan Caldwell signed off with a two-under 68 to tie 53rd at even par.