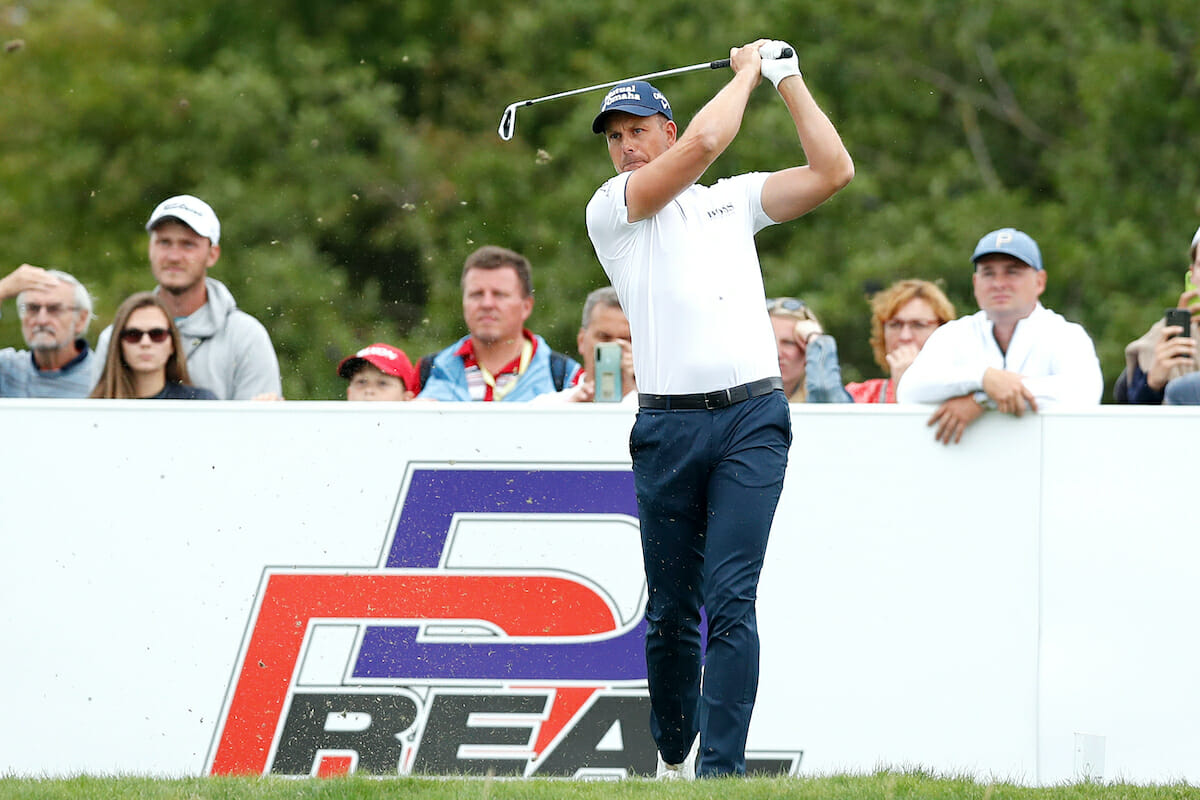 Henrik Stenson of Sweden plays a tee shot on the 13th hole during Day One of The D+D Real Czech Masters at Albatross Golf Resort on August 19, 2021 in Prague, Czech Republic. (Photo by Oisin Keniry/Getty Images)

On the verge of turning 50, Padraig Harrington has proved many times already this season that he still has the right stuff to mix it on the main European & PGA Tours and his opening round of 70 at the D&D Real Czech Masters is just another case in point.

Harrington started on the back nine and did all his scoring in his early holes as he carded three birdies and one bogey in his opening eight holes before turning in 34 and parring all the way home, for a two-under par 70.

That leaves Harrington three shots off the pace being set by Maverick Antcliff and Henrik Stenson who share the first-round lead after carding five under par rounds of 67 at Albatross Golf Resort.

Of Ireland’s other protagonists, Gavin Moynihan is one shot adrift of Harrington on 1-under par while it was an unhappy day on the course for Michael Young and Niall Kearney who both recorded 4-over par rounds and need a good second round to be in with a chance to make the cut.

With Harrington in the field and only four counting events remaining before the team is finalised, Stenson is undoubtedly hoping to make a case for Ryder Cup selection and a seat on the plane to Whistling Straits and he got a perfect start in the Czech capital.

The highlight of the Swede’s bogey-free round came on the par five ninth hole as he hit his second shot with his famed three wood to within three feet, tapping in for eagle.

“I’m very happy with the score. I hit some really good shots, on nine in particular, those two good ones,” said Stenson.

“There were a couple of swings I’m not overly happy with – my commitment – I’ve been working hard on the swing, I need to keep on working hard. I still managed to miss in the right places and kept it tidy around the greens and the putter was working fine today. I’m happy with the score and the progress I’m making. Commitment can be a little better and confidence can definitely be a little bit better.

Antcliff, of Australia, moved to five under par with his sixth birdie of the day on the par four 17th hole while nine competitors share third on four under par, including home favourite Ondřej Lieser, who recovered from bogeys on his opening two holes,

“What I felt, you can see on the first two holes – I hit the two worst wedges I’ve hit for a long time. I was shaking. Playing with these two legends, it blew me away. I couldn’t sleep for the last three days. It was a nice feeling; they were so nice to me. They helped me through after the tough start and then we all played solid golf. It was nice to catch them, make some birdies and from the fourth hole I felt comfortable being there with them,” commented Lieser.

2016 champion Paul Peterson of the United States and 2016 Masters Tournament winner Danny Willett, who is also staking a claim for a place in Pádraig Harrington’s team at Whistling Straits next month are also in the group on four-under.