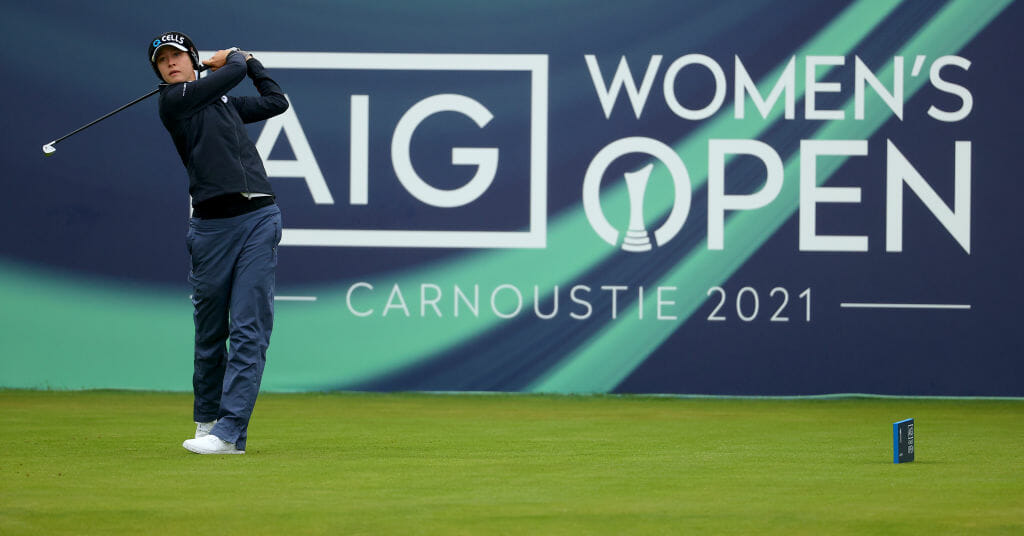 Nelly Korda of The United States tees off on the first hole during the first round of the AIG Women's Open at Carnoustie Golf Links on August 19, 2021 in Carnoustie, Scotland. (Photo by Andrew Redington/Getty Images)

Ireland’s Leona Maguire and amateur Lauren Walsh enjoyed solid starts to the AIG Women’s Open and are at level par and 2-over par respectively after day one in Carnoustie.

Maguire carded three birdies and three bogeys in her level par round and finds herself T41 heading to the second round while it was four bogeys and two birdies for Walsh who is in T90 and will need to go under par in round two to have any chance of making the cut.

Both players trail world number 1 and recent Olympic gold medal winner Nelly Korda, who maintained her rich vein of form and shares the first round lead on five-under par alongside Korea’s Sei Young Kim and Madelene Sagstrom from Sweden.

Korda moved quickly to the top of the leaderboard and the American, who claimed the KPMG Women’s PGA Championship in June, closed with an impressive four birdies in her last six holes as she seeks to claim a second Major championship title.

“I played well. Took advantage of kind of the calmer day. It was definitely chillier in the morning. I’m not used to that coming from Tokyo. But I think I just took advantage of all my opportunities and played some solid golf,” said Korda.

“I cut it a little close on 17. I was a little nervous coming off of that tee box, but I just hit a really good 6-iron into probably, I don’t know, six feet, and the next hole I hit a really solid drive, which is really important on that 18th to make sure that it doesn’t drift out right into the bunkers. I hit two really good shots, and I gave myself another look for birdie.”

On a calm, overcast day, with the Angus links softened by overnight rain, a number of players thrived in the conditions.

Local amateur Louise Duncan delighted the home crowds with a superb four-under par round of 68 to sit just a shot off the lead. The 21-year-old Scot won the 118th Women’s Amateur Championship at Kilmarnock (Barassie) in June and continued her love for links golf, highlighted by an eagle at the par-5 14th and four solid closing pars over Carnoustie’s demanding finish and she sits in T4 position.

Duncan’s playing partner Georgia Hall, the 2018 champion, rekindled her affection for the championship after the English player recorded six birdies with just two bogeys for her 68.

American Andrea Lee, who started with three birdies, and Yuka Saso, the reigning US Women’s Open champion from the Philippines, also enjoyed excellent first rounds to join Hall and Duncan on four-under-par.

Defending champion Sophia Popov chipped in at the first for a birdie but endured an up-and-down day in signing for a level par round of 72.