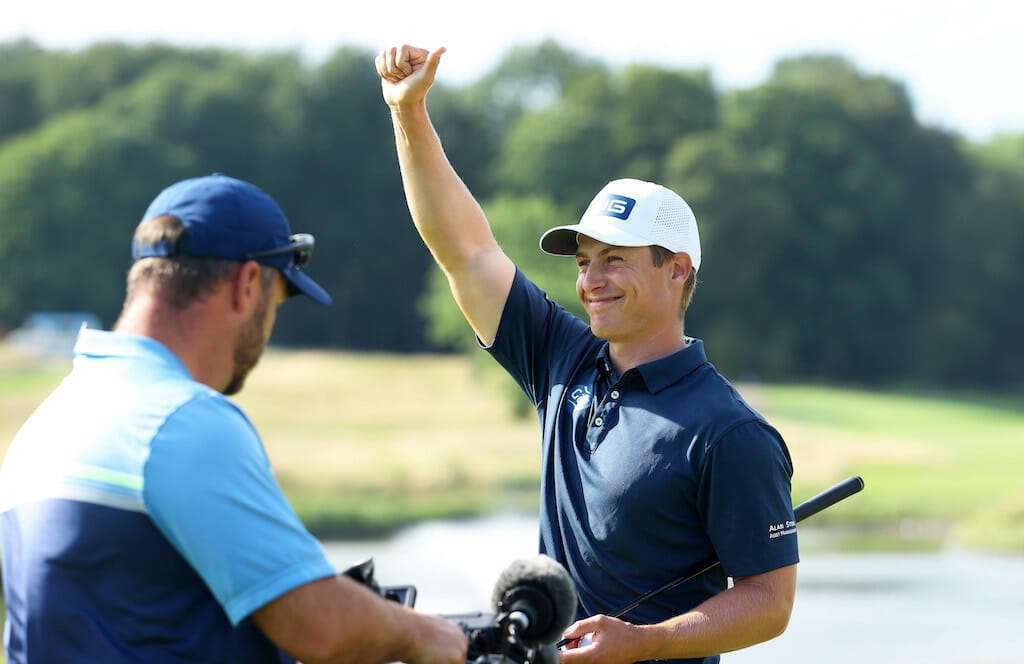 Hill, 26, held his nerve to win by a shot with a closing 67 for a 16-under par tally on the London Club in Kent. Alex Levy posted a sizzling 64 to finish runner-up at 15-under par, though he had to wait five-holes before Hill calmly parred the last to decide the Frenchman’s fate.

Hill joins good friend Grant Forrest not only as Tour maiden winners but with the pair combining for just a lucky 13th Scottish consecutive victory toast in the 49-year history of the Tour.

Hill said: “It feels brilliant and I’m delighted to win my first Tour victory. I’m happy with how I managed to play my last nine holes and I am really proud of what I managed to do.

“This week I wouldn’t say I was in as good a position as last week but it’s hard to win a golf tournament and I am just very happy with how I played. It’s really cool also to know Grant and I are the first Scots to win back-to-back in some time and even better as we’re both with Bounce Sports Management and they’ll be delighted with that.”

It seemed just a matter of time before the Kirkcaldy golfer would break through for a maiden Tour title having picked-up a first of five top-10s earlier this year in Saudi Arabia.

Last week, Hill had gone within a whisker of winning at the Fairmont Resort and later earned the praise of new Tour champ and good friend Grant Forrest when Hill led the victory ‘water’ spray over Forrest. And Hill revealed how a text message from Forrest helped inspire him this week.

He said: “Grant sent me a really nice text message saying that you’re a really good player and it won’t be long before it’s your time. I didn’t really expect that, so it was a nice touch and it’s nice to get messages from your friends and peers like that.”

There was a great moment as Hill walked from the 18th to be handed his phone with girlfriend Miranda on the phone but she was screaming so much in delight she handed her phone to a friend.

Hill went into the final round of just his 43rd Tour event sharing third place three off the lead but a bogey on four, a first dropped shot in 42 holes, had the Scot lying four from the front. The three-time Challenge Tour winner regrouped with birdies on five, eight and nine to make the turn for home at 13-under and now just two behind.

Hill made it a hat-trick of birdies sending a four-footer to the bottom of the cup at the short par-4 10th with Scot then finding himself in a momentary four-way share of the lead in holing a 12-footer for par at 11. A week ago, Hill had bogeyed 10 and doubled 11 to let slip a first Tour win in the Hero Open at St. Andrews.

Hill then joined Levy in the lead on 15-under by holing a five-foot birdie gem at 13 for a third day running with Levy moments later putting out to set the mark on 15-under.

From there it was Hill’s to win with the Scot, displaying his only real emotion all day with a fist pump in grabbing a fifth birdie of the day at 15 ahead of a trio of closing pars. No doubt helping Hill is that he knows how to win having had three wins on the secondary Challenge Tour while he’s had two other pro victories – San Juan Open and his Outlaws Tour win four years ago this week at the Arizona Open.

He said: “It’s been brilliant also to have won around the world as you want to become a habitual winner so that it becomes a process that you are very comfortable with.

“If you managed to accompany that at every level before playing here.  It’s taken me a little longer to get it done here on the European Tour but I am very happy with how I felt over the last nine holes today and how I handled the situation.

“I hope now I can just keep pushing on and whenever I again get in a situation like I did today, I hope I feel as comfortable as I was today.”

The last time Scots won back-to-back on the European Tour was nine years ago when Paul Lawrie captured the 2012 Johnnie Walker Championship at Gleneagles and a week later Richie Ramsay won the Omega European Masters in the Swiss Alps. There’s been two such similar feats in the last 20-years while there’s been Tartan back-to-back wins now just on 13 occasions in the 49-year history of the Tour.

Victory lifts Hill 10 spots to 22nd on the Race to Dubai and to a career high at 96th in the World Rankings.