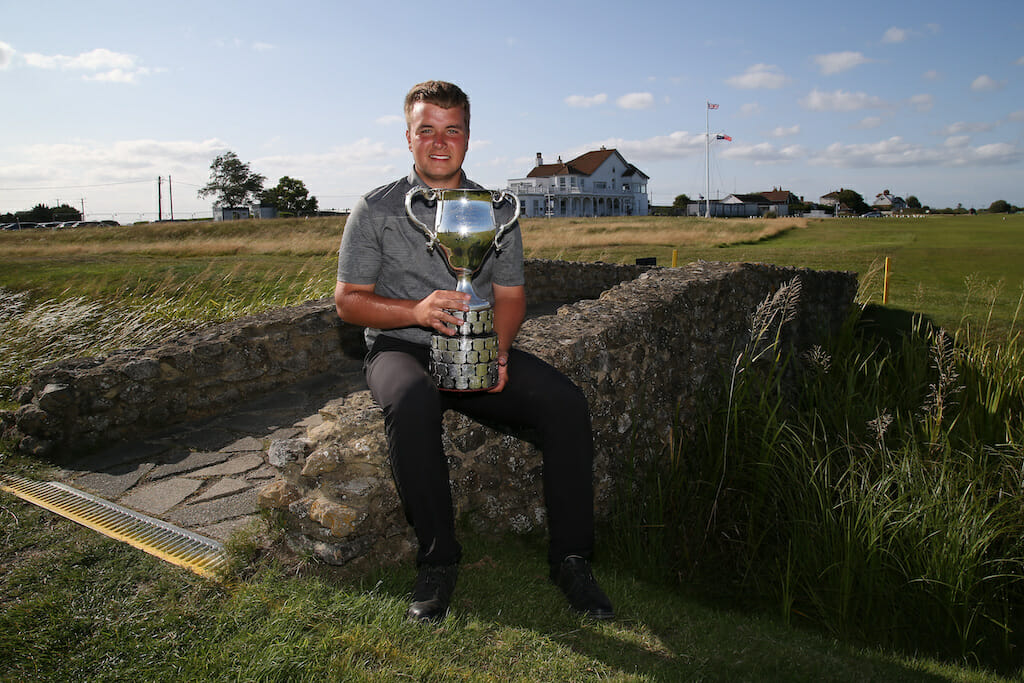 After the pair could not be separated after the regulation 36 holes, it was the England international who held his nerve in a sudden death shoot-out to lift the biggest title of his budding amateur career.

Bigham capped off a fantastic individual week after progressing through the stroke play stage as the leading qualifier and continued a fine run of form in the match play stages where he went on to claim victory in the championship’s centenary year.

“What a moment after holing that putt on 18, particularly after the horseshoe putt on 17,” said Bigham. “I am over the moon, obviously. I was playing great in the stroke play and just continued all the way through to the final. I was a little bit sloppy in some areas today, but I managed to get the job done.

“It is my only win and I am so happy as it was in my last junior event as well.”

He now joins a long list of famous names including Jose Maria Olazabal, Sergio Garcia and Matt Fitzpatrick to lift the trophy and gains exemption into next year’s Amateur Championship, the US Junior Amateur Championship and Final Qualifying for The 150th Open at St Andrews.

Both players settled into the final quickly, with a pair of pars easing the nerves. Bigham then made the most of a clever approach shot into the par four 2nd with a birdie three to take the early initiative. He remained one-up before seizing control of the contest early on with another birdie, this time on the 6th.

However, the Italian took the opportunity to mount an early fightback after mistakes by Bigham at the 9th led to a double-bogey.  A further bogey was to follow two holes later to leave the match all square after 11 holes, before Fantinelli produced a birdie of his own on the following hole to see him lead the match for the first time.

That lead remained intact up until the final hole of the morning’s play, with Bigham rolling in a birdie on the 18th to leave the match all square again at the halfway stage.

It was Fantinelli who came out of the blocks after the restart, making birdie on the 19th with a three to regain his advantage. However, Bigham responded with a birdie of his own two holes later to bring the match level yet again.

Nip-and-tuck golf continued with neither player managing to create a sizeable lead, but it was Fantinelli who began to assert his authority going into the remaining nine holes.

A bogey on the 28th hole for Bigham put the Italian back in front and that lead remained in place throughout the next five holes, where a bogey five from the Englishman on the 33rd hole put Fantinelli two up with just three holes to play.

However, a bogey from Fantinelli on the par-5 16th hole, the 34th of the match, opened the door for Bigham to mount a last ditch fightback. Despite missing a golden birdie opportunity on the 35th hole, he more than made up for it by making a clutch birdie three under pressure to send the match to extra holes.

A topped tee shot from Fantinelli led to a situation from which he couldn’t recover and was unable to match Bigham’s par four to give the Harpenden member the first win of his amateur career.