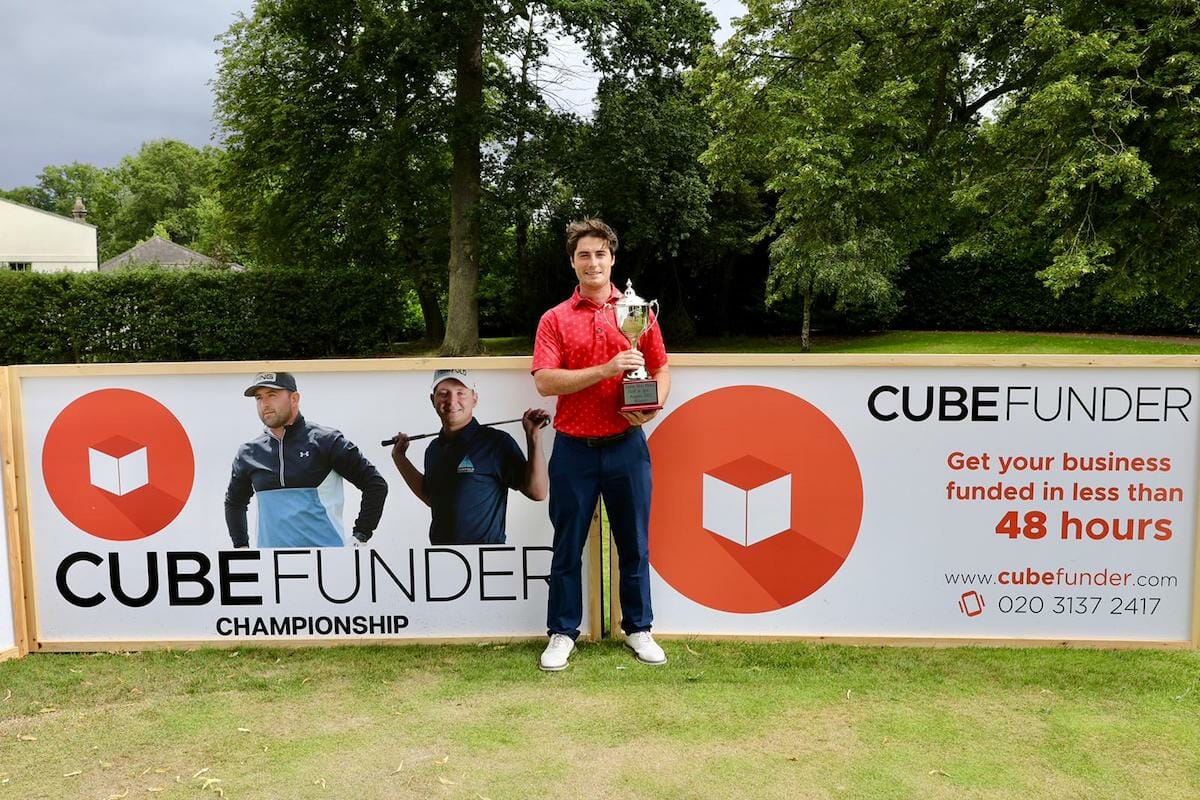 Ballymena’s Dermot McElroy fired a brilliant final round 64 to set a clubhouse target not for catching and claim top prize at the EuroPro Tour’s Cubefunder Championship.

The 28-year old went into the final round trailing by four strokes but soared to the front with nine birdies in his eight-under par 64, moving through to 14-under to set a mean target.

In the end it proved enough to win by two for the Northern Irishman who goes one place better than his runner-up finish at the Worcestershire Masters in July.

“I’m obviously delighted,” said McElroy. “I had a number in my head at the start of the day – I thought if I could get to 15-under, nine-under on the day, I thought that would have a great chance.

“I got off to a great start – four birdies in a row – and I thought ‘right, I’m back in the tournament’. I just continued to play well after that, six-under after nine and I knew I was there, thereabouts. Didn’t look at leaderboards, just kept playing the game and only looked at the leaderboard when I was coming down the last hole – I seen I was tied for the lead.

“But yeah, I’m absolutely delighted just to play so well. It was a windy day so it was a good score.”

It’s a continuation of a remarkably consistent campaign for McElroy who’s made seven cuts from eight starts on the Tour while he also impressed on the Challenge Tour this term, winning this year’s Christy O’Connor Jnr award at the Irish Challenge before enjoying a top-20 finish at the European Tour’s World Invitational at Galgorm Castle.

Still, when he came in off the course on Friday, McElroy remained tied for the lead, one shy of the target he set himself at the start of the day. After a good chance went a-begging at the last, did he think he’d done enough to take the win in regulation play?

“Not really no,” he admitted. “I missed a six or so footer at the last hole and I thought that was the putt to win or even give me a chance at a playoff but the 13th hole, the 15th and 16th were playing very, very difficult. It was so firm out there and with the wind direction. I guess you never know but those holes were playing extremely tricky.”

And so it proved – McElroy’s 54-hole tally in the end good enough to win by two. Starting the week in 22nd on the Order of Merit where the top-5 earn Challenge Tour cards for next season, McElroy moves up to 4th spot with the win boasting a season’s earnings so far of £18,180 as he looks to progress onto Europe’s secondary tour for next season.

“It’s brilliant,” McElroy added. “I knew a win today would get me into the top-5. My main goal this year is to finish in the top-5 and get onto the Challenge Tour but you just have to win on this Tour [to make that happen].

“You could literally finish top-10 every week and not get top-5. It’s so concentrated with the money that you just have to win so it’s great to get it.”

McElroy will look to kick on now next week when the EuroPro Tour moves on to Clandeboye Golf Club, a course he knows well. Meanwhile, Wentworth’s Eoin Leonard completed the Irish scoring, signing off with a 72 for a top-10 finish at nine-under par.