Kearney just four back ahead of Cazoo Classic weekend 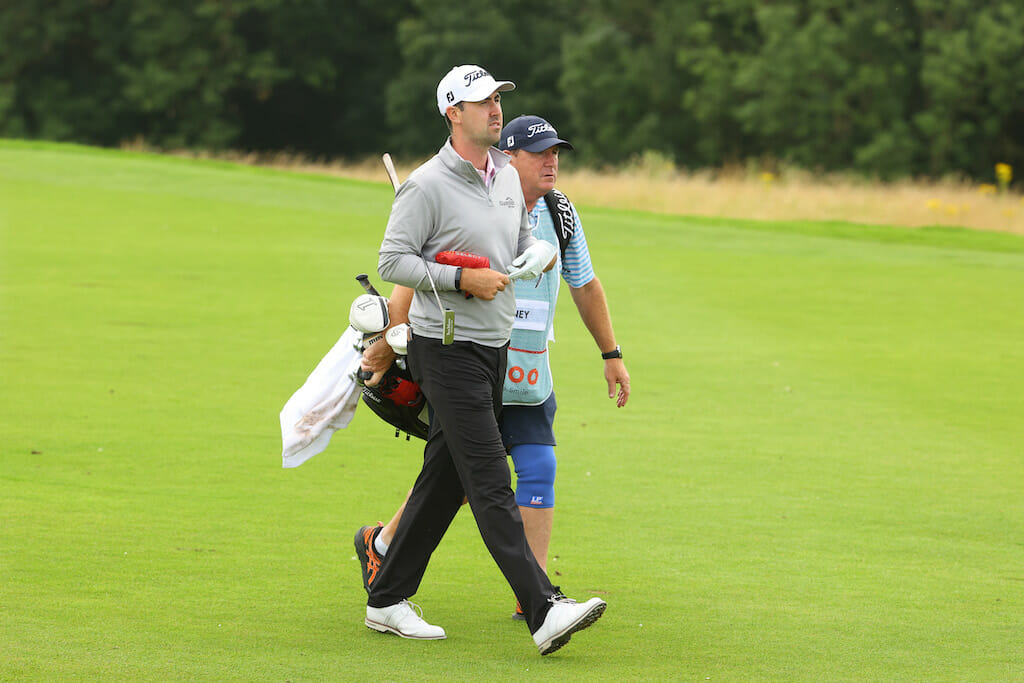 Niall Kearney remains right in the mix going into the weekend at London Golf Club after adding a two-under 70 to his opening 68 to move to within four shots of the lead at the halfway stage of the Cazoo Classic.

Following last week’s top-10 in Scotland, the Royal Dublin pro knows a big week could secure his European Tour card given he’s on the cusp of the top-110 on the Race to Dubai, currently in 121st place. At six-under par, Kearney sits in a tie for 8th, projected to move up 11 spots and just inside the top-110 after trading three birdies and one bogey on Friday.

He was joined in the weekend rounds by Clandeboye professional Jonathan Caldwell who carded an even par 72 to advance in a tie for 46th at two-under. Cormac Sharvin carded a nightmare 82 to miss the halfway cut while Paul Dunne pulled out after just nine holes on Thursday.

Meanwhile Rhys Enoch and Dale Whitnell share a one-stroke lead heading into the weekend at the Cazoo Classic, where British players dominate the leaderboard in the final event of the European Tour’s UK Swing.

Welshman Enoch carded the round of the day at London Golf Club with a bogey-free seven under 65 which moved him to a ten under par total. The 33-year-old already has two Sunshine Tour titles and one Challenge Tour victory to his name, but will enter the weekend seeking a maiden European Tour win.

Whitnell, meanwhile, has never led or shared a lead after any round on the European Tour and the Englishman is also seeking a first victory. His four under 68 also came without a single dropped shot and the 33-year-old parred every one of his final nine holes.

“It was solid, I haven’t missed many fairways today. The swing feels in good shape and I’ve just got to keep doing what I’m doing,” said Whitnell.

“Angie is great on the bag, she knows nothing about golf so there’s not a lot of input there other than moral support but it seems to work well so we just need to keep going what we’re doing.

“I’ve never led a tournament. When I was fourth at Close House I was maybe one behind, but I’ve just got to take all the experience I’ve had and hopefully it will stand me in good stead going into the weekend.

“This is what we’re all here for and fortunately I’m in that position this week so we’ll see what the weekend brings.”

England’s Jordan Smith and Callum Hill of Scotland, both of whom have had good chances to win during the UK Swing, share third place on nine under par after respective rounds of 69 and 67, while Richard Bland and Maverick Antcliffe are one stroke further back.