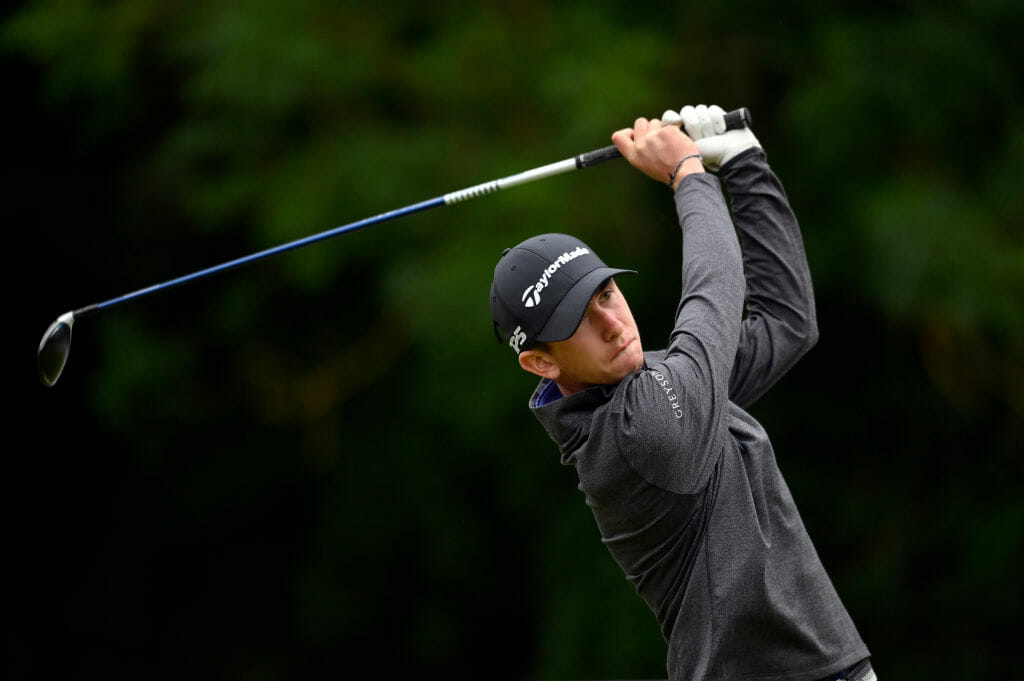 Tom McKibbin recovered from a disappointing opening 74 with a superb three-under 68 to join Michael Hoey in the final two rounds of this week’s Made in Esbjerg Challenge Presented by FREJA & TotalEnergies.

The Holywood teenager proved that he’s made of pretty stern stuff, trading four birdies with a single bogey in a brilliant second round effort that leaves him trailing just seven shots back of the lead ahead of a wide open moving day.

McKibbin sits in a tie for 38th at even par, the same score as Hoey who followed a day one 69 with a two-over 73 to fall off the pace on an albeit tightly packed leaderboard in Denmark where Conor O’Rourke and Robin Dawson both missed the cut by five strokes at plus-six.

Jesper Svensson will take a one-stroke lead into day three after posting a four-under par second round 67 at Esbjerg Golfklub. The Swede took advantage of the stunning weather in Denmark as he carded six birdies and and moved to a seven-under par total, one shot clear of Dormy Open winner Félix Mory on six-under.

The 25-year-old admitted that his second place finish in last week’s Vierumäki Finnish Challenge gave him a real boost coming into this week’s event and is very happy with his performance so far.

“I am very pleased,” he said. “I have been striking the ball really well and giving myself a lot of opportunities and a few of them rolled in so that’s good. You’ve really got to be in a good position off the tee and I’ve been hitting my driver really well and hitting a lot of fairways which really helps.

“I know I was playing well and I didn’t really see any other scores today but it’s a tough course and I was thinking I could be up there, and I am pretty pleased with the first few days.

“I really enjoyed last week, it was a lot of fun obviously being in the final group and getting a good score. Honestly my game feels really good, I hit a lot of fairways and greens so it’s a lot more fun this way!”

Svensson says winning this event in Denmark would be a massive turning point in his career as he focuses on securing his card for next season’s European Challenge Tour.

“It would mean a lot, because I am not quite sure if my card for next year is secured so this is a very important week for me,” he said.

“I started off the season pretty good, I’ve been playing on the Nordic Golf League on the ECCO Tour and MoreGolf Mastercard Tour, and I think I am seventh in the Order of Merit there so with a good week here, hopefully I can secure my place here on the Challenge Tour for next year.”

Four players share third place on five under par, including Scotsman Ewen Ferguson, who is still searching for his maiden European Challenge Tour victory after five top 20 finishes on the schedule so far. He shares third place with South African Hennie Du Plessis, Austrian Niklas Regner and Spaniard Samuel Del Val. The cut fell at one over par, with 70 players surviving to compete over the final two rounds.

The third round of the Made in Esbjerg Challenge will begin at 9:00am local time with Svensson teeing it up at 10:50am alongside Frenchman Felix Mory and South African Hennie Du Plessis.