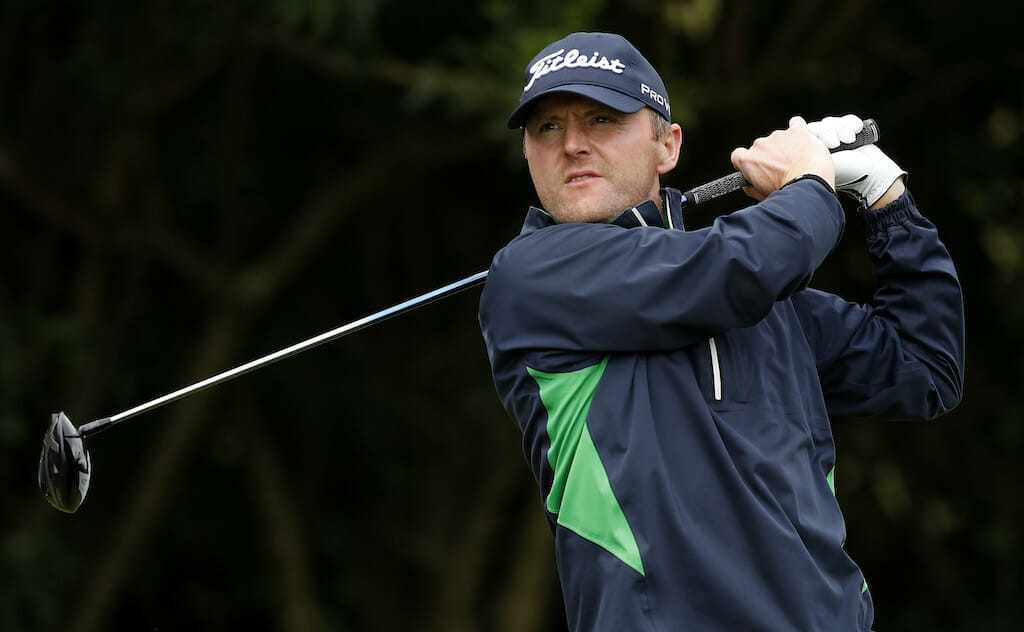 Michael Hoey posted a two-under par opening 69 in the morning wave to head the Irish challenge after day one of the Made in Esbjerg Challenge Presented by FREJA & TotalEnergies.

The 42-year old swapped four birdies with two bogeys in a fine day one effort that leaves him just outside the top-10 and only three shots off the early lead. Hoey enjoyed a tied-11th finish at last month’s Italian Challenge but it’s been a quiet campaign thus far for the five-time European Tour winner who sits in 55th on the Road to Mallorca standings.

This week marks the first of two consecutive events at Esbjerg Golfklub where Conor O’Rourke, Tom McKibbin and Robin Dawson will all hope to find rapid improvement after struggling on day one.

Holywood teen McKibbin recovered from a nightmare start at his opening hole – the 10th – where he racked up a treble-bogey ‘7’ before bogeying the 11th. Another dropped shot on 17 saw him make the turn in 40 but to his credit, McKibbin went to the well and came up with two birdies on a bogey-free homeward nine to card a three-over 74.

Tramore’s Dawson managed just one birdie in a four-over 75 while O’Rourke bogeyed four of his closing six holes in a 76, with all three players up against it to make the halfway cut.

Tim Widing will take a one-shot lead into day two after a convincing five under par opening round 66 at Esbjerg Golfklub. Widing carded four birdies and an eagle as he moved into pole position, ahead of a chasing pack consisting of Finnish duo Oliver Lindell and Lauri Ruuska, Spaniards Alejandro Del Rey and Samuel Del Val, Englishman Nathan Kimsey and Sweden’s Hannes Rönneblad, who all sit on four under par.

The 24-year-old believes that the key to success on the course is being able to find the fairway and take advantage of the birdie opportunities on the greens.

“I was very good off the tee today and was able to find the fairway a lot,” he said. “That’s definitely the key on this course. If you miss you can have some high scores out there and I was able to really go with the driver and give myself some great approach shots, which gave me a lot of good looks for birdie. My putter was really hot today as well so I just made birdies and kept the momentum going.

“The courses I’ve played the last couple of weeks have definitely been more wide open. You’ll definitely see it on the scores as well. I think five under is probably a really good score but I like that, tough courses, it’s definitely a test and you’ll really see who’s the best.”

The Swede has recently found his form in Scandinavia after finishing in tied 12th place at the Vierumäki Finnish Challenge last week and has recently turned professional. He admitted that he loves competing on the European Challenge Tour but needs to ensure he remains consistent throughout the four rounds in the tournament.

“I’ve enjoyed it,” he said. “I’ve been amateur for a while now, and you always dream of playing professional golf and I just made that step and in June. This is what I’ve been working on my whole life.

“I’ve been playing great every tournament I’ve played this year. I feel like I’ve been playing well, I just haven’t been able to get four good rounds together. The last couple of weeks I’ve been starting to get it together and, as I’ve seen in the last couple weeks, I feel like I can win on the Challenge Tour so this is definitely a great start. I’m just trying to shoot five under in every single round and see how that goes.”