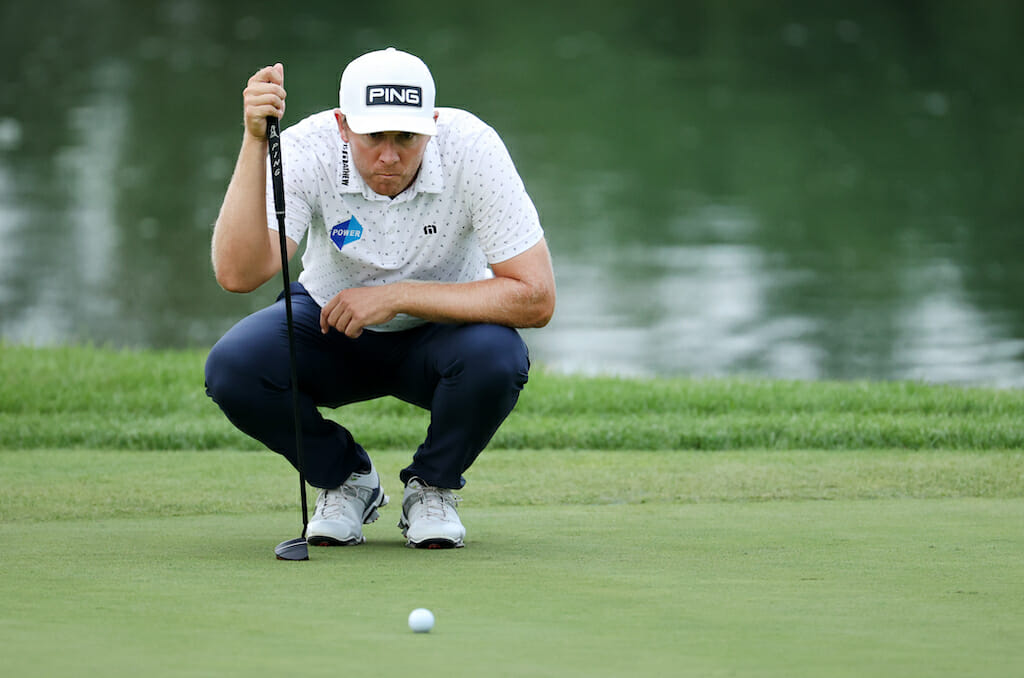 Seamus Power has crossed ‘The Pond’ so many times in his career but there was nothing to match the emotion of a recent trip home nor the comfort and a new sense of security in returning to the States.

Power is returning to competition as this week’s regular season-ending Wyndham Championship in Greensboro, North Carolina. It will be a fifth straight yearly visit teeing-up on the Sedgefield Country Club course but this week’s appearance will be extra special as Power tees-up as a PGA Tour winner. 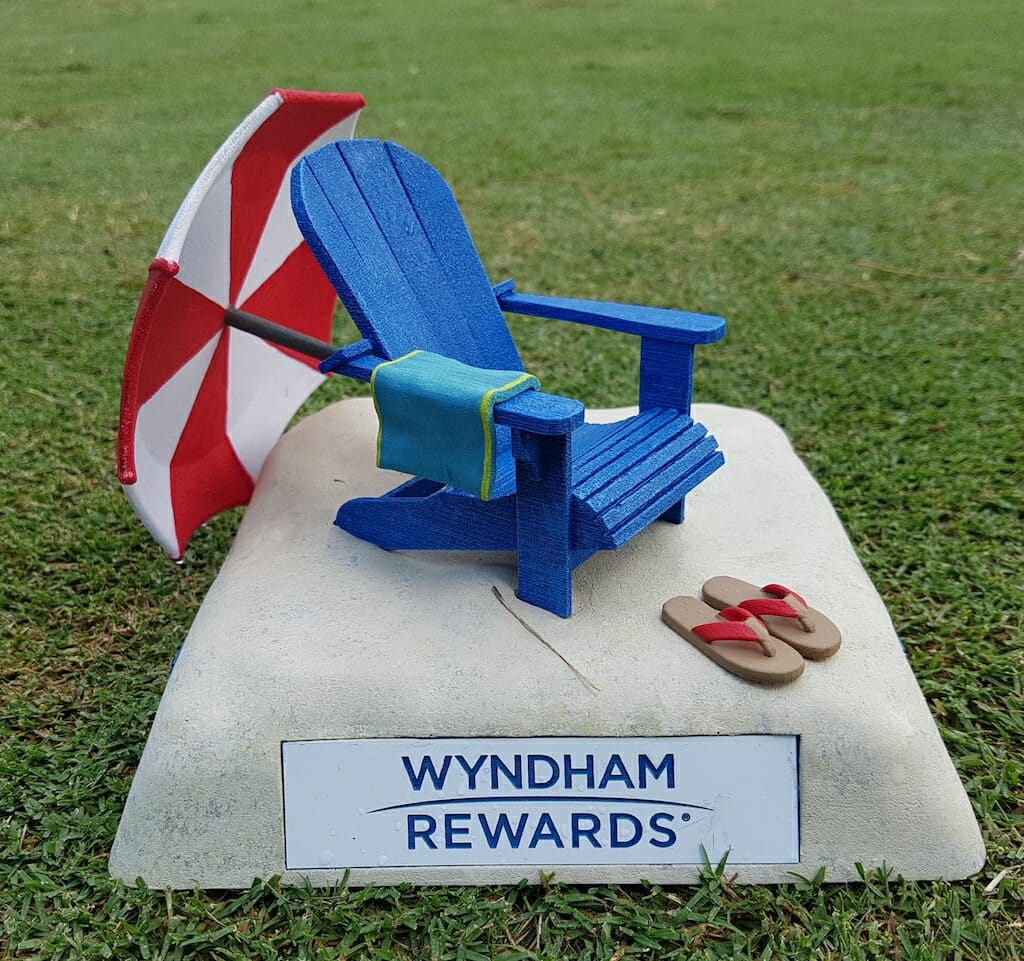 A unique tee marker found at the Wyndham 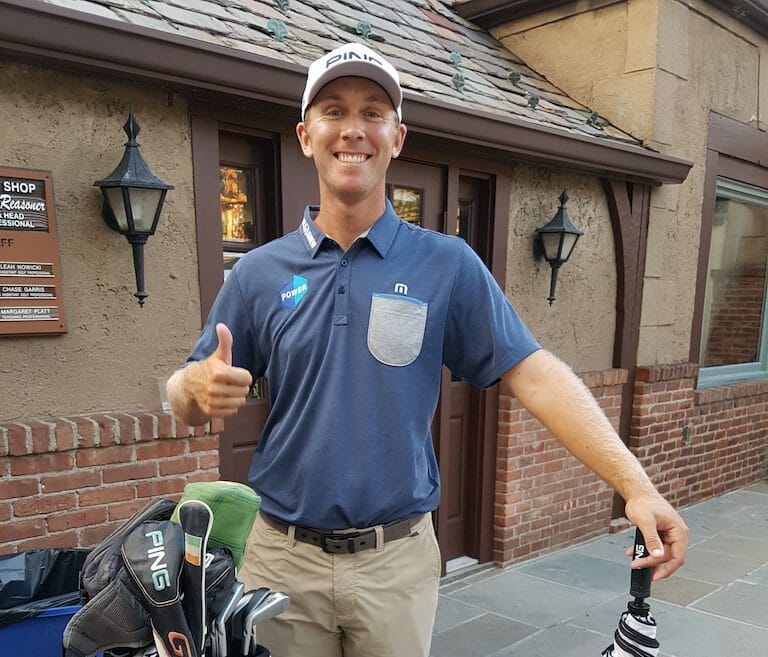 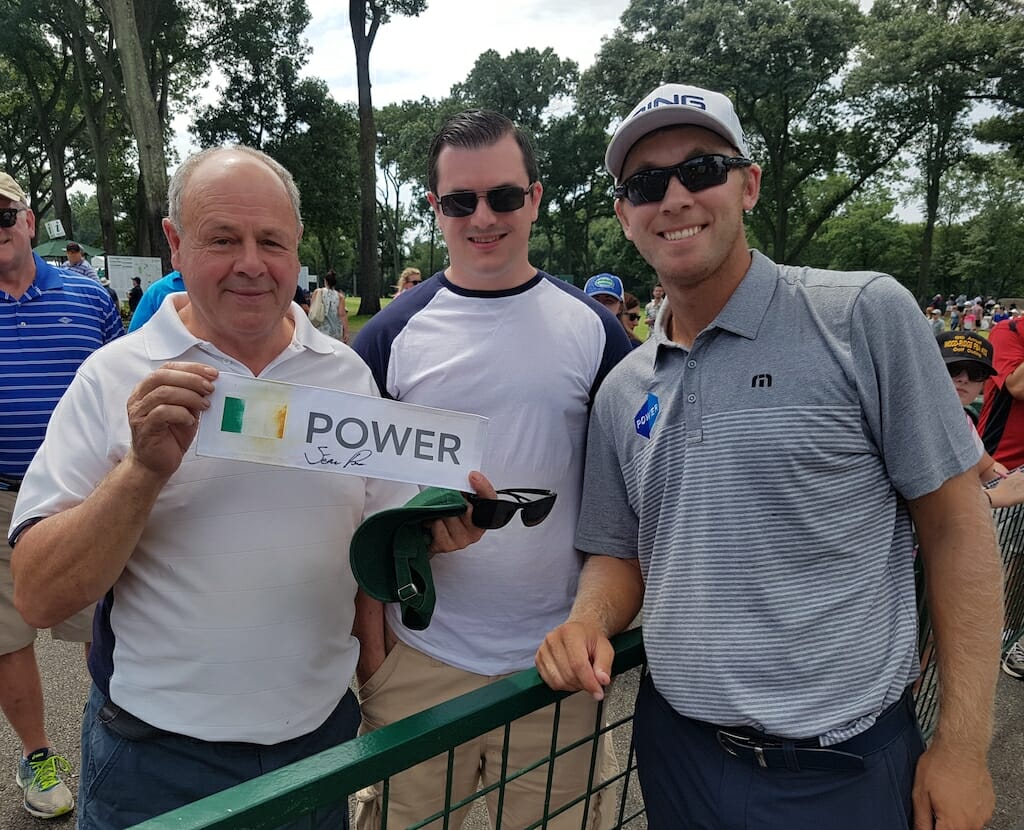 It had taken the proud Irishman 106 tournaments since his Tour debut at the end of 2016, and then the anxiety at the end of last month of a six-hole play-off in Kentucky to join the likes of fellow Irish Padraig Harrington, Darren Clarke, Graeme McDowell, Rory McIlroy and Shane Lowry winning on golf’s biggest stage.

Imagine his joy winging his way home to visit his father, Ned and seeing older brothers Jack and Willie and then stretching out on the return leg knowing he’s exempt on Tour till the end of the 2023/24 season.

“Heading home to Ireland as a PGA Tour winner was unbelievable,” said Power, who revealed he received well over 2,000 messages of congratulations following his maiden Tour win.

“It was probably the longest I have been without going home given the Covid restrictions, so it was always going to be special to see my dad, brothers and family.

“Then heading back on the flight to the U.S. was fantastic, as I’ve never had the luxury of going into the Wyndham, being a winner or leaving the event being inside the top-125 on the money-list.

“It was just a fantastic feeling sitting back on the return flight knowing that I have my Tour card for the next two years, and knowing that I can already plan my Fall schedule and not matter what happens in these two weeks. It’s going to be a huge bonus and something I’ve never had before playing on the Tour, so it’s going to be a nice feeling teeing-up on Thursday.”

The Wyndham Championship is like the Tour’s ‘Last Chance Saloon’ for players outside the top-125 on the money list striving to secure or retain playing rights for the following season. Power first went to the Wyndham in 2017 ranked 122nd on the money list but in missing the third round cut, he ended the year ranked 130th.

A year later, he arrived lying 123rd but missed the cut only for the unthinkable to happen with Sergio Garcia double-bogeying the final hole and thus allowing Power to finish the year 125th and secure the last full Tour membership card into the 2018/19 season.

In 2019, he went back to the Wyndham ranked 144th but a lowly finish saw him end his year at 143rd whereas a year ago, he arrived lying 159th but could do no better than improve his final standing by eight places to 151st. So, again it was back to the Tour School.

It’s why this week is uncharted territory for Power, lying 73rd on the money list with the assurance also of contesting one, if not, two of the three lucrative Play-Off Series events starting next fortnight with the Northern Trust in New Jersey. Who knows because if Power continues to produce the results he’s been achieving, including a pair of T8th’s in the lead-up to his Barbasol victory, he could be headed inside the top-30 for the season finale Tour Championship.

“That’s the goal, to get to the Tour Championship. Get a little momentum this week in the Wyndham going into Liberty National for the Northern Trust where the points really go up.

“I’ll have to play well in the Northern Trust and the BMW to get into Atlanta but that’s the goal. That’s where you want to be – East Lake. It opens up so many doors and would change my next season.”

As well, there’s the opportunity to boost his current $1.5m prizemoney purse this season  in his best year already by some $800,000. For Power, however, it’s not about the money.

“I’m not sure if the prize-money I won is going to change the way I am living but it definitely helps and makes those financial decisions a little easier,” he said.

“Though in saying that, playing on the Tour the prize-money is pretty good and even without the win, you can still earn very good money.

“No, it doesn’t change me and, if anything, it’s earning that exemption and that’s kind of stability that is going to change that I can really plan a schedule for the next couple of years which I have not been able to do for a long time.

“Yes, the money is brilliant in terms of putting something away for my eventual retirement but having the exemption really takes the pressure off competing and offers you that stability.”

And speaking of stability, have you ever wondered the origins of the POWER logo on all of Seamus’ attire. Many may have thought it was something Power put together himself but alas the Philadelphia-based Power Home Remodeling is the third largest home remodelling firm in the US.

The company was founded in 1992 and experienced rapid growth in the last 6 years under the tenure of Corey Schiller and Asher Raphael, the company’s current co-CEOs. In the last nine years, Power has grown from $100 million to $700 million in annual revenue.

“They approached me in 2016 when I was still on the web.com Tour and the company was looking to sponsor a player,” said Power.

“At the time, of course, I didn’t know anything about them but they a home remodelling company based in Philadelphia. They are now massive nationwide in the States and they have been unbelievable to me.

“They told me that they do not usually get a lot of commercial value but entertainment-wise they get enormous coverage. A whole bunch of associates travelled over to Ireland for a celebration a couple of weeks ago and they had great fun. I’ve been with them five years now and it’s been a great relationship.”

Indeed, the company retweeted the PGA Tour video tweet of Power holding the winning putt at the Barbasol with the message: ‘Congratulations to @Power4Seamus on his first @PGATOUR win #TeamPower’

Power has hinted of a change of residence in the States, revealing he may now elect to base himself in Las Vegas. The Irishman has long been residing in suburban Charlotte in North Carolina but in speaking with him late last week, he was located in Las Vegas.

“My cousin who lives here got married last Friday and that’s why I’m here,” he said. “Nevada is also one of the no-state tax states, as well. so I’m going to give it a shot. It’s hot at the moment, 115 Fahrenheit, what’s that, in the 40s (Celsius) or something.

“The good thing is it’s very easy to travel, good TPC courses here in Vegas, (TPC Las Vegas and TPC Summerlin), and a lot of cool things. I’ve got my cousin here. We’ll see how it goes. Vegas also has massive flexibility in travel over here, as well.”

Of course, Las Vegas is well known as the ‘Gambling Capital of the World’ and has plenty of high-class hotels and 24-hour restaurants and bars.

And it was rather funny that no sooner had Power mentioned Las Vegas that it was noticed the mug he was drinking out of on the early morning Las Vegas time call bore the message: “Stay Calm, Drink Tea.”