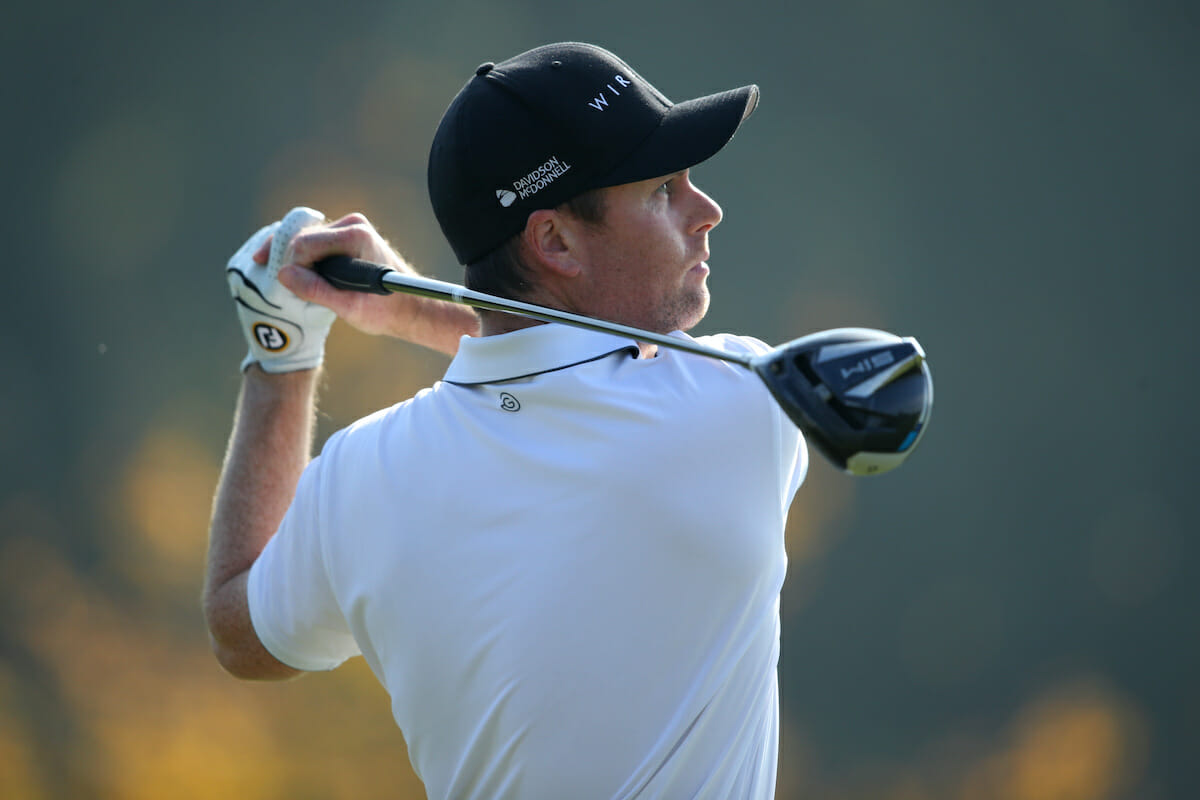 Jonathan Caldwell recovered from two bogeys to start his second round to post a two-under par 70 and move to within five shots of Lucas Bjerregaard lead at the halfway stage of the weather-disrupted Hero Open.

Clandeboye professional Caldwell ended a run of four straight missed cuts since his maiden Tour win with a 10-under 36-hole tally after carding a hard-fought five birdies on Friday. That led the way from an Irish perspective with Royal Dublin’s Niall Kearney carding three birdies in a bogey-free 69 to move into a tie for 34th at four-under while Gavin Moynihan made a much-needed cut on the number at minus-one after stumbling across the line with a 73.

Bjerregaard holds the halfway lead at a European Tour event for the first time in over three years after carding a 10-under par 62 with preferred lies in play on Friday.

The Dane, whose last victory was on Scottish soil at the 2018 Alfred Dunhill Links Championship, made the turn at Fairmont St Andrews in four-under par, and produced a blistering back nine which saw him card six consecutive birdies from the third to the eighth as he signed for a 15-under par total and a two-stroke lead.

“My putter might be the most valuable thing in Scotland right now,” said Bjerregaard, who holed just shy of 250-feet of putts on Friday. “I’ve never putted like that and I’m not sure I’ve seen anyone putt like that. That was pretty special, I’m a happy man right now.

“When I made the turn. I was four under and then hit a bad tee shot on one. Terrible second shot, not a good wedge shot in and holed that for par. Then I got to three, hit two good shots on the par five, just short of the green, hit a terrible chip shot and holed that and thought ‘this is going pretty good’. Then I had a terrible shot on eight and holed a 50-60 footer.

“I hit my irons well, but didn’t hit it well off the tee. I hit about three or four fairways. I guess I got lucky and missed in the correct spots and managed to hit some good iron shots out of there and putted well. It was definitely the putter. I think I had about 20 putts today – that helps.

“We’ve been very fortunate on our side of the draw. Conditions finishing up here were pretty good, not much wind and we saw the sun for a couple of holes. We’ve been very fortunate and the same story yesterday. I didn’t feel that comfortable yesterday, I played okay but I wasn’t thinking nine or ten under – you rarely are. That’s how the round progressed and I felt very confident. It seemed every time I lined the putter up I felt I could make it.”

Scotsman Calum Hill, who led after 18 holes, leads the home charge after carding a four-under par 68 to move to 13 under. He’s one stroke ahead of Santiago Tarrio of Spain and South Africa’s Justin Walters.
Walters carded an eight-under par round of 64, with Tarrio signing for a seven under 65. Tarrio is currently the leader on the Challenge Tour’s Road to Mallorca Rankings with two wins on the developmental circuit in 2021.

Nine groups completed their rounds on Saturday morning after a delay of three hours and 20 minutes due to the threat of lightning on Friday morning. Round three is set to start after 10.20am.