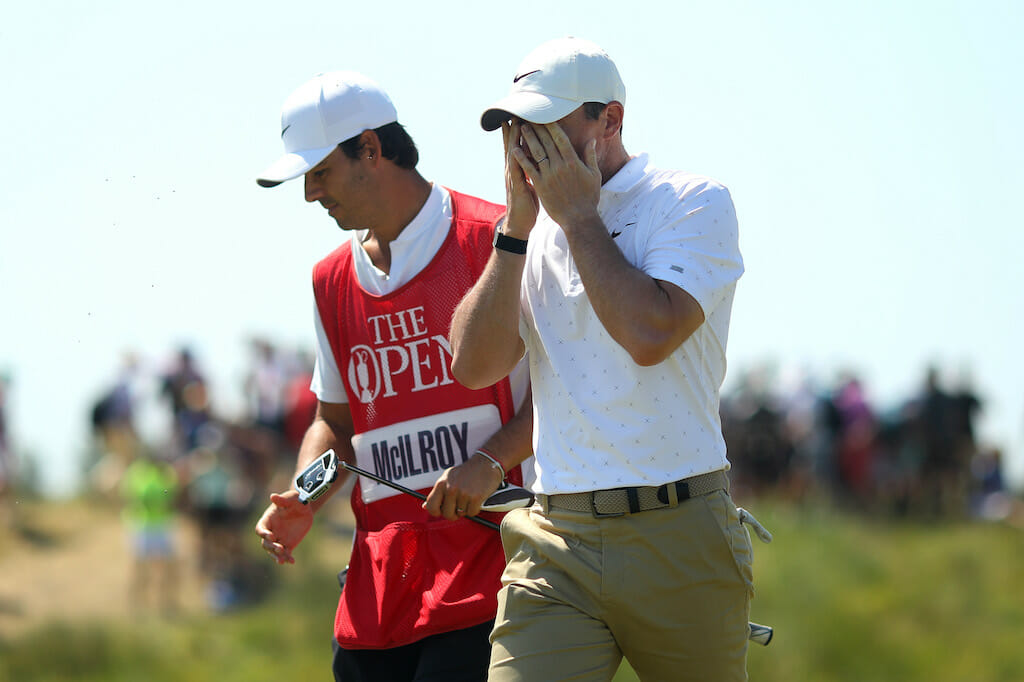 Rory McIlroy could not have stated it better in declaring ‘If you want someone to shoot even par all week, I am your man’.

It was tearing your hair out stuff watching McIlroy compete over the four rounds of the 149th Open Championship at Royal St. George’s. McIlroy grabbed 18 birdies but then it could easily have been 28 if so many other putts had dropped, as evident over his last few holes on day four including leaving a birdie right in the jaws on 14 and then seeing one stop on the ‘lip’ in posting a bogey on 16.

And speaking of bogeys, McIlroy had 15 bogeys and a pair of double-bogeys over the week ahead of a final round of a one-over par 71 to finish at one-over in total.

Mcllroy went into his 44th round of a 12th Open Championship at one-under-par and 11 shots adrift of Louis Oosthuizen, clearly looking to finish the last day of his Majors year on a high note. Though McIlroy had the start he didn’t want sandwiching a third hole birdie between bogeys on one and four. He then birdied the ninth but horribly doubled the 10th to be now two-over for his round. He got two shots back with birdies on 12 and 13 ahead of what unfolded on 16 before a closing pair of pars.

“For me at the minute it’s just the process of trying to work my way back to the sort of form and the sort of the level that I know I can play at,” he said.

“Obviously, I haven’t played at that for — not going to say all the majors. Felt like I was close at Torrey Pines. But it’s been one of those sort of I’m the best — if you want someone to shoot even par for you for a week I’m your man.

“That’s sort of — there was a lot of birdies in there but a lot of bogeys, too. I think it’s just more the bogey avoidance and the mental errors, because I’ve made 18 birdies this week, which is more than enough to challenge to win this golf tournament. It’s just that I make too many mistakes, and that’s the part that I need to try to get right.

“Whether that’s trying to be a little too aggressive from bad spots or putting myself in bad spots to begin with, but it’s just a matter of just trying to iron out the mistakes. There is enough good stuff in there to contend at these golf tournaments, but I’m just not allowing myself to do that with some of the mistakes I’m making.”

It was to his enormous credit that McIlroy tackled the media’s questions post his round as he tried to stay positive. Of course, there is still much to play for including next week’s (July 29th to August 1st) Olympic Games, the FedEx Cup Play-Off Series and then the Ryder Cup, as colleague Neil McLeman pointed out in speaking with McIlroy.

“I think so. You hit the nail on the head there. I need to look at the positives, and the positives are I made enough birdies this week to contend in the golf tournament,” McIlroy said.

“I could probably pick two or three things today that I made more bad decisions and mental errors. Hitting clubs that I was barely going to — it’s fine margins at the end of the day, and I just need to do a better job of when I do have those sort of in-between shots and when I have situations where it’s like, Okay, try to put this in the middle of the green and make par.

“I need to do a better job of just maybe being a little bit more disciplined out there. I think if I did that, I probably avoid a few of the bogeys that I made this week. Also, there are a few things to concentrate on before the Ryder Cup, FedExCup in the States is a huge goal of everyone’s. I guess that’s the real next big thing for me.

“Obviously the Olympics are in a week’s time. You know, I want to just try to get on a good stretch of golf. I’ve get probably four tournaments between now and the Ryder Cup, and I sort of just want to focus on them first before I turn my attention to that.”