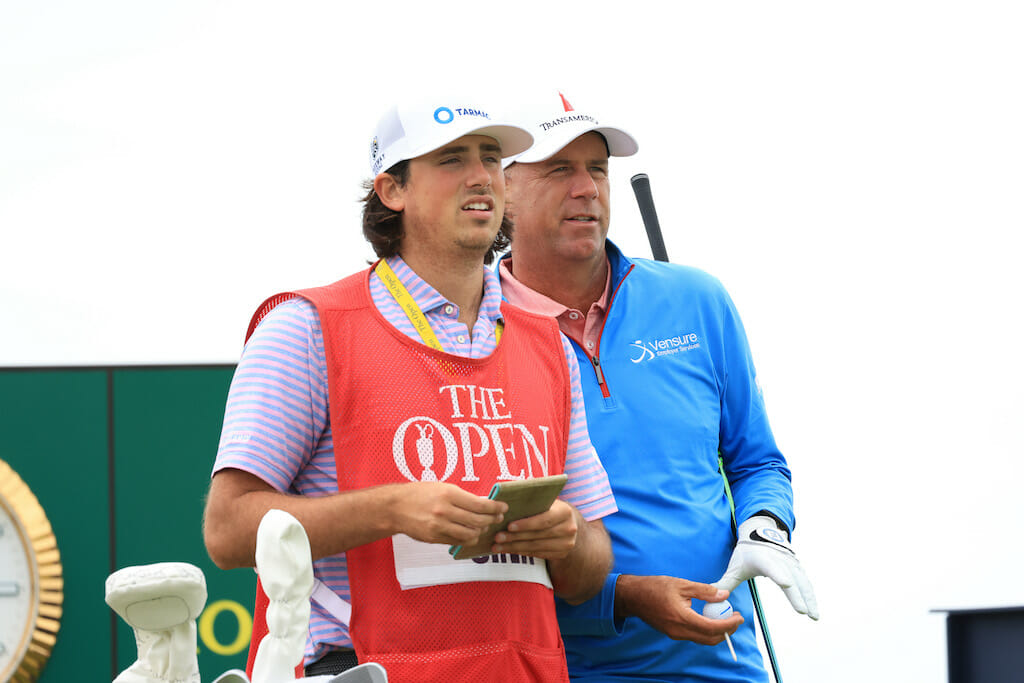 What is it about these near 50-year-old golfers making the game look downright easy? We saw Phil Mickelson brush all aside to win this year’s PGA Championship and now on day one at The Open, 47-year-old Stewart Cink muscled his way to a superb four-under par 66 on day one of the 149th Open Championship.

Cink’s round was his equal lowest in 22 Open appearances, brilliantly matching his opening 66 on route to victory in the 2009 Open at Turnberry. While we’ve been talking about Darren Clarke returning this week to Royal St. George’s a decade on from being handed the Claret Jug, this week is the 11th anniversary of Cink’s stunning play-off success on the Ailsa course in Ayrshire.

Cink, dressed in bright green, denied then 59-year-old Tom Watson from capturing a sixth Open Championship title and there with Cink was wife Lisa and their two sons, Connor and Reagan.The now 23-year-old Reagan is caddying for his father with the pair teaming superbly to capture last year’s Safeway Open and then in April this year, the duo endeared themselves to golf fans the world over in strolling together to a four-shot success at the RBC Heritage at Hilton Head for Cink’s eighth PGA Tour title.

This week is the family’s first visit to the opposite side of the Atlantic as father and caddying son, with Cink and Reagan combining also to produce a rare opening day bogey-free round.

“Today was what I would’ve hoped for for an opening round, for the most part,” said Cink. “I have my son Reagan. I have a pretty good game plan for this course, and we got to push that into operation today. It seemed like there were very few errors in that department out there and it was a pretty smooth round.

“So, I know I’ve been around these Opens enough that there will be a lot of challenges, and a lot of travails out there over the week. Today I mostly avoided them.”

Indeed, this week is Cink’s 22nd Open appearance since making his debut in the 1998 Open at Royal Birkdale, missing just one in 2016 at Royal Troon. And Cink’s 66 matches his lowest score in 73 rounds of The Open after he shot a similar 66 eleven years ago on route on Scotland’s west coast.

“I hesitate to use the old adage about winning the tournament on Thursday, but it’s kind of true,” he said.

“You want to be in it. You want to get a good feel for the course. Few surprises in the first round, and just do the best you can. I executed pretty well and I’ve got a good solid executing plan for the rest of the week, and so I think that between Reagan and I we are doing a pretty good job.

“And mostly this whole year, but doing a pretty good job piecing the shots together and figuring out the strategy on each shot and not making a lot of errors in that department. So that’s a big part of links golf, is to do the right guesswork”.

Cink had warmed-up for his 2009 success a week earlier by playing practice rounds at Lahinch and he was reminded of that following his round when asked if he repeated last week what he had done 11-years ago.

“Sadly, no. I haven’t been back for a few years, but I do love the area around Lahinch,” he said. “I still say Lahinch is my favourite opening nine holes anywhere in the world. I love playing the first nine, and hopefully I’ll get back soon. Didn’t make it this year.”