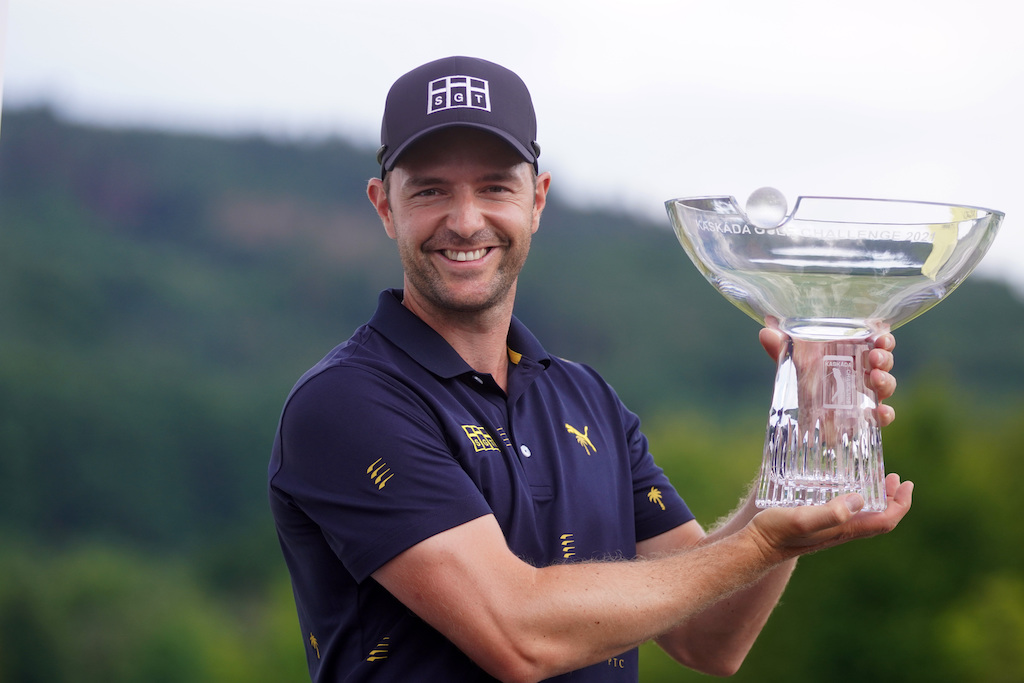 Marcel Schneider birdied the last three holes to secure a one-stroke victory at the Kaskáda Golf Challenge, and with it a coveted spot in The 149th Open Championship.

The German looked to have slipped out of contention after a double bogey at the par five 15th hole at Kaskáda Golf Resort, but he bounced back incredibly to post a four under par round of 67 for a 16 under par total, one stroke clear of New Zealander Josh Geary, Australian Dimitrios Papadatos and Italy’s Lorenzo Scalise.

The 31-year-old, who finished second on the Road to Mallorca Rankings in 2020, was overjoyed at securing his second European Challenge Tour title in such stunning fashion.

“At the moment, it feels great,” he said. “I have to say, with the way I finished, it feels even more special now. I’m super happy.

“I made birdie on 14 and then there was the par five coming up so just hit a good drive it was right in the middle of the fairway, and from then on I don’t know what happened.

“I hit a purely bad shot to the right and lost the ball, made double bogey and my thoughts were, before I saw the leaderboard, ‘that’s it, I’ve got no more chances to bring it back home’. Then I saw the leaderboard and I was just one shot back because Dimi birdied 15 so I knew there was a small chance of birdieing the last three. I tried to do it and I did.”

Schneider will now make his Major Championship debut at Royal St George’s after securing the additional qualifying spot offered by The R&A for the leading non-exempt player at the Kaskáda Golf Challenge.

“I heard about The Open spot on Friday during the round, I hadn’t thought about that before,” he said. “It feels even more superb now. It means a lot. I’ve not had chance to play in it before and I will definitely enjoy it and I’m already looking forward to it.”

Four-time European Tour winner Marcel Siem finished fifth on 14 under par, while Norwegian Espen Kofstad’s six under par round of 65 was enough to secure sixth place. Paul Peterson of the United States and Denmark’s Nicolai Kristensen shared seventh place on 12 under par, while six players finished in a tie for ninth place including 54-hole co-leaders Bradley Neil and Kristian Krogh Johannessen, who both posted closing one over par rounds of 72.

With his victory, Schneider jumps straight to 18th place on the Road to Mallorca Rankings following his first event of the season. Spain’s Santiago Tarrio still leads the Rankings on 98,598 points, with Frenchman Julien Brun and South African Wilco Nienaber occupying second and third place, respectively.

The Road to Mallorca now visits France for the second time this season, with Le Vaudreuil Golf Challenge taking place from July 8-11.