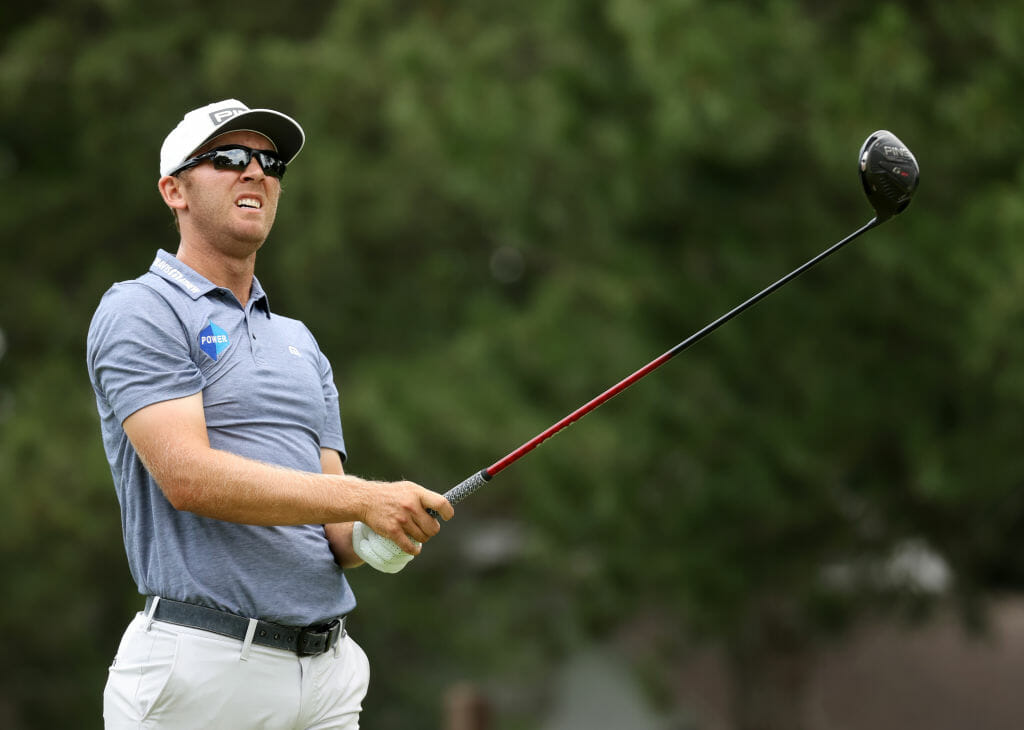 Seamus Power plays his shot from the fourth tee during the third round of the Rocket Mortgage Classic on July 03, 2021 at the Detroit Golf Club (Photo by Gregory Shamus/Getty Images)

Seamus Power is staring at another hopeful top-10 finish heading to the final round of the Rocket Mortgage Classic in Detroit.

Power added a three-under par 69 to his opening two rounds of 66 and 71 to end the day sharing 12th place at 10-under par on the Detroit Golf Club course and finds himself just four shots off the pace being set by Troy Merritt and Joaquin Niemann on 14-under par.

Merritt had the distinction of claiming his first PGA Tour ace on the 219-yard 11th on his way to a third round 67 as he looks to secure his third PGA Tour title having last won at the 2018 Barbasol Championship.

Neimann meanwhile remained bogey-free through 54 holes to be tied at the top and the duo are closely followed by Hank Leboida and Cam Davis on 13-under with Brandon Hagy one shot further back before a six-way tie on -11 and then the group of three players which includes Seamus Power.

Power, for a second time in three rounds, did not drop a shot with his three birdies spread out over his opening 13 holes on golfs traditional ‘moving day’.

The Waterford golfer was pretty accurate off the tee in hitting 11 of 14 fairways while he managed to find 14 of 18 greens in regulation, including all greens on his inward nine.

Once on the ‘dance floor’ Power posted just 28 putts.

Power arrived in ‘Motor City’ on the back of a T9th result early last month at the AT&T Bryon Nelson while he finished T19th in his most recent starts at the Palmetto Championship and last week’s Travelers Championship in Connecticut.

What Power desperately desires is a top-5 finish that would really lift his current 159th FedEx Cup standing.

He’s into next week’s John Deere Classic but with just 11 events remaining on this year’s PGA Tour 2020/21 wraparound schedule, Power is likely at this stage of getting a start in possibly five.

That does not include pulling on the Irish colours for a second straight Ireland Olympic Team appearance nor teeing-up in the WGC – FedEx St. Jude nor the closing three FedEx Cup ‘Play-Off’ events.

Power spoke following his opening Detroit round in identifying what is good about his game at present.

“At the moment I’m hitting my irons really nicely, which is good,” he said/

“I was for a while trying to hit both shapes and do all this stuff, but now I’m just trying to hit my irons pretty straight, just kind of suits my eyes a lot better, I kind of see things in straight lines in terms of golf.

“So, I’m just trying to — again, even something simple like that, just kind of makes — what makes sense to other people, I don’t know, but in my head it makes a bit more sense just to pick a line and try to hit it straight at that spot”.