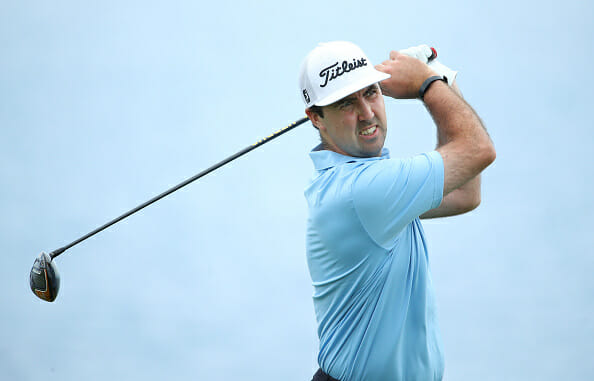 Dubliner Niall Kearney was making the most of his late entry when heavy rain halted play on the opening day of the BMW International Open in Munich.

Kearney had not dropped a shot in snatching six birdies, including three in succession from the 13th hole to move into fifth place at six-under par on the Munich Golf Club course.

The 32nd edition of the prestigious German event was hit by heavy rain, firstly saturating the course overnight ahead of play and then halting play late afternoon on day one.

Nealy 60 players in the 157-player field failed to complete their opening round including Kearney, who has two holes to play.

Aussie Wade Ormsby birdied five of his closing seven holes to be the clubhouse leader in signing for seven-under par 65.

Ormsby, 41, is a previous double Hong Kong Open winner and looking for a breakthrough win in Europe though the Aussie will be looking forward to some decent shut eye after jetting in from the States following a T40th finish in last week’s maiden US Open appearance.

“I was definitely upside down yesterday, and on top of that I got just a few hours of sleep last night,” he said.

“So, I feel much better today but yesterday I thought I was going to be in trouble for the week but somehow it sorted itself out”.

Three others, including England’s Sam Horsfield, had moved to seven-under with holes to play while double BMW International Open winner, Pablo Larrazabal is already well-placed in posting a 66.

Kearney had been second reserve up to late last weekend before getting the call-up from the Tour he was into the German field.

And the Royal Dublin ace made the most of the ‘preferred lie’ conditions and is now left with just a par-5 to complete his round early Friday morning before heading straight into round two.

Caldwell, on his first start since winning the Scandinavian Mixed, capped his round with a fifth hole birdie and then a sixth hole eagle ‘3’ though took a little of the gloss off his round with a pair of closing bogeys.