Rahm and Thomas to tee-up in Scottish showpiece 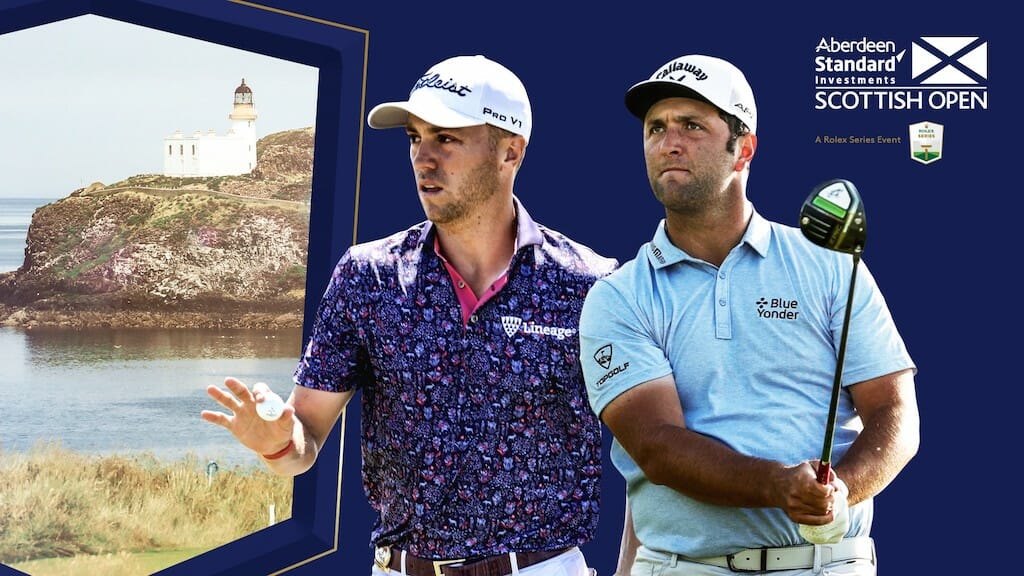 Two of global golf’s biggest stars are set to light up the Aberdeen Standard Investments Scottish Open with Justin Thomas and Jon Rahm – the current World Number Two and Three – confirming their participation in the second Rolex Series event of the 2021 Race to Dubai.

The two former World Number One players bring further star power to an impressive field gathering at the Renaissance Club on July 8-11, 2021 and fans can book their places to take in the action now, with a strictly limited number of tickets currently on general sale HERE

Rahm was crowned European Number One in 2019 as the swashbuckling Spaniard continued to impress on the world stage, and the 26-year old will go in search of a fifth Rolex Series title when he makes his debut in Scotland’s national open this summer. What that means for Irish Open organisers, only time will tell but the two-time Champion Rahm would be unlikely to play three weeks in a row with the Open on the week after the Scottish.

Major winner Thomas returns to the Renaissance Club after recording a top ten finish on his 2019 debut in the Aberdeen Standard Investments Scottish Open. The 28 year old former World Number One is returning to where it all began, after making his first start as a professional in Scotland, the Home of Golf at the 2013 Alfred Dunhill Links Championship.

Rahm and Thomas join fellow World Top Ten stars Tyrrell Hatton, Collin Morikawa and Xander Schauffele in East Lothian as the tournament once again takes its place in the week before The Open at Royal St George’s. Rahm will attempt to become the only the second Spaniard to win the Aberdeen Standard Investments Scottish Open title since the formation of the European Tour in 1972, after Rafa Cabrera Bello in 2017, while Thomas will look to follow in the footsteps of four fellow American winners – Michael Allen (1989), Tom Lehman (1997), Phil Mickelson (2013) and Rickie Fowler (2015).

European Ryder Cup star Rahm, whose six European Tour victories include four on the Rolex Series at the 2017 and 2019 Dubai Duty Free Irish Open and the season-ending DP World Tour Championship, Dubai in the same seasons, said: “I’m looking forward to teeing it up at the Aberdeen Standard Investments Scottish Open for the first time.

“I always enjoy playing in Rolex Series events, and I’ve had success in them in the past few years, so it will be pretty cool to try to add another title in Scotland this summer ahead of The Open.”

Thomas’ impressive CV includes the 2017 US PGA Championship and two World Golf Championship titles and, like Rahm, the American’s impressive form in recent years led to a Ryder Cup debut at Le Golf National in 2018.

He said: “I can’t wait to get back to Scotland and the Renaissance Club. I have a lot of good memories of playing in Scotland and it would be an awesome place to win a first Rolex Series title. I’ve said before it’s a goal of mine to win on different tours and in different countries, and I would love to be successful when I come back to the Aberdeen Standard Investments Scottish Open in July.”

Tickets are priced at £10 for juniors (14-18 years), £30 for concessions and £35 for adults, with under 13s going free. Tickets must be purchased in advance and will not be available on site during the tournament.

A percentage of the tickets available for the Aberdeen Standard Investments Scottish Open will be donated to key frontline workers in recognition of their dedicated work throughout the pandemic. The only official sales channel to purchase tickets for the 2021 Aberdeen Standard Investments Scottish Open is via the ticketing platform Eventbrite. The resale of tickets on unofficial platforms contravenes the European Tour’s ticket terms and conditions and such sales render the ticket void.