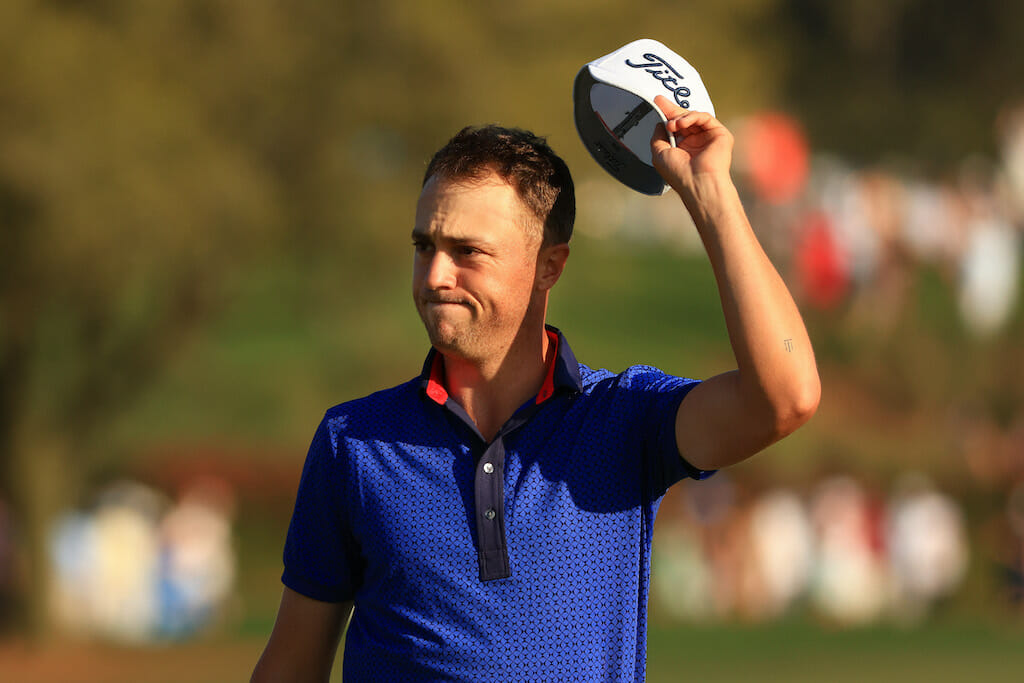 Justin Thomas insists it was never his intention for footage to go public of him handing a cheque to PGA Tour hopeful Mike Visacki, despite the extra publicity actually proving beneficial to the mini-tour man’s dreams.

JT admits the original reaction video of Visacki breaking down in tears on the phone to his Dad after Monday qualifying for the Valspar struck a chord with the world number two who felt compelled to help the struggling pro. And although Thomas wanted to keep his donation private, no doubt fearing Player Impact Programme accusations from a cynical few, the air-time the video has since received has only further helped Visacki’s cause, Thomas revealed.

While “Big Mike” Visacki has fought to make ends meet all his life, he has never given up his dream of playing pro golf.

On Sunday, Justin Thomas cut a check out of his own pocket so Visacki could continue to pursue his career.

“I was a little irritated that it got out,” Thomas said first ahead of this week’s Memorial at Muirfield Village. “I didn’t really want it to. That wasn’t the intention of it.

“I just saw the video of Mike calling his dad after he Mondayed [qualified] in Valspar, and in a day and age where it seems like only anything in the media is negative and not good these days, I just felt it was so refreshing and great to see and how genuine his excitement and emotions were.

“I mean, I don’t know Mike. I didn’t know him. I met him at Valspar but for some reason it hit home to me and it just was like, man, you know, this is a dude who’s been grinding for a long time and there’s a lot of people, not just him, that are doing that, but I just wanted to help in a little way and what I’m most happy about is the recognition he has got and I heard that someone on the board – I don’t know if it’s true or not – of Charles Schwab heard about what I did and then wanted to sponsor him and take care of him and his expenses and everything throughout the rest of the year or however long it is. And that’s what I’m most happy about.”

One of the most popular and genuine players on Tour, Thomas has suffered his fair share of media scrutiny this past year and there’ll be those who say this gesture is nothing more than a PR stunt to repair a damaged reputation.

However, followers of Thomas know better than that. For one of the biggest stars in the game, he’s as grounded as they come and whatever about the boost Visacki enjoyed receiving the donation, Thomas admits seeing Mike’s reaction brought him some much-needed joy after a spell of his own struggles on the fairways of late.

“I think it was the gesture, because he didn’t even look at it and it’s, it wasn’t anything, not anything crazy. I mean, it was just, I just wanted to help,” he said. “I don’t care if it’s a thousand dollars, like, that’s extremely helpful for someone who is in that position and that’s what I wanted to do. I wanted to be just, like, hey, man, I know Q-School’s expensive, I know playing in these events are expensive, and like any little way I can help out, I want to.

“And I want to be helpful more than just money. I’m like, dude, any time you — he lives in Florida and we were going to play some golf together, but I just was like, hey, dude, if you ever want advice, if you ever want to pick my brain, you ever just want to talk, I’m here for you. I’m happy to help.

“I was very fortunate to have some great mentors and people willing to help me growing up and if it’s a difference of him playing on mini tours or getting his Korn Ferry card the next year, then, like that’s, that means more to me than any amount of money I could ever give him or anybody.

“It just kind of totally made me forget about what’s going on in my golfing life and sometimes puts things in perspective that obviously we’re all out here to play golf and we’re all out here to try to win a lot of golf tournaments, but changing people’s lives and helping people who are less fortunate than you is sometimes, you know, more important than that.”