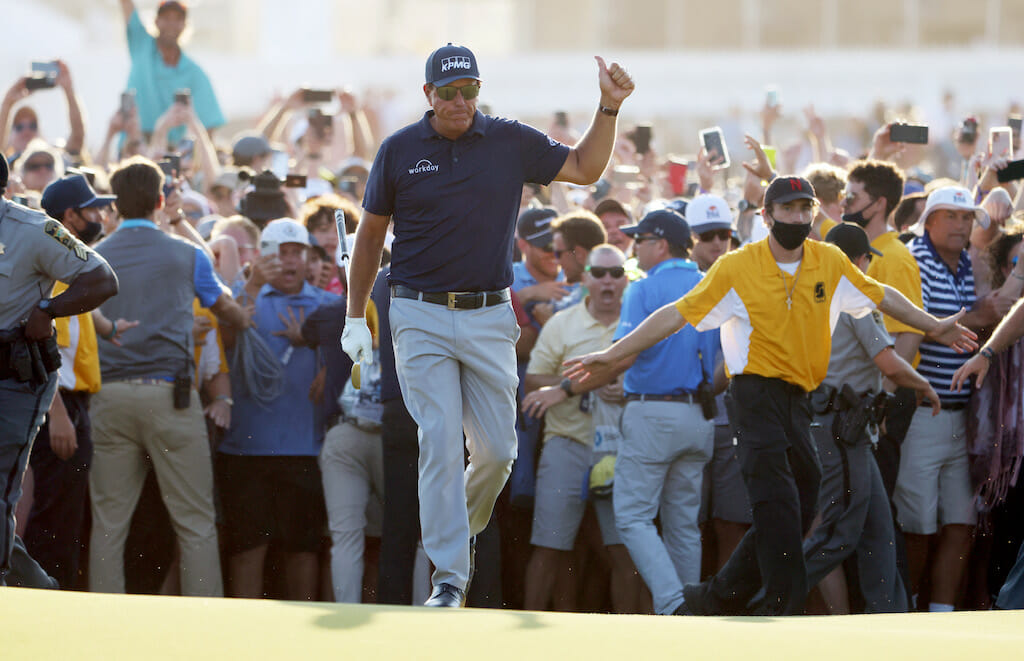 There’s the old saying that the sight of one swallow does not make a summer. Well newly-crowned PGA Champion Phil Mickelson has provided a Ryder Cup equivalent stating ‘one good week in an entire year doesn’t warrant a spot on a Ryder Cup team’.

Mickelson is a veteran on an impressive unbroken run of 12 USA team appearances between 1995 and 2018 but only three of those on a winning side. His historic victory last Sunday at the PGA Championship has seen Mickelson jump 36 places to be now ranked 16th on the USA Team standings with team captain, Steve Stricker taking the leading six off the points table and then selecting six Whistling Straits ‘wildcard’ picks.

Mickelson was asked about qualifying for the team ahead of this week’s Charles Schwab Challenge at Fort Worth in Texas.

“So I have not been a thought let alone even in the discussion for The Ryder Cup, but in my heart, I always felt if I played and could put it together on the regular tour and play well that I might be able to move up and give myself an opportunity,”  he said.

“Now if I’m the captain, I’m not going to want a guy that plays well one week in an entire year. And so just because I played really well last week and won a big championship, that does not warrant a spot on the team by any means but I now at least have an opportunity over the course of the next three months to be at a high level consistently and maybe be in a position to add something to the team.

“If not, we have such a good group of young players, I don’t want to disrupt that, either. You know, we have a lot of talented players, and I’ve had 25 years now of playing, so it may be time to step aside and let these young guys take over, and certainly they are playing well enough and to do it and to represent the United States incredibly well.

“But for me personally, if I could add to the team and not be a hindrance or a distraction, I would obviously love to be a part of it because they are such special events, and I would love to be able to play for Captain Stricker.

“But all I have now is an opportunity to show consistency over the next three months, because one event is not — that’s not the guy you want that plays well one week. You want to know what you’re getting, and if I can do that consistently now for the next three months, then I might be able to really add something to the team. But if not, it’s time for the young guys to take over and run with it because they are so talented.”

A big call from Mickelson but if he doesn’t qualify automatically, how could Stricker not overlook him as a ‘wildcard’ pick? And even at 51-years of age, his enormous wealth of experience stretching already 23-years, along with Mickelson’s presence alone at Whistling Straits surely would be enough in terms of team morale boosting.