No separating Lowry and Harrington after three rounds at Kiawah 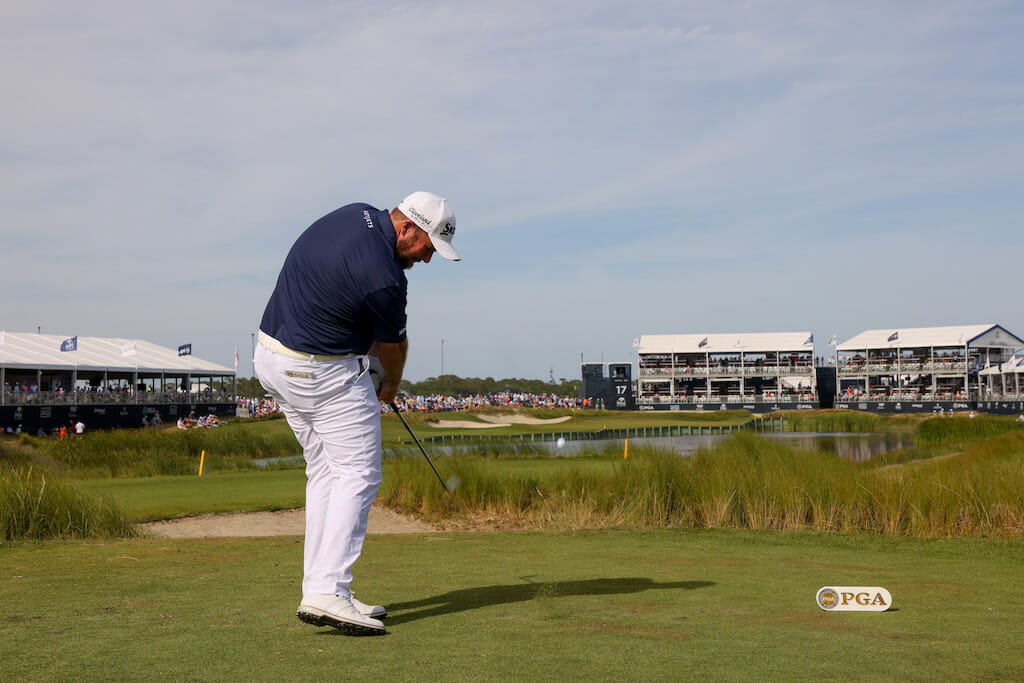 There was no separating Padraig Harrington and Shane Lowry after three rounds of the PGA Championship at Kiawah Island.

They teed-up on day three a group apart but four hours later they each had posted a one-over par 73, that included two birdies and three bogeys each, to be sharing 24th place at one-over par.

Harrington, teeing-up this week in a 21st PGA Championship, birdied his second but dropped shots at the third and fifth holes ahead of dropping a shot at 15 before holing a 16-footer for birdie on 16.

“I showed some nice form the first two rounds and I should have been a lot better after two rounds,” he said. “I didn’t play as well today but worked it around there to shoot one-over par, which was a good return for the way I played.

“Hopefully tomorrow I’ll come out and my head will be in a better place that I make a few more birdies, and we’ll see how we can do.”

Lowry was one-over after 13 holes following a bogey at the eighth but then slumped to three-over following bogeys on 14 and 15. The Open Champion regrouped superbly with birdies on both 16 and 17.  At the par-4 16th, Lowry found a greenside waste bunker with his second and brilliantly splashed out from some 20-yards to land his third just two feet from the flag.

Then on the hardest hole of the course, the par-3 17th, Lowry landed his tee shot to just four-feet for a superb birdie.

“I’m frustrated, I’m disappointed because I feel like I had a round in me today, especially where I drove the ball to,” said Lowry. “I feel like there’s a good score out there. I think I only missed a couple of fairways, and yeah, it’s disappointing. I finished strong. I kept battling. It was nice to birdie 16 and 17.

“But yeah, I live to fight another day, try and go out and shoot a decent score tomorrow and have a good week. I can still sneak a top-10 out of it or a top-5 or a good finish if I can shoot sort of 4- or 5-under tomorrow.”

And Lowry was asked his thoughts on dealing with predicted winds of 35 mph over the final round.

“Who knows. I think we do have a different wind tomorrow,” said Lowry. “I think the back nine is going to play downwind tomorrow, so I don’t know, but who knows. We just have to come out — I’ll get my tee time tonight and wake up in the morning and go play and see what it gives me. I’ll be able to adapt to whatever conditions it throws at us tomorrow.”

And if Lowry needed a boost, then perhaps he got it when seeing that final round tee time is alongside his great friend, Harrington. The pair will tee off at 5pm Irish time and will hope to post a low number that will stand to them as conditions worsen through the afternoon.

Both Lowry and Harrington trail 54-hole leader Phil Mickelson by eight strokes with the five-time Major winning American in position at seven-under par after a third round two-under 70. Mickelson leads Brooks Koepka by a single stroke and the 50-year old, when asked to detail the theatre of his third round, gave an indication of his focus this week in South Carolina when struggling to do so.

“I don’t know if I’m really — if I really could right now because I’m more focused on a few things that I need to work on tonight before tomorrow’s round, and I’m not really dwelling back on what took place today,” Mickelson said. “I just know I’m having a lot of fun and I’m very appreciative of the way the people have been supportive.”

As for Koepka, who sits within one shot of Mickelson after a 70 of his own, it was just another day at the office: “It just feels good, feels normal. It’s what you’re supposed to do, what you practice for. I’m right where I want to be, and we’ll see how tomorrow goes. Just be within any within three of the lead going into the back nine and you’ve got a chance.”

South African Louis Oosthuizen is in third play at five-under, one clear of Kevin Streelman and two clear of compatriots Christiaan Bezuidenhout and Branden Grace.