Mickelson: Excuse me! Can you move your drone? 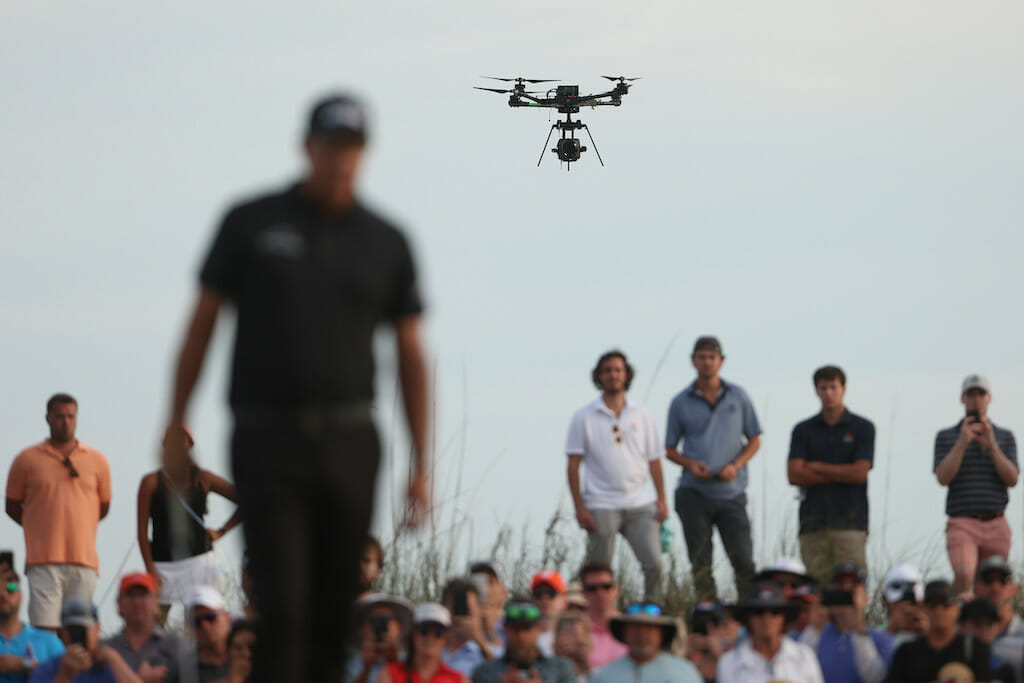 A drone flies near the 18th green as Phil Mickelson prepares to putt. (Photo by Patrick Smith/Getty Images)

Phil Mickelson may be on his way to a historic PGA Championship triumph but he was leaving nothing to chance while also creating history early on day three at Kiawah Island.

Mickelson had chosen a 6-iron and was about to play his second shot at the par-4 fourth hole when he spotted a drone high in the South Carolina sky. The drone was not making a noise as it was well in the distance as he prepared to play a shot of 178-yards into a 12mph wind.

But bizarrely, the drone was in Mickelson’s line of sight and he wanted it moved, and the near 51-year old wasn’t going to hit until the offending drone was out of sight.

“Can we move that drone from my flight?” Mickelson could be overheard saying.

Firstly, who do you contact to have the drone moved?  And if it was not an authorised CBS TV drone, who then do you speak to?

Mickelson could again be heard saying: “Can you radio to the TV guys to move the drone out of my shot? Not only is it annoying, but I’m going to hit it.”

A message got through to the drone operator with Mickelson missing the green to find a back bunker but then superbly landing his third shot to seven feet and saving par. Not sure if the drone captured the par save but Phil won’t care after posting a third round 70 to take the lead into the final day on the Ocean Course. Mickelson tops the board at seven-under par, one clear of four-time Major winner Brooks Koepka.

I think that because I feel or believe that I’m playing really well and I have an opportunity to contend for a major championship on Sunday and I’m having so much fun that it’s easier to stay in the present and not get ahead of myself,” Mickelson said.

“And so I think that’s a big part of it. I think certainly my brother has played a big part in kind of keeping me present and in the moment and not letting a couple of bad swings affect me here or there, and so I think we’re having so much fun that it’s easy to stay present.”