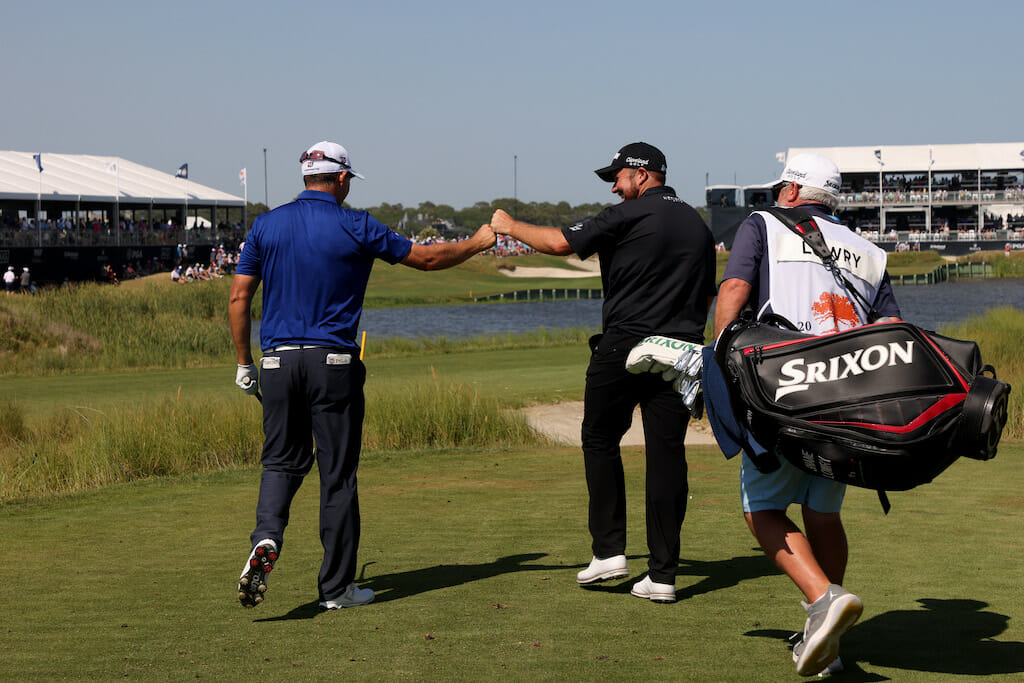 Padraig Harrington laughed off any suggestions of teeing-up later this year at the Ryder Cup following a best finish in the majors in eight years.

Harrington, 49, brilliantly rolled back the years to post a final round 69, a score matched by playing partner and countryman Shane Lowry to be then tied for clubhouse lead but technically sharing fourth place at the 103rd PGA Championship at Kiawah Island.

The fellow Open Champions began the last round at one-over par and after the closing 18 holes could not be separated with two-under par totals on the Ocean Course. The effort, in Harrington’s 21st PGA Championship, is a best finish at the game’s highest level since a share of fourth at the 2012 US Open and while the Dubliner is set to earn a large serving of European Ryder Cup points, his Wilson golf bag will not be travelling to Whistling Straits.

“I’m well past that time and too long in the tooth now at this stage, sweating through five rounds of golf and all that goes with playing in a Ryder Cup,” said Harrington, who had the added bonus of booking his place in the 2022 Masters.

“I’m very much dedicated to being the captain. I’m letting other people have their time. I had mine. And you can’t do both. Nobody’s ever going to be a Ryder Cup Captain and a player at the same time.

“It’s a full-time job being The Ryder Cup captain. There’s no doubt about it, and even in my situation trying to play some golf, you know, I have to manage it very well because it is, it has become a full-time job and when you get to the tournaments, even more so. There’s a lot going on.”

Harrington headed into the final round with Lowry at one-over par with Harrington stealing a brilliant march of his fellow Open Champion and soaring in holing an eight-footer for an eagle ‘3’ at the par-5 second. It put Harrington three clear of Lowry who had bogeyed the first. Each birdied the third but Harrington then dropped shots at four and five while Lowry was on a bizarre six holes of bogey, birdie, birdie, bogey, birdie and a sixth hole bogey.

Harrington regrouped with birdies on seven and nine with the pair making the turn with Harrington two clear of Lowry. It was Lowry who ‘won’ the inward half with birdies on 12 and 16 while Harrington birdied 14 but dropped a shot on 15 before the Irish duo parred the closing two holes. And Harrington spoke of his delight in being grouped with his ‘good friend’.

“That was” probably my most enjoyable round of golf I’ve had on the golf course in a long time,” said Harrington. “It’s amazing when you play with a friend, it definitely helped both of us relax and just play golf and both of us played really well. We both could have been quite a few shots better.”

Lowry’s effort was easily a best finish in his five majors since winning in July, 2019 at Royal Portrush with the result, in the company of Europe’s captain, doing wonders for the Clara golfers Ryder Cup selection cause.

“I’m in the position I’m in and this is another good week towards Ryder Cup selection,” he said. “It’s always good to play well in front of Padraig and under the gun because I play a lot of golf with him, practice rounds, but for him to see me in competition was pretty nice, as well.

“So yeah, look, I’ve got a lot of golf to play between now and then. Like I said a few weeks ago, there’s another two major champions to be crowned the rest of this year.

“We’ve got a lot of big tournaments, a lot of good golf to play, and hopefully I can make that team, and like I always say, I don’t just want to make the team, I want to go to Whistling Straits and I want to win the trophy. That’s where my head is at this year, and I feel like I’d be a great part of the team if I do manage to get on it.”

And remarkably, Lowry’s Kiawah effort is his third top-10 finish this year on Pete Dye designed golf courses having finished eighth the Players on the TPC Sawgrass course and ninth more-recently at the RBC Heritage at Harbour Town Links.