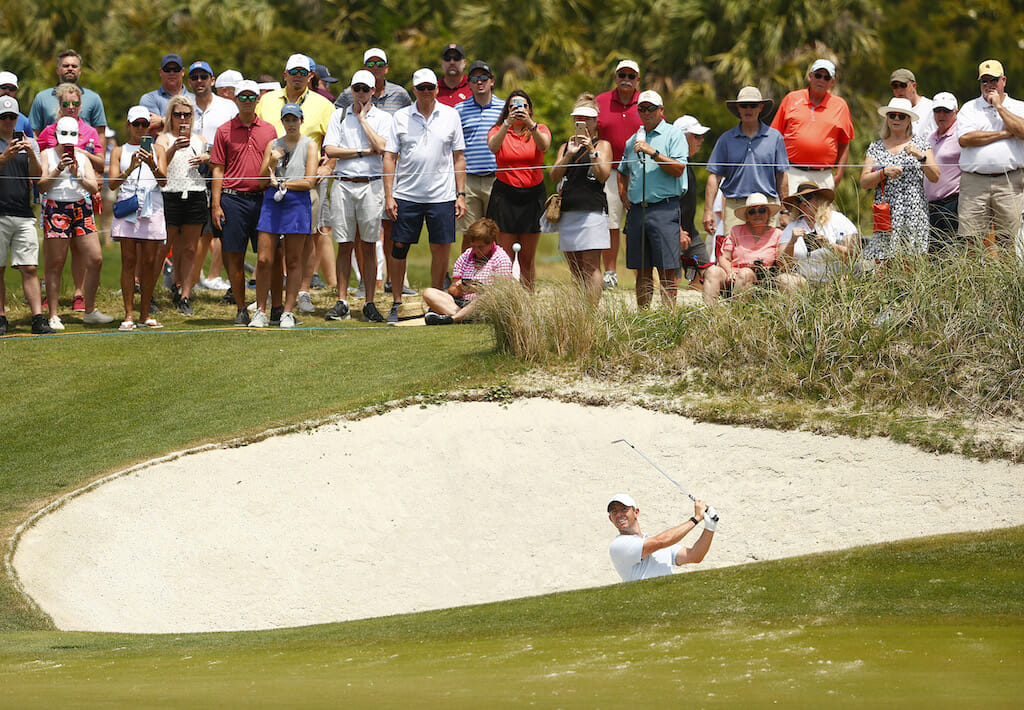 Rory McIlroy had spoken of the ‘swagger’ that the golf world has missed in capturing the recent Wells Fargo Championship and how even a small attendance of spectators helped lift his spirits.

It’s only in recent weeks on the PGA Tour the crowd noise, or ‘swagger’, that McIlroy calls it, has started to return to golf’s biggest stage. The comparison was there for all to see at last week’s BetFred British Masters when played over ‘dreich’ conditions, as my Scottish friends would say, and with no spectators at all.

If it had not been for the emotional scenes on the final green in seeing Richard Bland end a 478th winless drought, it would have gone down as one of the most lifeless tournaments in recent times. McIlroy found himself being asked about his Quail Hollow comments and spoke of watching the recent Champions League semi-finals played in front of empty grandstands.

“Yeah, it’s funny, ever since I was 16-years old, I’ve had thousands of people watch me play golf pretty much every time I teed it up,” he said. “Even going back to amateur golf and — so then not having that, playing in that environment for 14, 15 years and then sort of going the complete opposite, it’s just different.

“Yeah, I said at the time it was like playing practice rounds. It’s easy to lose concentration. Everyone is used to a certain environment, whether you work or whatever you do, and it’s a bit — I watched the Champions League semi-finals a couple weeks ago and those guys play in that for the first time in their careers and they’re playing in an empty stadium. I mean, that just must be terrible. That’s not at all how you dream of being in a squad like that and playing in a massive game.

“You want to play in front of people and you want to feel that atmosphere. It’s unfortunate that in these times a lot of people don’t have that experience, but I am glad that we’re getting back to some sort of normalcy, and when you hit good shots and hole putts there are claps and rewards and encouragement. I feel like that’s all a part of tournament golf and competitive sports at the highest level, and I’m just happy that it’s starting to come back.”

Even the mashed potato guys?

“Yeah, love the mashed potatoes guys again. I don’t even care about the stupid comments. I’m just glad that everyone is back here!”

And while McIlroy is now warming to the return of the crowds, at least in the U.S., he again singled out an individual for special praise. No, not his ‘caddie’ but his best-friend, Harry Diamond who proved instrumental in McIlroy ending his near 19-month winless drought in suburban Charlotte.

“This was supposed to be a short-term thing back in 2017, and I ended up really enjoying it, really liking it, and we made the decision that this was going to be a long-term thing, and it’s worked out great. We’ve had six wins together.

“I think the reason I wanted to single Harry out, as well, I feel like he gets some negativity around the relationship that’s very unfair, uncalled for. People don’t know him, don’t really know me. They sort of see things from the outside and from their own perspective, but they don’t really know.

“I wanted to make a point that Harry was 100 percent the person that told me not to hit that ball on 18 in the creek, and if it wasn’t for him, I probably would have lost the tournament because I’d still probably be trying to hack it out of there. I’m like a dog, if I see a golf ball, I want to hit it. It’s there. Or if someone puts a football in front of me, I want to kick it. I saw the ball, I wanted to hit it.

“He’s like, let’s just think about this. That was the reason I wanted to single it out, because he kept a cool head when maybe I wasn’t in the best place. And yeah, because of that unfair criticism that I think he’s gotten over the last couple years, I wanted to just make a point of, we know what we’re doing out there.”

As for the source of the criticism of Diamond?

“I mean, you’d have to ask the people that are criticising, I think. But it certainly comes from a place of me being his friend of wanting to stick up for him because I know all the criticism is unfair.”