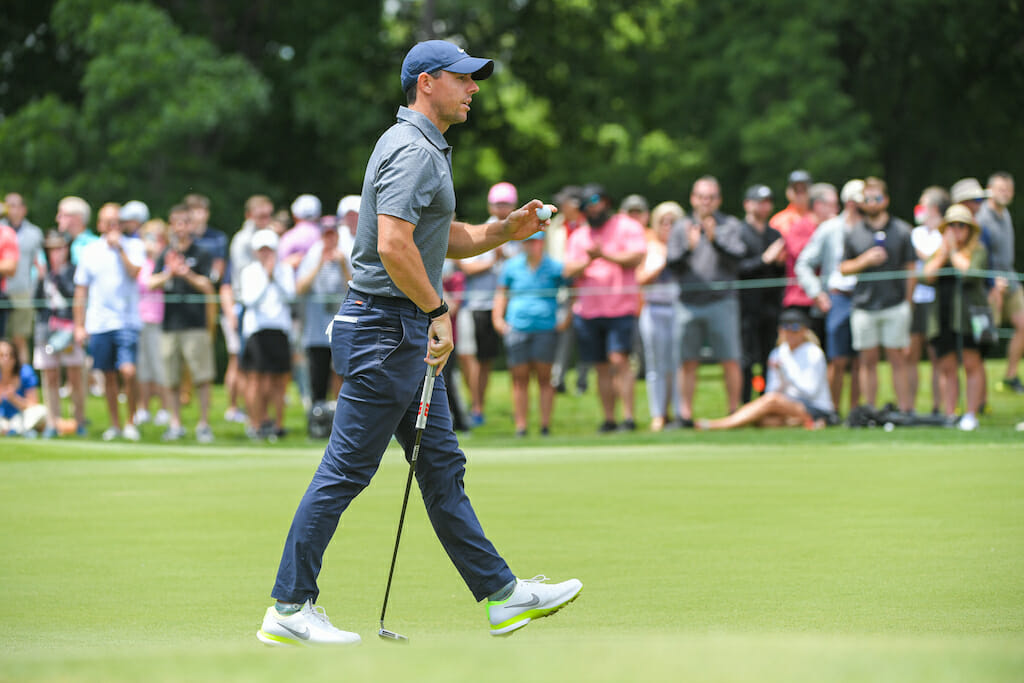 Rory McIlroy has ended a relatively dismal run of two missed cuts with a fighting 66 to be just two shots off the lead at the halfway stage of the Wells Fargo Championship in North Carolina.

McIlroy grabbed six birdies and dropped just one shot to jump 68 places into a share of fifth place at four-under par in the €6.6m event on the Quail Hollow course.

The two-time former Wells Fargo champ muscled his way to the near the top hitting just five of 14 fairways having arrived in suburban Charlotte with the burden of missing the cut in both his last two events – The Players and the Masters. As such, McIlroy’s effort is a timely return to form just two weeks out from the PGA Championship.

“I only hit five fairways so there you go. Take that, traditionalists,” McIlroy said smiling. “It was just so much better. The one thing that I was really happy about coming in here this week was my iron play, felt like I really found something last week.

“Maybe I didn’t get a chance to show it yesterday because I wasn’t finding the fairway very much, but today, just having some more opportunities to hit good iron shots and give myself birdie chances, I was able to show it a bit today and it was nice. I played the par-3s well and hit some really good shots into the par-3s and that’s something that I haven’t been doing for the last few months, so that was nice.”

McIlroy commenced his round from the 10th and was soon into the red in holing a 15-inch birdie at the 14th and then sinking a seven-footer at the next.

He then holed a seven-footer at 17 and then made his way to five-under in draining a 20-footer at the first before a five-footer for birdie at the third ahead of his only bogey in three-putting the par-3 fourth hole or his 13th. McIlroy completed a good day’s work on a sound note in just missing the green at the short par-4 eighth hole, chipping to just under five-feet for the sixth birdie of his round.

And before heading to lunch, McIlroy revealed he recently had dinner with US Walker Cup Captain, Nathaniel Crosby who will lead out his USA team on Saturday looking to make it three wins in succession for the Stars and Stripes side.

“I had dinner with Nathaniel a couple Fridays ago,” McIlroy said, who played in the 2007 Walker Cup at Royal County Down ahead of turning pro. He also showed his support for Stuart Wilson’s GB&I team despite news of food poisoning spoiling the closing day of practice.

“I played Seminole with my dad last week and it was in really good condition,” said McIlroy. “Also, I heard a few of the boys are struggling with food poisoning at the minute, so hopefully they get over that.

“I think it’s a wonderful experience and even though we didn’t win back in ‘07, it was a great experience, it was great to be a part of. Seminole’s a pretty good place to play the Walker Cup.”

Meanwhile, the luck of the Irish saw Seamus Power and Shane Lowry through to the weekend, though the latter had a particularly anxious wait. Power bogeyed his closing hole in a 72 for a one-over tally but as conditions toughened, the West Waterford man actually rose two places up the board to a tie for 51st, only seven shots off the lead.

Lowry looked certain to be left lamenting a 15th hole double however in his 73 for a two-over 36-hole total. The projected cut mark was even par after Lowry had finished but the Clara man has been handed a lifeline with the top-64 and ties getting into the weekend at two-over.

Amazingly, that leaves both Lowry and Power right in the tournament with England’s Matt Wallace (67), former US Open champ Gary Woodland (69) and Patrick Rodgers (68) – setting the halfway pace at six-under par. It’s all to play for in Charlotte.