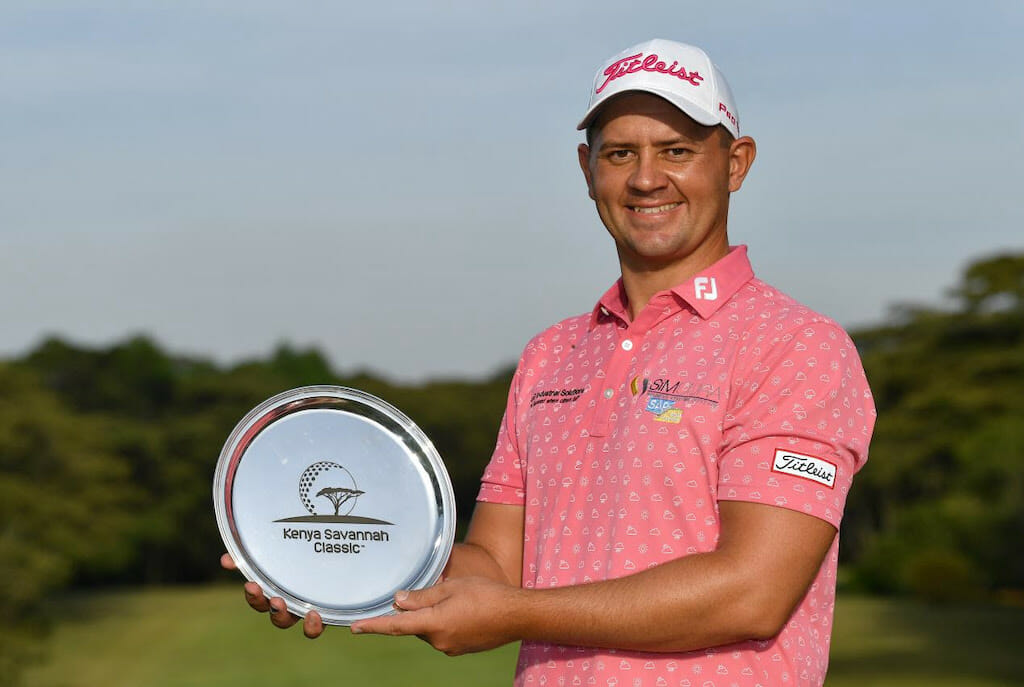 Cormac Sharvin and Jonathan Caldwell finished well off the leading pace as Daniel van Tonder secured his first European Tour title at the Kenya Savannah Classic supported by Absa after defeating Jazz Janewattananond with a birdie on the third play-off hole at Karen Country Club.

Ardglass professional Sharvin broke 70 for the second time this week with a two-under 69 but will be left wondering what might’ve been after failing to build on his flying 65 to start the week. In the end it was a share of 48th for the 28-year old at eight-under, one stroke clear of Clandeboye’s Caldwell who soured an otherwise encouraging week with a three-over 74 to finish at minus-7,

30-year-old South African van Tonder meanwhile posted a closing seven-under par round of 64 to join Thailand’s Janewattananond on 21-under par and after both players parred the first two trips back down the 18th hole, it was third time lucky for van Tonder as he converted his short birdie putt following a sublime approach.

He was eight under par after 13 holes following five gains in a row from the ninth hole, but back-to-back bogeys at the 14th and 15th handed the advantage to Janewattananond. He needed to find something special and he holed a lengthy birdie putt on the 18th to force extra holes.

The victory is van Tonder’s fifth in his last 13 worldwide starts, while Janewattananond secured his best European Tour finish since his tied second place at the 2017 Fiji International. England’s Sam Horsfield and Scotland’s Calum Hill both carded seven under par final rounds of 64 to share third place on 20 under par, while David Drysdale, of Scotland, and South Africa’s Jacques Kruyswijk finished two shots further back in a tie for fifth place on 18-under par.

“I’ve been working hard,” said van Tonder. “Last year I had four wins on the Sunshine Tour, my stroke average was quite low – then Covid happened and it made everything a bit hard travel-wise and getting in to tournaments. It wasn’t easy. I had to work hard and keep myself motivated. It paid off, so I’m very happy.

“I tried to keep it easy. It’s 18 holes, I needed to 18 tee shots and 18 second shots and try to make it as easy as possible. That was in my mind, just to hit fairways first then hit the second on the green and try and make the putt. The first nine went well and I started the second nine also very well. But I had the two bogeys in a row, two big fliers – I don’t know how – but luckily my wife is on the bag and she kept me calm and reminded me of a few things, and it worked.

“I’m a bit different. I love pressure, if there’s pressure I get more in the zone. For me, I tried to keep it as easy as possible – hit the fairway first, then the second, put the other player under pressure and see what happens from there. I took it shot-by-shot and it worked.