McDowell in the hunt at Corales Puntacana Championship 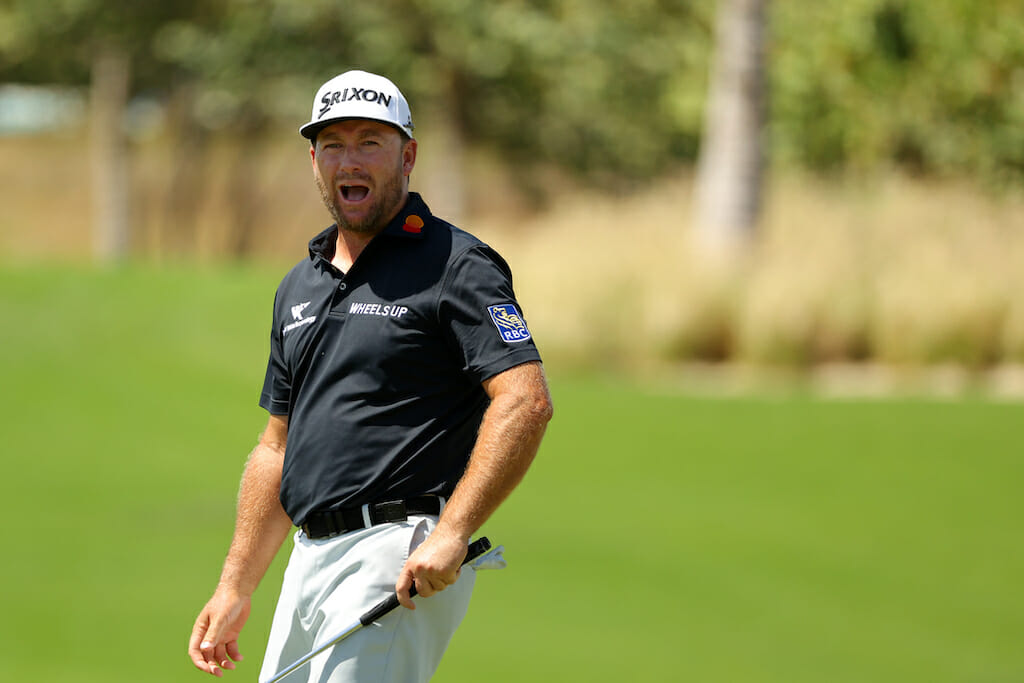 GMac reacts to his putt on the 15th green during the second round of the Corales Puntacana Resort (Photo by Kevin C. Cox/Getty Images)

2019 Champion Graeme McDowell fired a three-under par round of 69 in testing conditions to move within two strokes of the lead at the halfway stage of the Corales Puntacana Championship in the Dominican Republic.

The 41-year old, who last made a PGA Tour cut at November’s RSM Classic, enjoyed a chip-in eagle at the par-5 seventh and four birdies to cruise into the weekend rounds at five-under par.

“Yeah, listen, it was really important to get out here this morning and try post a score, get back in the tournament a little bit,” said McDowell. “The conditions were — I’m not sure I’ve played the golf course this tricky and this difficult. We know it can blow down here, but I think this wind direction’s specifically tricky on this golf course, especially those three finishing holes. But very pleasing. The chip-in at 7 was huge to keep me kind of in check and give me a chance to stay on the leaderboard.”

McDowell, who has been working with swing coach Lucas Wald in a bid to rediscover his Major winning swing, admits he recently hit the pause button with Wald having felt over-coached of late and his mission to take responsibility this week has turned his fortunes on their head.

“He’s a fantastic coach and a fantastic guy, I just feel like I’m maybe a little overcoached the last seven or eight months,” McDowell added. “If I’m being honest about it, I haven’t really done a good job on owning things myself and I felt like I just needed to take a step away from technique and start, like Pete Cowan always says to me, just controlling the ball flight. Especially on a week like this week in these wind speeds, the only thing you need to focus on is controlling flights and controlling spins.

“I think it’s been so hard to find form on the Florida Swing. Those three golf courses are probably some of the most punishing of the year. Struggling with my technique and my form, I was never going to find anything.

“It takes sometimes a golf course like this where it’s a bit more wide open off the tee and there are some chances out here. Like I say, the wind has helped me just focus on hitting shots rather than technique. Hopefully this can be the turning point of the season regardless of what happens this weekend, see if I can kick on, play some good golf and take some form away from this week.”

Joining McDowell in the weekend rounds are Seamus Power and Padraig Harrington – Power carded consecutive rounds of 72 to move into the weekend at even par, the same score as Harrington who could only add a 75 to his opening 69 to sit just outside the top-50.