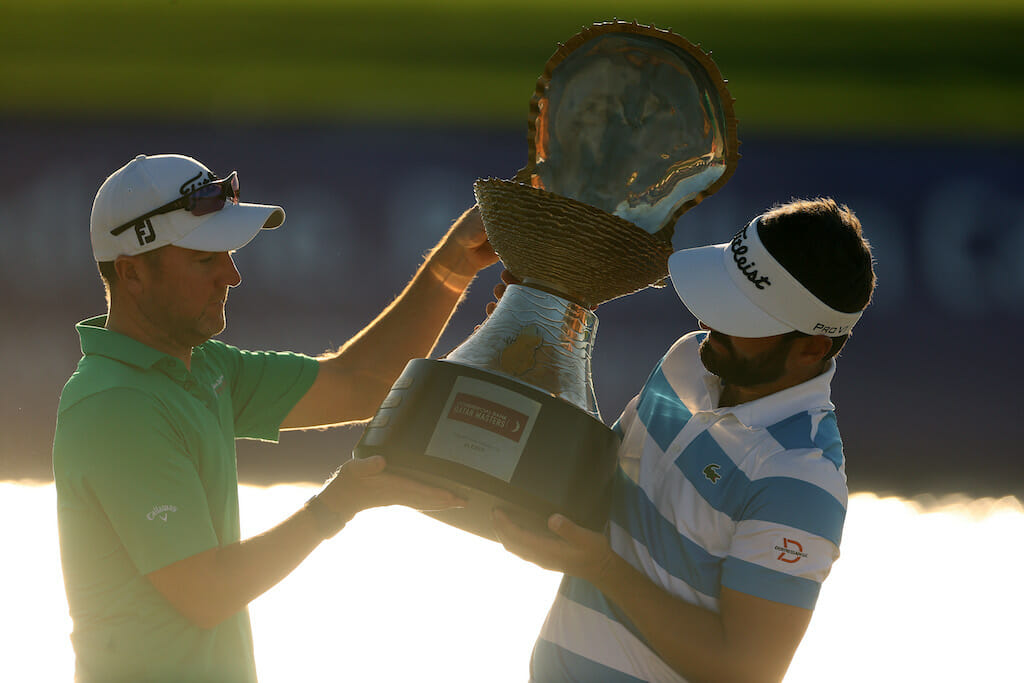 Frenchman Antoine Rozner was again singing the praise of Irish-born caddy Darren Reynolds after capturing a second European Tour title in six events with victory at the Commercial Bank Qatar Masters in Doha.

Rozner became the first French player in the 23-year history to win in Qatar by sensationally holing a 60-foot birdie putt at the 72nd hole on the Education City course. The 28-year-old Parisien secured a first Tour victory last December at the inaugural Golf in Dubai Championship the week prior to the season-ending DP World Tour Championship, both events at Jumeirah Estates. On the bag also in Dubai for that breakthrough win was Reynolds.

Now Rozner, working under Benoit Ducoulombier, who also coaches Victor Dubuisson, has won for a second time in the Middle East, and in the process has become the quickest Frenchman to win two tournaments in just 29 appearances.

“I am feeling amazing as winning a golf tournament is so rare and to win twice in just a few months is unreal and I am very happy to have got it done today,” he said. “The putt on the 18th was amazing as I knew it was going to be very fast and it was important to have the right speed.  I was just trying to get it close as two putts was going to be very important to force a play-off.

“I knew I had to hit it well and have a good read on it and about 15-feet short of the hole I thought to myself ‘Oh, this is going to have a chance’ and it went straight into the hole. My caddy had said to me to be patient as it will drop, it will drop and he was right. It was the best part of my career.”

Rozner and Reynolds are into their second year together with the Irish caddy on the bag when Rozner won on the ‘Fire’ course at Jumeirah Estates late last year. Reynolds was the former long-time caddy to Paul McGinley while more recently he caddied for Greystones Paul Dunne and was beside Dunne when he sensationally chipped-in for birdie at the last to capture the 2017 British Masters to deny Rory McIlroy.

“I was looking for a good experienced caddy and Darren’s player had to undergo surgery so it meant Darren was not working, so we agreed to start working together,” said Rozner.

“The great thing with Darren he is very experienced. This is his 24th season and he’s worked with some great players and most of the golf courses we play, he knows them very well having been on the European Tour for a long time.

“He knows what it takes to win. He knows what it requires to compete at a high level, so he has brought a lot of confidence to my game. There was some problems today with the scorecards and I had trouble keeping up with the scores but Darren was on top of it and knew what we need to do, so he was again great today. Darren and I are both very happy working together”.

The win will see Rozner jump from 97th to a likely 63rd in the World Rankings with Victor Perez the leading tri-colour golfer at 36th.

Three players finished runner-up at seven-under par including Italian Guido Miglozzi, who posted a bogey-free 65, South African Darren Fichardt, with the 2013 Qatar champion holing a birdie also on 18 in a round of 71 after leading overnight, and India’s Gangeet Bhullar, who superbly birdied two of his closing three holes in a score of 69.

Ardglass pro Cormac Sharvin finished just outside the top-60 in posting a closing day 72 for an eight-over par tally.