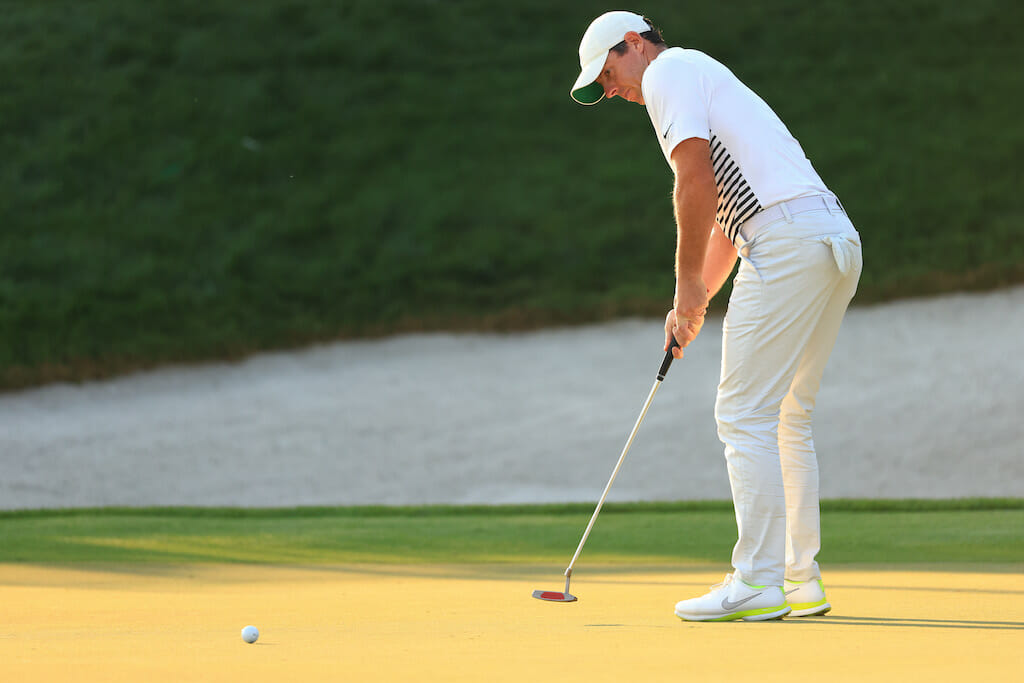 The Rory McIlroy roar was somewhat muffled on day two but he remains very much in the frame heading to the weekend rounds of the Arnold Palmer Invitational in Orlando.

McIlroy had been sharing the lead on day one but after a second round 71, he heads to day three two shots behind Florida-based Canadian Corey Conners (67) who leads the field on nine-under par. Conners had been tied with McIlroy on day one of the €7.8m event at Bay Hill.

Scotland’s Martin Laird, winner of the event a decade ago, grabbed an eagle and four birdies in his score of 67 to be in second place on eight-under par. Three players – McIlroy (71), Norwegian sensation Viktor Hovland (68) and American Lanto Griffin (68) – share third place on seven-under par. Bryson DeChambeau (71) is a shot further back on six-under par.

McIlroy went into the second round dropping a shot at the first but he superbly regrouped with three birdies in four holes from the third. The current World No. 8 holed a four-footer at the third, an 18-foot gem at the fourth and then a seven-footer at the par-5 sixth hole where McIlroy hit a booming 335-yard drive over water at the boomerang-shaped hole.

There were now plenty of ‘Go Rory, Go Rory’ calls from a 25% capacity Bay Hill crowd as McIlroy moved to two-under for his round. Though he dropped a shot at the eighth to make the turn in just one-under, he had recorded just 10 putts, two putts at his first hole and then eight single putts.

McIlroy headed into the home nine single-putting, from just four feet, the par-5 12th hole but gave the shot back at the next after a poor drive, being forced to chip out from trees. He then ended his round with five straight pars and just 26 putts, admitting to a much more challenging Friday than the fluid play of his opening 66.

“Today was a bit more of a battle but I stayed patient,” said McIlroy. “I picked off three of the par-5s, which is good around here. When I put it in trouble, I got it out of trouble. There were a couple of really loose tee shots, one on the 8th hole, I made bogey from there.

“I hit a few better shots coming down the stretch, but just going to go and work on a couple of things here on the range. It could have been the round that I shot 74 or 75, I got in with 71 and I’m pretty happy with that.”

Padraig Harrington ended a run of two missed cuts at Arnie’s event to earn himself a place over the weekend with rounds of 70 and 74 for a level par tally. Harrington was even par at the turn thanks to birdies at the sixth and seventh holes but dropped shots on the third and ninth holes before a run of seven straight pars ahead of a pair of closing bogeys.

Shane Lowry has the weekend off with scores of 75 and 74 for a five-over par total, the same 36-hole tally as Graeme McDowell. McDowell’s wretched year continues in missing a third cut in four events this new season.

GMac had a horror Bay Hill opening 79 and while snatching five birdies on day two, a second hole double-bogey when he found water guarding the green stands out like a sore thumb on his scorecard of a two-under 70.

While McIlroy and Lowry will tee-up in Thursday’s flagship Players Championship, Harrington and McDowell will have a week off before rejoining the Tour at the March 18th starting Honda Classic. Harrington is a double winner at PGA National in Palm Beach Gardens.