How far did Shepard hit his ‘Moon shot’ 50 years ago this week? 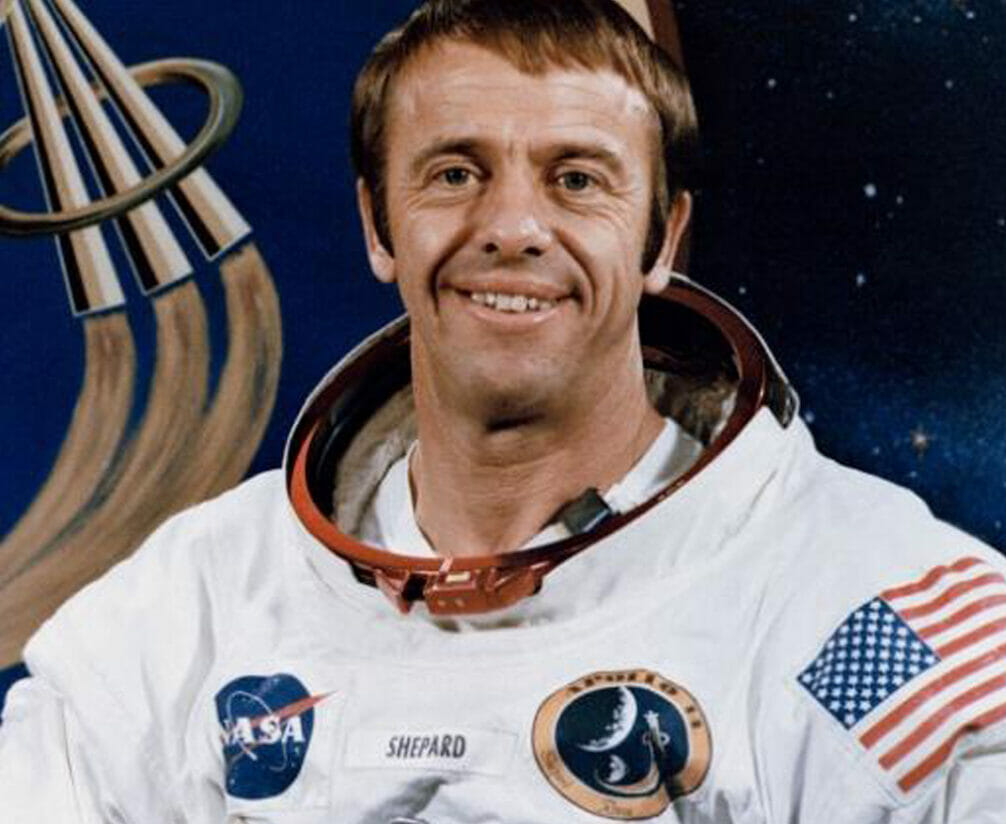 Apollo commander, Alan Shephard who hit two golf shots on the Moon 50-years ago this week on 6th February, 1971

Golf’s first tee shot on the surface of the Moon was not an out-of-this world drive but an ugly shank! This week marks the 50th anniversary of American astronaut Alan Shepard sneaking a golf club and golf balls in a sock on board Apollo 14 to hit the first, and still only, golf shots on the Moon – 6th February, 1971.

Shepard was commander of the lunar mission and headed for the surface of the Moon. In 1961, he had become the first American to travel in space, then in 1971, Shepard, at age 49, became the fifth human to set foot onto the Moon.

What made the Apollo 14 mission extra special was Shepard hitting two golf balls with his lunar 6-iron, while a javelin pole was hurled by crew-mate Edgar Mitchell as part of an authorised ‘lunar wind’ experiment. It was the golf shots that everyone will remember.

And when quizzed on one of the more famous golf shots in space, Shepard laughed the first he shanked and the second: “I hit miles and miles and miles!” The club we know was a ‘fold-up’ 6-iron that is on display in the USGA museum at Far Hills, NJ.

There’s very poor TV footage of Shepard’s attempt to hit golf balls on the surface of the Moon but thanks to imaging specialist Andy Saunders, he’s been able to determine just how far Shepard did hit the golf balls all of 50-years ago

British-born Saunders is author of the upcoming book Apollo Remastered and has shared the images of Shepard’s golf shots on his social media page. He used a known scale from images taken by the Lunar Reconnaissance Orbiter, a spacecraft launched in 2009 that took this photo in 2011, the point between divot and ball can then be measured.

In a superb BBC report, Saunders reckons reigning US Open champion Bryson DeChambeau, who currently heads the PGA Tour’s ‘driving distance’ category with an average drive of 329-yard on Earth, would drive the ball 3.41 miles, with time in the rarefied air of 1 minute and 22 seconds, if hitting on the surface of the Moon. So, what we now eagerly want to know is how far did Shepard hit his two golf shots. 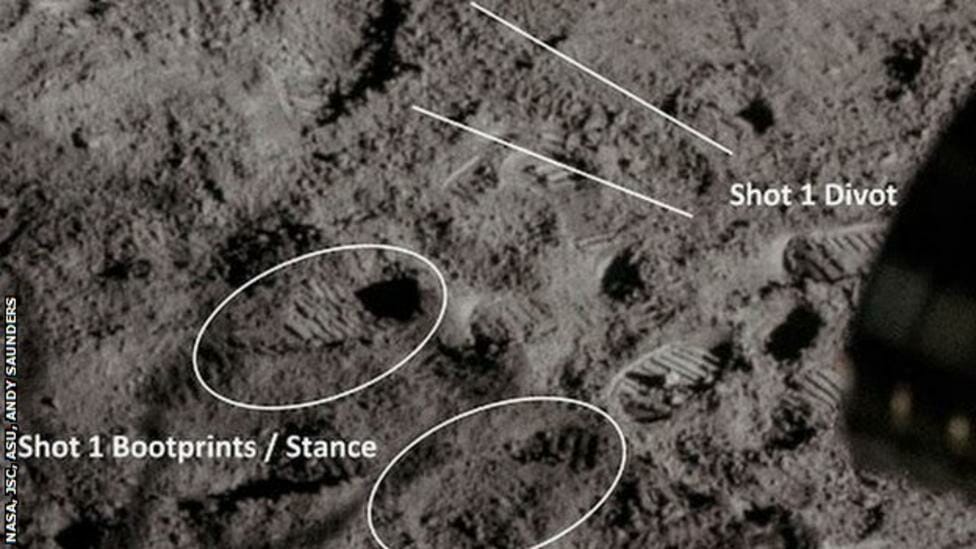 Using a known scale from images taken by the Lunar Reconnaissance Orbiter, a spacecraft launched in 2009 that took this photo in 2011, the point between divot and ball can then be measured 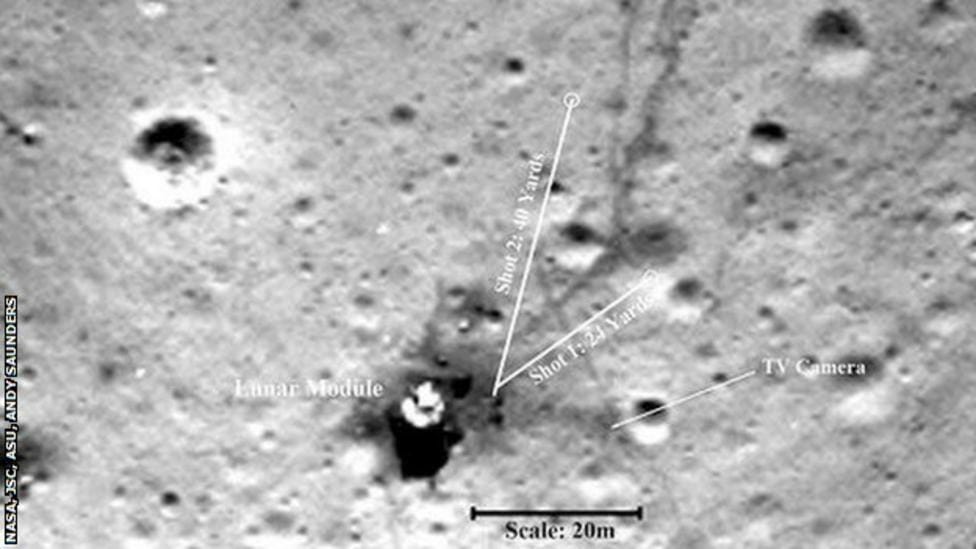 “Looked like a slice to me, Al,” quipped Fred Haise in Mission Control after watching Shepard’s first shot that he hit into a nearby crater. Given the known location of the TV camera, Shepard’s bootprints can be identified, showing his stance for his first two attempts – when he took “more dirt than ball” 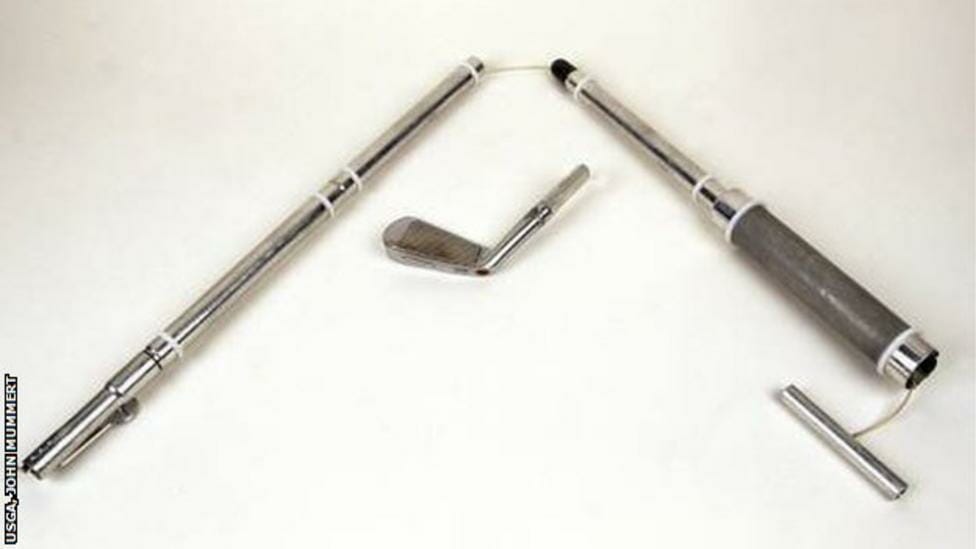 Alan Shephard’s famed 6-iron he used to hit two golf balls on the Moon. The club now on display in the USGA museum in NJ 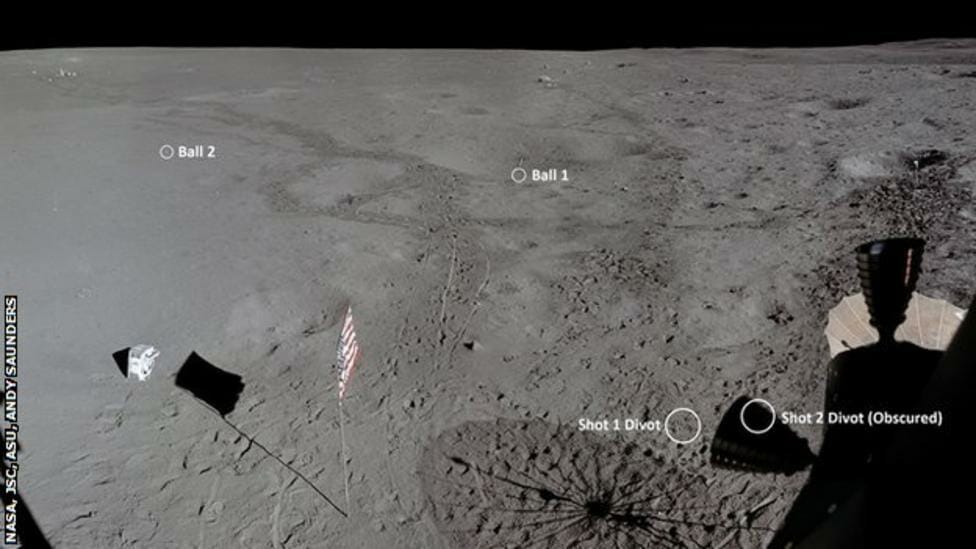 This image consists of six photographs taken from the Lunar Module, enhanced and stitched into a single panorama to show the landing scene, along with the location from where Shepard hit the balls

“We can now fairly accurately determine that ball number one travelled 24 yards, and ball number two travelled 40 yards,” said Saunders. “Unfortunately, even the impressive second shot could hardly be described as ‘miles and miles and miles’, but of course this has only ever been regarded as a light-hearted exaggeration

“The moon is effectively one giant, un-raked, rock-strewn bunker,” continues Saunders. “The pressurised suits severely restricted movement, and due to their helmet’s visors they struggled to even see their feet. I would challenge any club golfer to go to their local course and try to hit a six-iron, one-handed, with a one-quarter swing out of an unraked bunker.

“Then imagine being fully suited, helmeted and wearing thick gloves. Remember also that there was little gravity to pull the clubhead down toward the ball. The fact that Shepard even made contact and got the ball airborne is extremely impressive.”