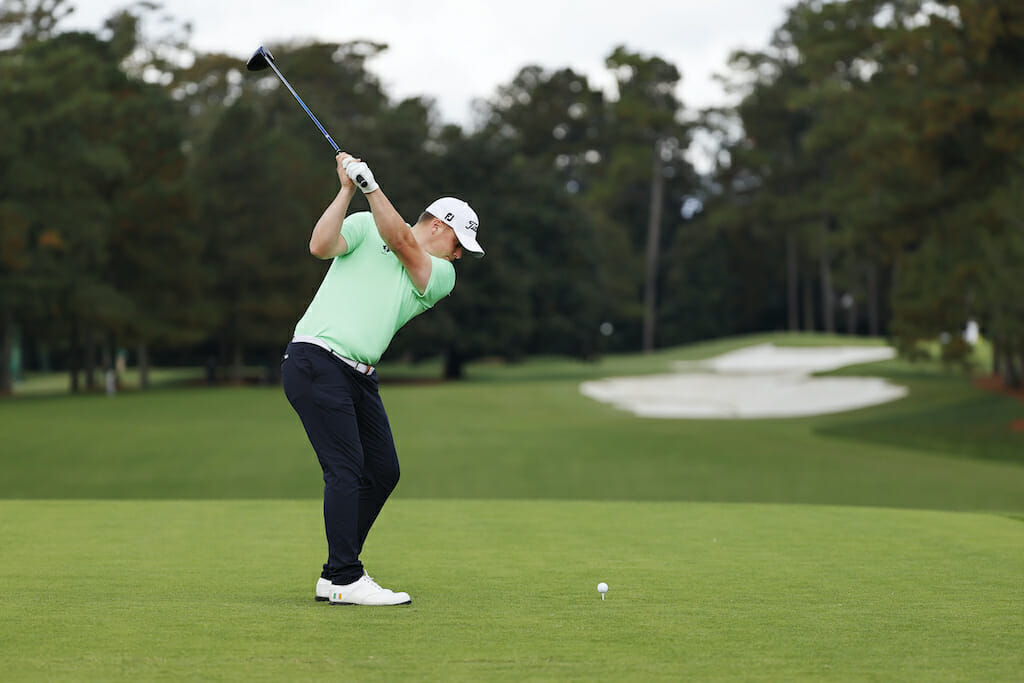 James Sugrue in action at the Masters

James Sugrue admits he’s champing at the bit to get his professional career up and running after signing for Swedish-based management company Sportyard.

The Mallow man, who turned professional in a personal best fifth place on the world amateur golf rankings, making him the top male European amateur when turning pro, is confident of banking a few early starts having won The Amateur in 2019 and played Walker Cup, though Covid-19 has made things a lot trickier than previous years.

“My manager is talking to tournament directors trying to put some sort of a schedule for me,” Sugrue told RTE Radio 1. “If you play Walker Cup they usually give you seven starts on the European Tour but Covid has put the cat among the pigeons, but everyone else is in the same boat. I’m looking at March or April now and I can’t wait to get going.”

Sugrue has been ready to turn pro for some time now but given the doors his Amateur win at Portmarnock opened for him, and the way playing schedules have been impacted by Covid, there’s been no rush on him either.

“I had always planned to turn pro once I won the amateur,” he said. “My amateur world ranking is the best it’s ever been and it’s trending in the right direction. To get to European number one is lovely to finish my amateur career. And it’s great when looking for management and sponsorship.”

“Without a doubt, it has changed my life drastically [The Amateur win]. It’s been an unbelievable journey, but definitely hampered by Covid. To get to play in three majors, one of the greatest prizes for winning an amateur event. Now it’s time to try to play professional golf every week.”

His appetite was whet by recent forays amongst the pros that many professional golfers play their whole careers and go without. Two rounds with former Open Champion Darren Clarke at The Open at Portrush, a drive up Magnolia Lane for the Masters and a US Open debut at Winged Foot will standout as highlights. A former South of Ireland Champion and Walker Cup player, he also enjoyed appearances amongst the pros at last year’s Irish Open and the European Tour’s Oman Open. Has he picked up on things from those visits to the paid ranks that he must improve to make a real go at his own career?

“I have spent a lot of time recently doing a lot of putting over the past three or four months. That’s what I took from my experience. Whoever putts the best generally wins every week. And the guys I played with were really good putters, really clinical from eight feet and in,” he said.

Sugrue joined Sportyard whose past clients include Johan Edfors, Carl Pettersson, Martin Kaymer, Alvaro Quiros and European Ryder Cup vice-captain Robert Karlsson, who since returned to the Swedish outfit in 2017.