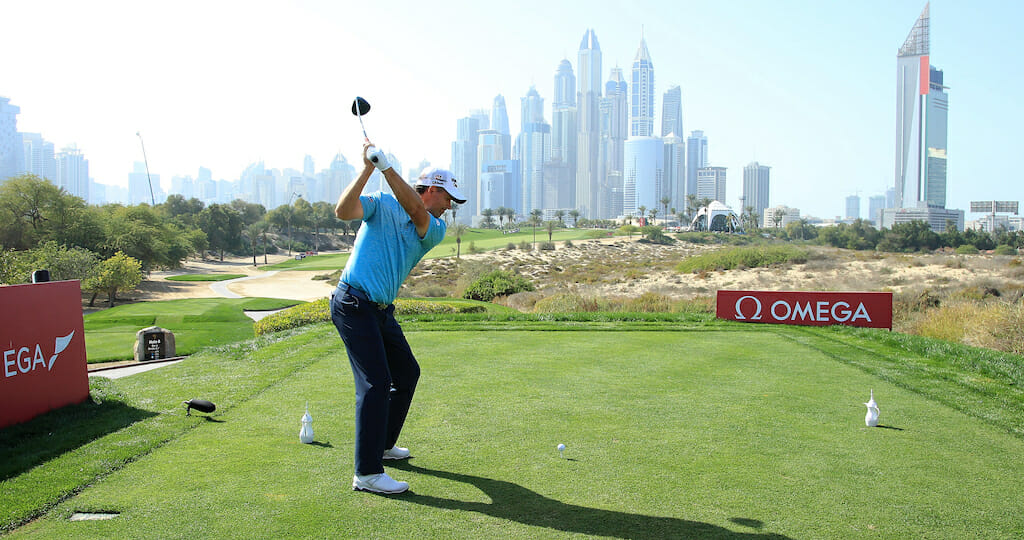 Padraig Harrington tees off on the 8th hole during Day Two of the Omega Dubai Desert Classic at Emirates Golf Club. (Photo by Andrew Redington/Getty Images)

Europe’s Ryder Cup captain made it two halfway cuts from as many new season events thanks to a second round 69 for a four-under halfway tally at The Emirates Club in Dubai. Scottish lefty Robert MacIntyre, who played alongside Harrington last week in Abu Dhabi, put himself into contention for a second Tour victory in only five events with a bogey-free 68 to muscle his way to a share of second place at nine-under par.

MacIntyre had held the clubhouse lead till very late in the day before being overtaken by Belgium’s Thomas Detry who posted a 68 to lead by a shot at 10-under par. New British No.1 Tyrrell superbly turned around a horror first round 76 after last week’s Abu Dhabi win to regroup with an eagle and eight birdies in a 64 to get back to four-under and tied with Harrington.

Harrington had his own horror show in making a mess chipping into the first green before walking off with a double-bogey ‘6’ but he too bounced back, seeing the lighting-fast holes more like a bucket to sink four birdies in a row from the second. He dropped a shot at the sixth for a second day in a row but got the shot back at the next and then birdied 13, bogeyed 15 and picked-up a birdie on 17 for his 69 to be heading to the weekend sharing 23rd spot at four-under.

“It was good to birdie four in a row there at the start but it’s been strange as I have been playing well but not as well this week, but I’m putting well,” he said. “The greens are tough though I’ve got a good attitude on the greens, and I’ve rolled the ball really well and it was nice to see a few drop today, as I did make seven birdies, so that’s nice to happen.

“Overall, I am just happy every putt was running at the hole but as I said, these are incredibly quick and incredibly intimidating greens at the moment so to have made so many birdies on the greens as they are at present was really nice.

“The only thing that was poor was my chipping as evident in taking three chips at the first to take double from nowhere while a couple of other chips were poor, so if I can get rid of those mistakes, I should have a better weekend.”

Fellow Open Champion Shane Lowry will join Harrington over the weekend after adding a level par 72 to his opening 70 to be two shots back at two-under par. Not so good for Graeme McDowell who’s now heading to next week’s Saudi International defence after missing a second new season cut in succession with scores of 76 and 73. McDowell managed just five birdies but doubled that number over the two rounds in bogeys.