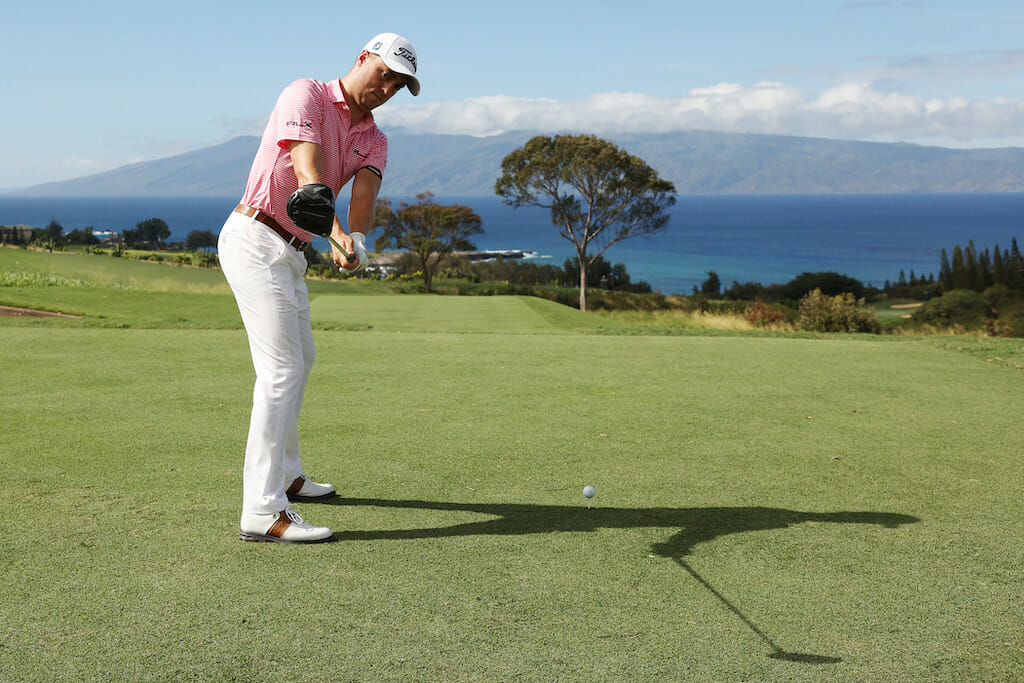 Defending champion Justin Thomas might just prove the man to beat this week once more after the American fired an eight-under par round of 65 to share the lead with Harris English after day one of the Sentry Tournament of Champions.

It proved a bogey-free round for JT on his seasonal reappearance, but only after a miracle par on the par-4 13th. What looked a hopeless search for a lost ball in native grass was turned on its head when Austin Johnson, brother of Masters champ DJ, stood on Thomas’ ball. And the world number three wasn’t about the waste his slice of luck – hacking out sideways before finding the green and holing a raking 37-foot putt for par. He birdied the next two holes and added another at the last to ensure he hit the new year running in Hawaii.

“I think I owe a big `thank you’ to AJ for stepping on my ball and finding that one for me,” Thomas said. “Those par saves can definitely be a little bit more momentum boost than a birdie sometimes. I’m a big fan of bogey-free rounds, so that putt was nice to keep it that way.”

It was a picture perfect day to tee off the season on the western edge of Maui with half of the 42-man field taking advantage to shoot in the 60s on the Plantation Course. The tournament features more than just PGA Tour winners for the first time, now including anyone who made it to the Tour Championship given the number of cancelled tournaments due to Covid last season.

That’s how English qualified for this week, though his 2020 was more than a little special, even if it lacked an individual win. Starting last season with conditional status and at No. 369 in the world when he lost his full PGA Tour card, he did well enough to finish 12th in the FedExCup and starts this year at No. 29. His only victory was joining Matt Kuchar in the two-man team QBE Shootout last month, but after holing a pitch for eagle on the par-5 ninth and finishing with three birdies in his last five holes, English might just earn that ‘W’ he threatened for most of last season at the first time of asking in this one.

“Chipping in on No. 9 for eagle was kind of icing on the cake on the front nine and gave me some good mo going into the back nine,” English said. “I felt like I hit my irons well, I hit my wedges well, and just gave myself a lot of chances.”

Sergio Garcia, playing at Kapalua for the first time in 15 years, was next best among those at six-under par, with Adam Scott in the group at 68. World number one Johnson, making his first start since his Masters victory in November, showed some rust before signing for a two-under 71.

After day one, the story is Thomas trying to become the first back-to-back winner at Kapalua since Geoff Ogilvy in 2010. He gave up a late lead last year and needed some help to get into a playoff when Xander Schauffele three-putted the last hole for par. After some fine play on Thursday he surmised, “The conditions were about as good as you get them,” adding, “I was glad to take advantage.”