Kearney looking to bring intensity to Golf in Dubai weekend 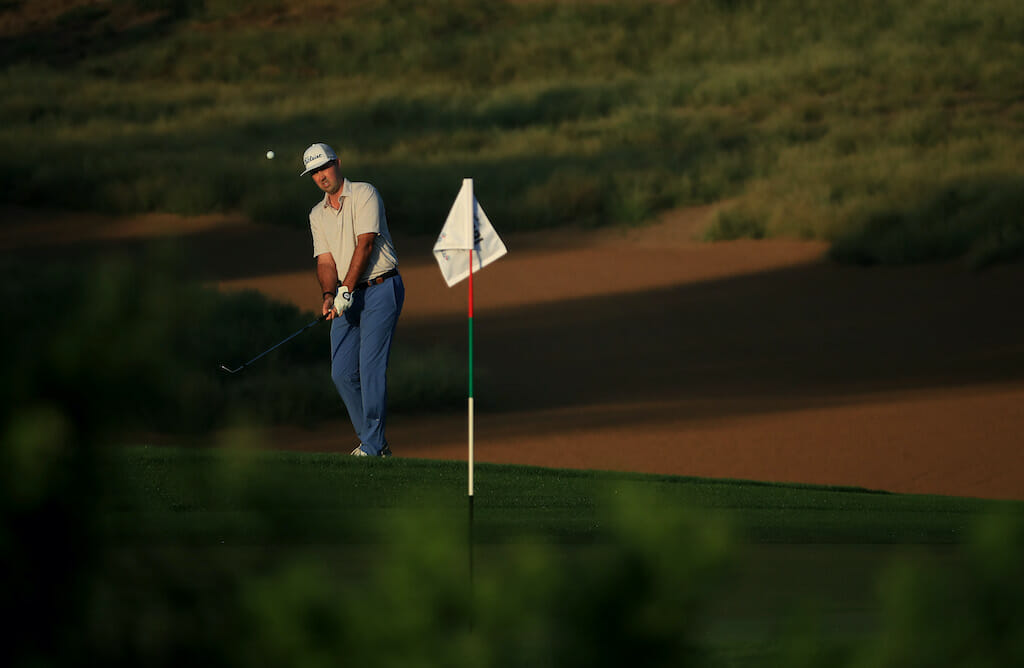 Niall Kearney is hoping to bring an intensity to his weekend play to ensure he signs off on his last tournament of the season in style at the Golf in Dubai Championship presented by DP World.

The Royal Dublin professional needed a fast start on Friday to keep up with the scorching hot scoring around the aptly named Fire Course at Jumeriah Golf Estates, and managed to do just that, firing seven birdies in a five-under par round of 67 to skate into the weekend at six-under par.

“I’ve played very well the last couple of days,” Kearney reflected, sharing 42nd at the halfway stage in Dubai having opened with a one-under par round of 71. “I got some nicer yardages today and was able to hit it a bit closer and gave myself opportunities to score. Scoring has been pretty hot even though the course isn’t playing that easy. Pins are really tight so you’ve got to hit really good approach shots to get close but overall I’m playing really well. The weather is perfect, there’s hardly a breath of wind and I’ve been able to drive the ball great so giving myself plenty of chances to take advantage.”

Far from sauntering into his final weekend of the season with the attitude of a pay-cheque guaranteed, Kearney is looking to hit the ground running on moving day to make indents into Andy Sullivan’s lead atop the board at 17-under par. Having seen his Challenge Tour schedule obliterated by Covid-19 this term, two good results last month in Spain and now this performance in the desert means Kearney is hitting his stripes just as his season reaches its finish, but that’s not to say a big weekend won’t provide a bundle of belief and motivation ahead of the off-season and doing it all again in 2021.

“It’s obviously been a very strange year and it looks like this will probably be my last tournament of the season but I’d like to keep playing the way I’m playing,” Kearney added.

“I had a great preparation with my coach Eddie Doyle down at The Heritage prior to coming out here. I feel like the game is strong so I’d like to bring a bit of intensity to the weekend rather than easing into it because it’s the last one of the year. It would be great to bring that intensity to it, shoot a couple of good scores and finish the year off nicely.”

Indeed, a big cheque this week would bode well for some winter training for one of the most hard-working pros in the game but even a mild evening under the floodlights in Dubai  couldn’t tempt Kearney out to the practice range before getting into his weekend work.

“It actually gets dark here very early,” Kearney said. “I’m looking out my window here and it’s falling fast but it was actually pretty hot out there today so everyone’s a little bit jaded so no, early night, a little bit of food and back at it tomorrow morning. I’m looking forward to it.”

At the top, Sullivan cruised into a three-shot lead at the halfway point with his 17-under tally coming close to breaking a new European Tour record for lowest 36-hole score. The 33-year-old already has one victory under his belt this season, having won the English Championship in August by a remarkable seven strokes with a 27-under total.

Sullivan revelled in the low-scoring conditions once again on the Fire Course at Jumeriah Golf Estates as he carded five birdies and his first eagle of the week to sign for a six-under 66 to add to his opening 61 – with his 17 under halfway total one shy of Ernie Els’s 18 under total at the 2004 Heineken Classic.

“We spoke about it to my psychologist before I went out, it’s basically just about staying patient and give yourself as many chances as possible,” Sullivan said about the mindset behind his halfway performance. “It is hard, I really had to work hard at staying patient, when I was three under through nine it didn’t feel as good as yesterday, but you know you’re still on the right track. I knew I was swinging it well and if I could keep giving myself opportunities I could make a few coming in. If you’d told me I’d shoot 61-66 I’d have snapped your hand off.

“My processes were really good. I felt like I went through everything I should have done, I was seeing the lines really well. Pace was a bit firm today and I hit a few a few feet by, which is why I missed on the high side a few times. I just stuck to my process, it’s the only thing I could control out there and it has been working.”

Sullivan put some daylight between the former Ryder Cup player and his English compatriots Ross Fisher and Matt Wallace, who shared second place on 14 under heading into the weekend. Scotland’s Craig Howie, German Max Schmitt and Antoine Rozner of France were all two strokes further back while Gavin Moynihan added a 74 to his opening 77 to miss the cut by ten strokes at seven-over par.